Candidate's use of corporate planes at issue 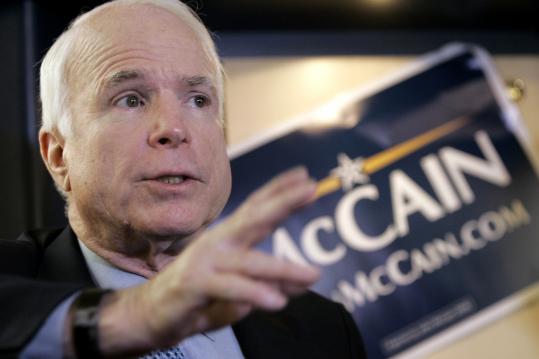 Republican John McCain's campaign appears to have violated its own stated policy of not using the aircraft of companies with lobbying interests in Washington for campaign travel, according to a Boston Globe review.

The practice is legal, and the campaign of McCain, long an advocate of campaign finance reform, has changed its policy over the past year on use of private planes - from banning such corporate-jet travel to allowing limited use. McCain is the only remaining candidate who has flown on corporate jets during the campaign. Neither of the Democratic presidential candidates, Hillary Clinton and Barack Obama, uses private jets, and both have flown on commercial charter flights since the outset of the campaign.

Until September, when new ethics reforms went into effect, candidates were allowed to fly on corporate jets provided by supporters and pay only the equivalent of first-class airfare, even if the plane was a top-end corporate jet that would have cost many times that amount to charter. After Sept. 14, candidates had to pay the market-rate cost of renting such aircraft, and those who were making use of the loophole switched to commercial charter jets to transport the candidate, staff, and surrogates.

Last December, McCain spokeswoman Jill Hazelbaker told the Globe that McCain took no corporate travel but "on a few occasions, prior to the passage of the law" flew on the jets of "individual supporters." Many are major McCain fund-raisers.

But when the Globe last week identified campaign reimbursements to at least 10 corporations for private jet transport both before and after Sept. 14, another McCain spokesman said: "The campaign will not fly on private aircraft owned by public corporations employing lobbyists."

A check of the Senate Clerk's database of lobbyist reports, however, revealed that one company, Molded Fiber Glass Companies of Ashtabula, Ohio, that provided transportation last year for McCain, retains Washington lobbyists for Department of Defense appropriation bills and another plane provider, Harry Sargeant III of Gulf Stream, Fla., owns two companies that have used lobbyists in the past and another that provides fuel to the Defense Department.

Molded Fiber Glass was paid $1,183 last August before the reforms went into effect, and the company that owns Sargeant's aircraft was paid $2,619 shortly before the Florida primary in January under the new rules. Sargeant, a close friend of Florida Governor Charlie Crist, a key McCain supporter, hosted a fundraiser for McCain at his home last month.

McCain spokesman Tucker Bounds said in an e-mail Friday that both flights "were completely permitted under campaign finance regulations, and until today we did not even realize the two instances didn't meet our internal standard, which is a much higher ethical standard than the previous or current law even requires."

The reported today that over a seven-month period beginning last summer, McCain's cash-short campaign used a corporate jet owned by a company headed by his wife, Cindy McCain, according to public records. For five of those months, the plane was used almost exclusively for campaign-related purposes, those records show.

According to the Times, McCain's campaign paid a total of $241,149 for the use of that plane from last August through February, records show. That amount is approximately the cost of chartering a similar jet for a month or two, according to industry estimates, the Times reported.

McCain was able to fly so inexpensively because the law specifically exempts aircraft owned by a candidate or his family or by a privately held company they control. The Federal Election Commission adopted rules in December to close the loophole - rules that would have required substantial payments by candidates using family-owned planes - but the agency soon lost the requisite number of commissioners needed to complete the rule making.

Because that exemption remains, McCain's campaign was able to use his wife's corporate plane like a charter jet while paying first-class rates, several campaign finance experts said. Several of those experts, however, added that his campaign's actions, while keeping with the letter of law, did not reflect its spirit.

The use of private planes constitutes a small amount of the transport costs of the McCain campaign, which through the end of March had spent more than $3.2 million on commercial air charters. A Globe review of campaign finance reports identified 13 private companies, all with executives who contributed or raised funds for McCain, that were reimbursed a total of $78,000 for air transport.

Roughly half the amount was paid prior to last Sept. 14 when the new ethics reform law went into effect, banning the longstanding practice that allowed candidates to pay discounted rates, a fraction of the true cost of the service. Since then, the campaign has reimbursed several companies that provided private aircraft the estimated cost of what a commercial charter flight company would charge for a similar plane, Bounds said.

The campaign gave up the policy of not using private jets when it was struggling financially in mid-2007 and McCain's rivals, Mitt Romney and Rudy Giuliani, were frequent flyers gaining a financial advantage from low-cost corporate jets made available by supporters under the reduced "first-class" rates. Last December, the Globe reported that Giuliani's campaign had paid 26 companies a total of $703,000 under the old discounts, and Romney's paid 27 companies nearly $300,000.

Among other businesses that the McCain campaign last week acknowledged had provided private aircraft for the campaign under the old discount rates before the ethics reform were:

Other companies that provided aircraft to the campaign include: McKinley Inc. of Ann Arbor, Mich., a national real estate investment company founded by Ronald Weiser, a McCain national finance committee cochairman, $5,192 in January under the full commercial rate; PVS Chemicals Inc., Detroit, Michigan, headed by McCain supporter James B. Nicholson, $1,299 for a flight under the old first-class fare rate last August, and $17,385 for two flights under the higher commercial rate; Web Service Co., a Manhattan Beach, Calif.,-based company that manages laundry rooms in 30,000 apartment buildings and is headed by William E. Bloomfield, $3,407, last September, and Red Eagle Ventures of San Francisco, Calif., a private equity firm chaired by David S. Pottruck, who is also a member of the board of , was paid $5,314, last September for a day of flights to four cities in California.