Many see success in focus on abuse 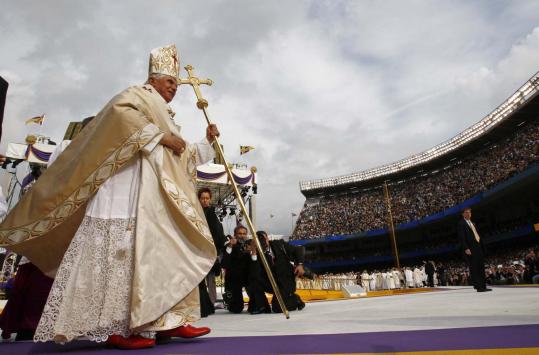 NEW YORK - Pope Benedict XVI boarded the chartered plane dubbed Shepherd One last night and headed back to the Vatican, concluding a dramatic six-day trip to the United States that introduced him to a wary public and surprised many with his repeated attention to the clergy sexual abuse crisis.

The pontiff, who celebrated both his 81st birthday and the third anniversary of his pontificate during his trip, addressed distinctly American concerns in iconic American settings, from the White House and Fifth Avenue to ground zero and Yankee Stadium.

For many Catholics, Benedict's visit was an unexpected and overwhelming success. And, ironically, although many church officials had feared that the abuse crisis might overshadow the trip, analysts now believe that Benedict's focus on the issue, which included an unprecedented meeting with victims from Boston, improved his image and that of his church.

"Benedict's visit exceeded even the most optimistic hopes," said Mathew N. Schmalz, an associate professor of religious studies at the College of the Holy Cross. "Benedict has now fully emerged from the shadow of John Paul II," his predecessor.

Yesterday, on his final day here, he symbolically empathized with the country's pain by praying silently at the site where terrorists on Sept. 11, 2001, felled the twin towers. And he paid tribute to his flock's aspirations with a homily reflecting on the history of American Catholicism, which this year marks the bicentennials of several archdioceses, including Boston.

"In this land of freedom and opportunity, the church has united a widely diverse flock in the profession of the faith and, through her many educational, charitable, and social works, has also contributed significantly to the growth of American society as a whole," he declared during a rapturous Mass at Yankee Stadium attended by 57,000, many shouting "Viva!" and "Benedetto" as they waved the Vatican's yellow and white colors in the air. "The future of the church in America must even now begin to rise."

Benedict had a lot riding on his visit. He was viewed skeptically by many because of his reputation as John Paul II's theological hatchet man, who disciplined wayward theologians and disparaged non-Catholic faith groups. His compulsory stint in the Hitler Youth, and his thick German accent, didn't help his image, nor did the comparison with John Paul II, whose charisma and exuberance endeared him to millions.

"In some quarters, a caricature of the man prevailed: intolerant, severe, cerebral," said the Rev. Robert P. Imbelli, an associate professor of theology at Boston College. But on this visit, "What came through, in so many of the images and words, was the respectful, attentive, pastoral side," he said.

"Pope Benedict exhibited a charm and warmth that surprised many Americans," said Chester L. Gillis, a professor of theology at Georgetown University. "While I don't believe that a papal visit fills the pews after he has gone, I do think that American Catholics, by and large, are holding their heads high as a result of this visit."

R. Scott Appleby, a professor of history at the University of Notre Dame, called the trip "nearly flawless."

"Pope Benedict XVI said all the right things, used symbolic and ritual-liturgical moments to great effect, reached out to victims, displayed his own humanity, and resisted the temptation to make the UN address as long as the catechism," Appleby said. "In his careful, shrewd, heartfelt, disciplined performance - and kudos that he realized that such a visit is, and must be, first and foremost, a performance - he did more than could have been reasonably expected to begin the long process of restoring trust and moral credibility to a church whose fortunes on these fronts are flagging."

Benedict's homilies and speeches were dominated by exhortations to prayer and faith in Jesus, and contained few references to specific public policy matters. He did not mention the Iraq war, made only passing references to abortion, same-sex marriage, and environmental protection, and offered only general thoughts about the importance of welcoming immigrants. The main theme of his trip was hope.

Analysts said that Benedict's trip succeeded not only because of the outreach to victims but also because his professorial style - Benedict is a renowned theologian and prolific writer - played well with Americans accustomed to straight talk. Benedict also benefited because expectations were low; he was viewed as stern and reclusive, so his every smile and wave was greeted as a victory.

"Americans saw him being very pastoral and gentle in public, responding to the warmth of the crowd, reaching out to victims of sex abuse, so he seemed kinder than they were led to believe when he was elected," said John L. Allen Jr., a journalist at the National Catholic Reporter and the author of a biography of Benedict. "And he strikes them as candid, because he didn't duck the sex abuse questions. Although there are legitimate questions about what policies will follow, he isn't burying his head in the sand."

"I think Catholics, and the world in general, have been hard on him," said Michelle Darling, 51, of Marlborough, who attended the Yankee Stadium Mass with her family. "He came after a great pope and he had big shoes to fill. And in Boston, with all the scandal, people expected a lot; they had a lot they wanted addressed. But I think he did that."

Benedict's repeated mentions of the abuse crisis - he spoke about it on four of his six days in the United States, calling the abuse "evil" and saying the phenomenon had caused him shame - clearly struck a chord with American Catholics. Over and over again yesterday, Catholics brought up his handling of the issue as they reflected on his trip.

"I didn't know much about him, but now I feel like he's going to lead the church in a good direction, and I feel more at ease with some of the things that have gone on," said Tom Dunn, 35, of Brooklyn. Adlette Charmant, 47, of Jamaica, N.Y., called the trip "very moving," saying, "he made people understand, 'I'm not going to turn a blind eye to scandals,' " while Melissa Kennedy, 43, of East Williston, N.Y., said, "He really has made a great effort to reach out to people here and apologize for the scandal, and that has made a great difference to people."

The pope departed on his chartered 777 from John F. Kennedy International Airport at about 9 last night, after a brief farewell ceremony attended by about 3,000 people, many of them immigrants.

"With these words, I take my leave, I ask you to remember me in your prayers, and I assure you of my affection and friendship in the Lord," the pope said at the airport. "May God bless America!"