THIS STORY HAS BEEN FORMATTED FOR EASY PRINTING
THE PAPAL VISIT

At ground zero, a prayer for peace 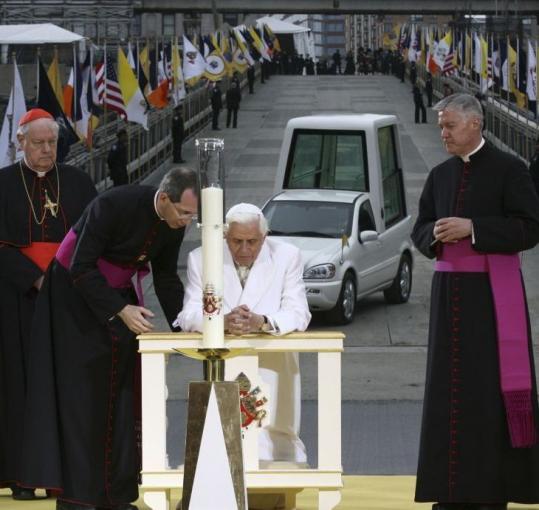 NEW YORK - Eighty feet below street level, surrounded by cranes, backhoes, pipes, and jagged rock, Pope Benedict XVI asked God to "bring peace to our violent world" and clasped the hands of survivors and relatives of those who died here on Sept. 11, 2001.

Commemorating the dead where the World Trade Center once stood, the 81-year-old pontiff said little beyond his prayer for peace. The 30-minute ceremony was as brief as it was stark.

As a thick, cold fog shrouded lower Manhattan, the pope's bulletproof Mercedes descended to ground zero, down a ramp lined with the flags of the Vatican, New York City, New York State, New Jersey, and the Port Authority.

Waiting in the pit was a small crowd that included 16 relatives of the dead and several city and Port Authority police officers and firefighters who had responded to the attacks.

Emerging from his vehicle, wearing a white coat to stave off the cold, the pope walked into the center of the crowd. He knelt and prayed silently at a gold-and-white kneeler set before a pool of water and gravel. Then, he lighted a candle emblazoned with the papal seal and prayed aloud.

"God of peace, bring your peace to our violent world, peace in the hearts of all men and women and peace among the nations of the earth," he said, in part. "Turn to your way of love those whose hearts and minds are consumed with hatred."

After the prayer, the pope sprinkled holy water in four directions, blessing the site.

Then Cardinal Edward M. Egan of New York introduced the guests to the pope, one by one. They were men and women, with the officers in dress blues. Many knelt and kissed the pope's ring or took his hand and spoke.

"Today was an incredible experience to get to actually talk to the pope and ask him to bless the ground that we're on, because we lost so many beautiful people that day," said Salvatore Cassano, a city firefighter who is now chief of department and was Manhattan commander on Sept. 11.

Cassano, who is 63 and a 39-year veteran of the department, said he "got banged up" on Sept. 11, but "I was one of the lucky ones to stay alive." Three hundred forty-three firefighters died that day.

Yesterday, Cassano kissed the pope's ring, and the pontiff told him: "God bless you, and God bless the department."

"That was really important for us," Cassano said afterward. "We suffered so many heavy losses, it was nice to get the personal blessing from the pope, directly, for the people that we lost and the people that are still helping to protect the city."

Desiree Gerasimovich of New Jersey, whose sister, Pamela Boyce, was working on the 92d floor of Tower One and was killed in the attack, kissed the pope's ring and told him she was honored to be in his presence. She later called it a "wonderful moment, a surreal moment."

"I don't know if you ever find closure, but days like this make it a little bit better," she said.

The Archdiocese of New York gave each of the 24 people who met the pope a rough-hewn cross made from steel salvaged from the towers and a candle with a papal seal.

"This was a very important moment for all New Yorkers," Police Commissioner Raymond W. Kelly said. "This is sacred ground for New York and, of course, to have the pope visit it was very, very special for all of us, not just the people of the Catholic faith."