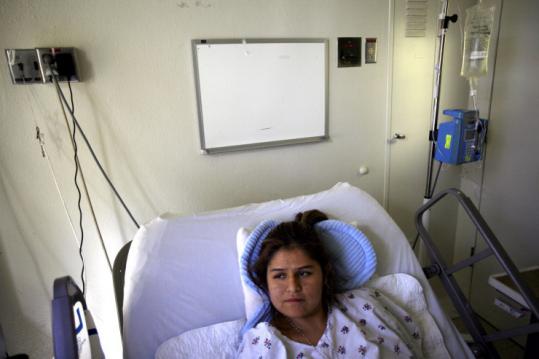 LOS ANGELES - Ana Puente was an infant with a liver disorder when her aunt brought her illegally to the United States to seek medical care. She underwent two liver transplants at the University of California, Los Angeles Medical Center as a child in 1989 and a third in 1998, each paid for by the state.

But when Puente turned 21 in June, she aged out of her state-funded health insurance and the ability to continue treatment at UCLA.

This year, her liver began failing again and she was hospitalized at County-USC Medical Center, affiliated with the University of Southern California. In her Medi-Cal application, a USC doctor wrote, "Her current clinical course is irreversible, progressive and will lead to death without another liver transplant." The application was denied.

The county gave her medication but does not have the resources to perform transplants.

Late last month Puente learned of another, little-known option for patients with certain healthcare needs. If she notified US Citizenship and Immigration Services that she was in the country illegally, state health officials might grant her full coverage through Medi-Cal, the state health services assistance program for the poor. Puente did so, her benefits were restored, and she is awaiting a fourth transplant at UCLA.

Puente's case highlights two controversial issues: Should illegal immigrants receive liver transplants in the United States and should taxpayers pick up the cost?

The average cost of a liver transplant and first-year follow-up is nearly $490,000, according to the United Network for Organ Sharing. Donor livers are in scarce supply. In California, nearly 3,700 people are on a waiting list for livers, according to the network. Last year, more than 90 percent were given to US citizens.

Donor livers generally are allocated through a geographic-based distribution system on the basis of how sick the patients are and how long they have been on the transplant waiting list. Immigration status does not play a role in allocating organs. But some people say that it should.

"All transplants are about rationing," said Roy Beck, executive director of NumbersUSA, which favors stricter controls on immigration. "I just don't think the public ought to be funding any kind of benefits for people who are breaking the law."

Larry Gonzalez, a US citizen who has hepatitis C, has known for a decade that he needs a new liver but was placed on the transplant waiting list only last week.

"Why do we have to get in line behind immigrants, foreigners, when we have enough people here to fill the hospitals?" said Gonzalez, 54, who lives in Ventura.

But Dr. Michael Shapiro, vice chairman of the ethics committee for the organ sharing network, said illegal immigrants have just as much right to receive organ transplants as US citizens. He said it is likely that more illegal immigrants donate organs than receive them. "People are people, and when you make an incision in an organ donor, you don't find little American flags planted on their organs," Shapiro said.

Illegal immigrant children with certain severe, chronic illnesses are eligible for funding under a state program. But the coverage ends when they turn 21.

State health officials said California law is designed so there is no gap in coverage, so children move seamlessly from state-funded treatment to county care. But that doesn't always happen. When they become adults, patients like Puente often must switch doctors and hospitals and might lose access to necessary medical care.

That break can be life-threatening. "It doesn't matter if I'm undocumented," Puente said. "They should take care of me at UCLA for the rest of my life because I've been there since I was a baby."