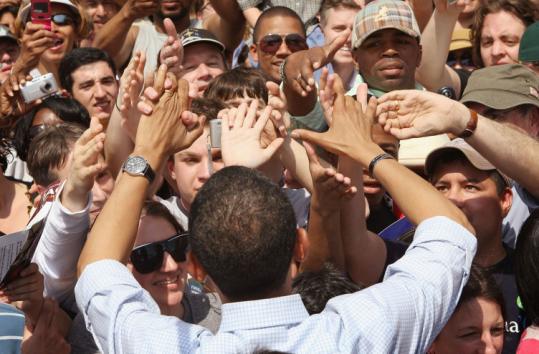 PHILADELPHIA - Despite wall-to-wall media coverage, inescapable TV ads, and impassioned pleas from friends and family, thousands of Pennsylvania voters still cannot make up their minds about whom to support in Tuesday's Democratic primary.

Unmoved by all the pressures and the candidates' nearly daily visits, they tell pollsters that, though they plan to vote, they are not quite ready to declare their choice, postponing their decision until the waning hours, or even until they're in the voting booth.

If the pattern of previous primaries and caucuses holds, the biggest procrastinators - those who make up their minds on Tuesday - will probably break for Senator Hillary Clinton. If they side with her again in Pennsylvania, it may help Clinton hold off Senator Barack Obama with a big-enough victory to save her candidacy, again.

In three polls conducted last week in Pennsylvania, which showed Clinton holding single-digit leads, 9 to 13 percent of voters said they were undecided.

Through 27 contests where exit polling on late deciders is available, Clinton has won those voters in 20. Combined, she has a median showing of 50 percent among voters who decided on the last day, compared with 43 percent for Obama. Such voters have, on average, made up about 13 percent of the Democratic electorate in each state, the exit polls show.

These voters have helped cement Clinton's crucial victories in Ohio and Texas on March 4, which kept her campaign afloat after 11 straight victories by Obama. And they may have made the difference in their closest contest, her narrow victory in New Mexico on Feb. 5.

Indeed, Clinton often has done better among late deciders than among all voters, at times drawing more of them even in primaries Obama won, including Connecticut, Delaware, Georgia, Illinois, and Maryland.

David E. Johnson, a Republican strategist who heads the polling firm Strategic Vision, said there has been a similar trend in many states: Clinton starts out with a large lead in polls; Obama, as he holds rallies and airs ads, closes the gap to the point where he looks positioned for a possible win; and then Clinton, buoyed by late-deciding voters, pulls out a larger-than-expected victory.

"Obama has not clinched the sale with them," Johnson said. "They're flirting with him, but then at the last minute, they go with someone they're more sure of."

Johnson said Clinton has helped this trend by targeting female voters in the closing hours before primary votes, as she is doing in Pennsylvania.

Clinton's campaign says undecided voters realize in the end that they trust the New York senator more to keep the country safe and turn the economy around.

"When people get into the polling place and think about who they really want in the Oval Office, they choose Hillary because they have confidence in her ability to run the economy and protect our national security," spokesman Phil Singer said in an e-mail.

Making a similar case Tuesday at a campaign stop in Easton, Pa., however, Bill Clinton overstated his wife's success among late- deciding voters.

The former president said that despite Obama's success in a slew of February contests, Hillary Clinton was "normally" winning voters - even by a "60-40" margin - who made up their minds at the end because they thought hard about who would be the "best president."

In fact, in the four contests between Super Tuesday on Feb. 5 and March 4 in which voters were asked when they had made up their minds - Louisiana, Maryland, Virginia, and Wisconsin - Clinton beat Obama among voters who decided on the last day only in Maryland, and she won them 48 percent to 41 percent.

Although Clinton tends to dominate among voters who decide on the final day, Obama does slightly better than Clinton among the approximately one-third of voters who make their pick during the full week before primaries and caucuses, a median of 49 percent to 47 percent.

At times, Obama has performed better in states among voters who decided in the last week than he did in those states overall - beating Clinton, for example, 38 percent to 35 percent among this group in New Hampshire, even though she won the primary there.

In a number of states, Obama has closed large gaps with Clinton in polls in the final weeks, including Texas, where she narrowly won the primary and Obama emerged with more delegates because he won separate caucuses.

Clinton appears to have helped herself by airing a TV ad in the last few days that implicitly questioned whether Obama would be prepared as president to handle a world crisis at 3 a.m.

"Our challenge is trying to compete with decades the Clintons have spent campaigning and getting to know the people of many of these states," Obama spokeswoman Jen Psaki said in an e-mail. "But the bad news for the Clinton campaign is that the more people get to know Barack Obama, the more they prefer him as the choice to face John McCain."

Psaki asserted that Obama "probably won't win Pennsylvania," but she said the time the Illinois senator has spent campaigning here has made for "important headway for the general election contest."

Paul Manuel, executive director of the New Hampshire Institute of Politics at St. Anselm College, said that many voters believe that Obama could bring huge change and has lots of potential, but are struggling with whether his relative inexperience makes him a riskier choice.

"You see that he could be a transformative figure in American politics," Manuel said. But he added that voters are wondering "is he electable" and would they prefer "the consistency and reliable hand of Hillary Clinton."