African-born voters in Pa. are drawn to Obama

Find echoes in his story 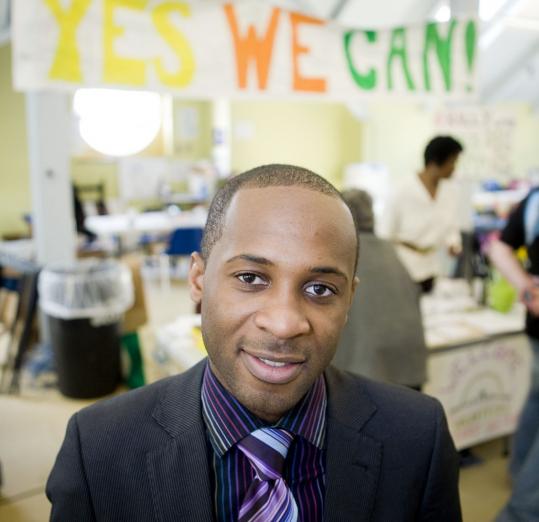 PHILADELPHIA - Until recently, the windows of a West African grocery store in Philadelphia advertised only one presidential candidate alongside a colorful selection of international phone cards: Amadou Toumani Touré, from his successful reelection campaign last year "for a winning Mali." Now Touré's fading portrait has company: a bold-blue sign for Barack Obama.

Inside the store the other day, Mali-born taxi driver Mohammed Camara wedged a chair between an aisle filled with sacks of cassava grain and a rack of West African hip-hop DVDs to watch CNN, which showed Obama delivering a speech 20 miles away in suburban Malvern. "Everyone from my country - they like Obama," Camara said, describing the opportunity for renewal that Obama, son of a Kenyan father and a Kansan mother, promises the continent where his grandmother still lives.

Obama's candidacy has mustered unusual interest from Africans who have settled in the United States over the last generation, including the nearly 50,000 estimated to reside in Pennsylvania. To many of them, Obama's immigrant journey is not the idiosyncratic one he describes in speeches and books, but a familiar tale of contemporary global life not unlike some of their own stories.

Camara, 45, who came to the United States 10 years ago and is now a citizen, was eagerly looking forward to voting for Obama in Tuesday's Pennsylvania primary, but not out of continental pride. In fact, Camara said he did not see Obama as African at all. "In my view, he's not a Kenyan because he's from here. His mother is American. Why tell people he's African?"

The success of Obama - a black man whose father came to the United States on a student visa instead of a slave ship; the son of an immigrant who wasn't tired nor hungry nor poor but yearned only for an advanced degree - is giving American form to an identity largely overlooked in a country where race is drawn along the color line and political battles over immigration on the southern border.

"Maybe if Obama becomes president, there would be a new story about African immigration people can tell, " said Timothy Burke, a Swarthmore College professor who specializes in African history.

Most Africans arrive in the United States through legal channels; those who do not come as refugees usually arrive on student visas.

"African immigrants are more likely than other foreign-born immigrants in the Philadelphia area to have college or graduate-level degrees," according to Amanda Bergson-Shilcock of the Welcoming Center for New Pennsylvanians, a nonprofit support center for immigrants.

Obama, who describes his life and worldviews as shaped not by a single place, but by the links among many of them, evokes a familiar cosmopolitan archetype from the postcolonial African diaspora.

Obama's father was a member of Kenya's Luo tribe who came to the United States to study at the University of Hawaii and went on to get a degree at Harvard as well. Barack Obama Sr. returned to his homeland after the birth of his son and became a government official.

"We identify with his travels," said Ibrahima Sanogo, an unemployed paralegal from the Ivory Coast living in suburban Bucks County. "Coming here on a student visa to pursue a career and starting a family here is something that a lot of us go through. A lot of us identify with the fact that we, too, have US-born children."

Obama has written about the dislocation he felt as a mixed-raced child in the United States with an absent father and siblings and half-siblings on four continents.

"I'm not particularly sensitive to where he came from," Herbert Ushewokunze VII, 33, who was born in Zimbabwe and raised in London before working in Philadelphia as an international-business consultant, said of Obama. "I identify with my heritage, but my sense of identity is very global."

Indeed, the T-shirts sold by the Mauritanian vendors off 52d Street in West Philadelphia that trumpet Obama as "The People's President" define that title in the most worldly way. An image of a pensive Obama is surrounded by not only the Nigerian and South African flags, but by Israeli, Brazilian, and South Korean flags as well.

"People who live in Africa look at it as a savior coming to help Africa," said Michael Asiedu, an accountant who lent Obama one of his Northeast Philadelphia offices for use as a field headquarters and recruited most of his approximately 60 fellow Ghanaian clients to support the campaign.

Many Africans supporting Obama said that immigration policy was a top concern and that they saw Obama as not only an ally on the issue, but also as an inspiration to them.

"He's basically what people call the immigrant dream," said Yannick Ebibie, 26, who has translated Obama's literature for Pennsylvania's Francophone immigrant community and intends to one day return to his native Gabon to pursue a political career there. "For Barack Obama to be a candidate - maybe one of my sons can be president of the United States, too. That's pretty incredible for many of the immigrants."

Despite an unprecedented level of interest in the campaign, African immigrants are unlikely to leave much of an electoral mark on next week's vote: Pennsylvania has far fewer African-born residents than it has residents from Latin America, Asia, and Europe, and only about half are eligible to vote as naturalized citizens.

Although that population is split among numerous nationalities, ethnicities, and religions, those familiar with Pennsylvania's African community say that the specifics of Obama's heritage - that he is Luo, Kenyan, and the son of a father who converted to Islam - are rarely part of the conversation about him.

"The father's religious background is not discussed with much significance," said Mohammed Jomandy, a former Liberian diplomat and government minister who heads the African Islamic Community Center in Philadelphia. For Africans who have felt left out of the two-tone nature of American racial politics, Obama offers a perspective with which they can identify.

"Now I start to understand some priorities of African-Americans - only now," said Sanogo, 4, adding that Obama's March speech on race led him to talk openly about the subject with African-Americans for the first time.

"You now assume the best in people in a way you couldn't for the last eight years," said Sozi Tulante, 32, a lawyer at a Philadelphia firm who was born in Congo to Angolan parents. "It speaks well for the country that someone like Barack Obama is doing well."