Tough questions on gaffes throw both off message 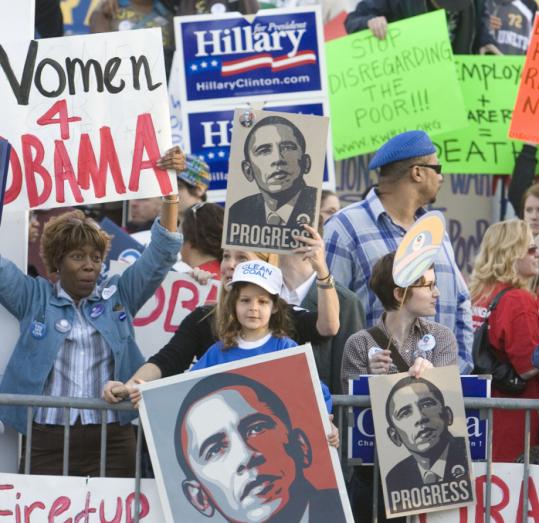 WASHINGTON - Barack Obama last night staked his presidential campaign on the idea that the American people will look beyond the inevitable gaffes and errors and character attacks of a 24-hour campaign cycle to meet the challenges of a "defining moment" in American history.

Hillary Clinton staked her campaign on the idea that Americans won't - and that her tougher, more strategic approach to countering Republican attacks is a better way for Democrats to reclaim the White House.

The first half of last night's debate in the august National Constitution Center in Philadelphia was a tawdry affair, as ABC news questioners called on Obama and Clinton to address a year's worth of dirty laundry, and each combatant eagerly grabbed at the chance to besmirch their rival a little more.

But while some in the audience groaned, the litany of nasty questions - about such matters as Obama's comments on the working class and Clinton's exaggerations about dangers she faced in Bosnia - helped to flesh out a long-simmering subtext to the Clinton-Obama battle: The Clinton campaign's insinuation that Obama is more vulnerable to GOP-style attacks on his patriotism.

For Obama, the harsh questioning by Charles Gibson and George Stephanopoulos of ABC News probably felt as though the media were trying to make up for a year's worth of allegedly ginger treatment all in one night. But it clarified the sharply different postures of the two campaigns.

On a range of matters - from his comments about the "bitter" working class, to his pastor's controversial statements, to why he doesn't wear flag pins, to his association with a former member of the Weather Underground - Obama was mostly unrepentant: Even as he sought to explain himself, he rarely missed a chance to call on Americans to take a higher path.

"If it's not this, it will be something else," he said when asked how he would respond if Republicans attacked him for angry statements by his former pastor, Rev. Jeremiah A. Wright Jr.

"Unless we can bridge some of these divides, we're not going to solve problems in this country," he said at another point.

Clinton wasn't so high-minded. At times, she seemed to revel in her tough-gal statements, sounding like a character in a 1940s film noir.

"I may be a lot of things, but I'm not dumb," she stated in response to a question about her exaggeration of the dangers she faced in Bosnia.

Later, she quipped, "I have a lot of baggage, and everyone has rummaged through it for years."

But the overall tone of the debate undermined the personas that both candidates were trying to present. Clinton wanted to show her tough skin, but she sometimes seemed a little mean, throwing gas on old Obama controversies with gratuitous statements such as her assertion that Obama had given "some kind of seal of approval" to Rev. Wright.

Obama, for his part, tried to resurrect some old Clinton controversies, including her famous 1992 complaint about not wanting to "stay home and bake cookies." He seemed eager to remind people that she could be condescending, too.

The tit-for-tat comment showed how off-message Obama was for most of the evening, able to conjure up little of the hopeful energy that has marked his campaign for much of the year.

In the second half of the debate, Clinton seemed confident in addressing a series of major issues, from Iraq to health care, always with a smile. Obama was able to regain his footing to some extent as he, too, returned to more comfortable ground, but he still seemed rattled by the pounding he had taken in the first half over the character attacks.

"The tone of what he's been saying has been down, a little on the negative side," said Donald F. Kettl, a political scientist at the University of Pennsylvania, near the end of the debate. "He has that great message of change, but that didn't come through tonight."

What did come through, however, was how crucial Obama's self-described "bet on the American people" will be to the future of his campaign.

Obama has said on countless occasions that he believes the American people want "an honest conversation" and not a campaign of charges and countercharges.

At last night's debate, some of the wounds were apparent. But he asked not so much for forgiveness, as for the right to move on.