Candidates are pushed to revisit their many missteps 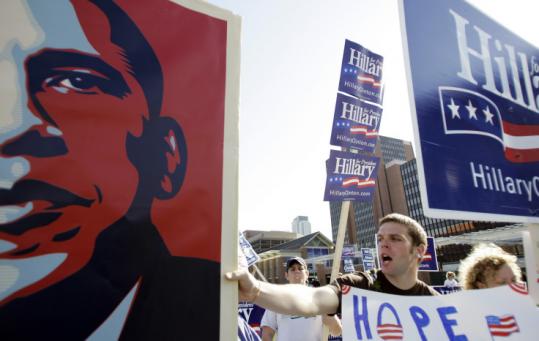 Those were the old Democratic debates - the pre-Super Tuesday, pre-war-of-attrition, pre-game-of-chicken debates. That was back when the biggest point of conflict had to do with the sketches on "Saturday Night Live."

So many real mistakes since then. So many gaffes. And such a relief for ABC's Charlie Gibson and George Stephanopoulos, who approached last night's Philadelphia debate with a mission: to make Hillary Clinton and Barack Obama answer for the sins of the past month or so. And to tap into the acrimony that has increasingly defined this primary campaign. The voice-over introduction was loaded with boxing metaphors, and the network dubbed this matchup "Obama vs. Clinton: One on One." Why not just give in and call this "The Thrillie in Philly?"

But while Obama and Clinton didn't seem especially warm toward each other - Clinton, watching Obama struggle, sometimes wore a tight little smile - this debate felt more like a tennis match than a bout in a boxing ring. Point lobbed. Point parried. Advantage, Obama. Advantage, Clinton.

In general, Clinton seemed to have an easier time. In part, as she often states herself, she has more experience with - and tolerance for - this particular type of game. In part, her recent high-profile mistakes seemed to invite less discussion than Obama's. There's no way to finesse the fact that you're caught in a lie, as Clinton was when she invented sniper fire on a 1990s trip to Bosnia. But her explanation was brightly delivered: "Unfortunately, on a few occasions I was not as accurate as I have been in the past." And she was allowed to move on.

Obama, by contrast, was crippled by what is actually one of his strengths: a willingness to forgo sound bite in favor of nuanced thought. His race speech, delivered nearly a month ago in the same convention center, proved that he could address a complex issue with thoughtful detail. But that was a long speech, not a minutelong response in a debate. There was no one to give a rebuttal.

Last night, there was Hillary Clinton, and she was ready to push back.

When Obama was asked about his statement that angry working-class voters "cling to guns or religion," he gave a lengthy answer that touched on Washington fatigue and the enduring prominence of wedge issues.

Clinton's response was more calculated and, in some ways, more cogent: "I don't believe that my grandfather or my father . . . cling to religion when Washington is not listening to them," she said. She said it was a "misunderstanding of the role of religion and faith."

This debate also made clear how much - a month after his race speech - the matter of the Rev. Jeremiah Wright continues to plague Obama. The senator's carefully constructed answers keep running him into traps. He said Americans shouldn't be distracted by "comments not made by me but somebody who is associated with me that I have disowned."

"You've disowned him?" Stephanopoulos chimed in.

Gibson and Stephanopoulous both seemed content to join the fray; bitterness makes for a fast-paced debate. When the subject finally turned to the issues, some 45 minutes in, Obama and Clinton were back to agreeing. For a time, it felt like an infomercial for the Democratic Party platform. And both candidates agreed vehemently that they want a Democrat to win.

The decision for Democrats this year has never been about parsing the issues. It has been about candidates slugging over who can connect best with voters. And last night, it became clear that Clinton has been studying Obama for tips. Her case for herself included a plea to "bring people together in a way that overcomes the anger, overcomes the divisiveness." She even put forth an Obama-esque line about having "a passion for empowering people."

And Obama proved he had some old-school politics in him. In a moment of frustration, he brought up a 16-year-old Clinton gaffe about baking cookies.

Even in matters of style, the candidates might not be so different, after all.