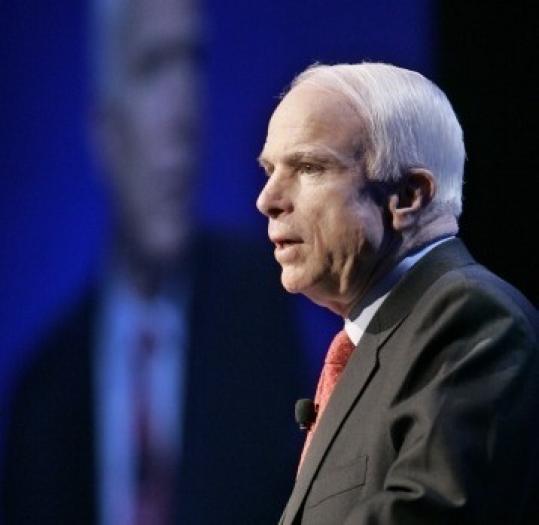 The presumptive Republican nominee coupled his announcement with a challenge to the media to acknowledge its errors "beyond the small print on a corrections page."

Appearing at the annual meeting of the Associated Press, McCain said his decision to support a reporters' shield law was a close call.

"It is, frankly, a license to do harm, perhaps serious harm. But it also is a license to do good; to disclose injustice and unlawfulness and inequities; and to encourage their swift correction," the Arizona senator said. "I know that the press that disclosed security secrets that should have remained so also revealed the disgrace of Abu Ghraib, a disgrace that made it much harder to protect the American people from harm."

At the same time, he said, "There will be times, I suspect, when I will wonder again if I should have supported this measure."

McCain also said he believes the economy is in a recession, a statement that Bush administration has declined to make.

Witness at fund-raiser's trial mentions Obama
CHICAGO - The government's star witness at the fraud trial of Antoin "Tony" Rezko testified yesterday that Senator Barack Obama and his wife attended a party four years ago at the home of the indicted political fund-raiser.

Stuart Levine said the party took place in April 2004 and was held to honor Iraqi-born Nadhmi Auchi, a London-based billionaire who was visiting the United States at the time.

Rezko, 52, was a major fund-raiser for Obama and Governor Rod Blagojevich, and the trial has been closely watched because of Obama's presidential campaign. But very little has been said about the senator thus far.

Neither Blagojevich nor Obama has been accused of wrongdoing. The Obama campaign has given to charity nearly $150,000 in contributions received by Obama's House and Senate campaigns that came from Rezko, his employees, his associates, and his family.

Davis told a Republican gathering Saturday in Kentucky, "That boy's finger does not need to be on the button."

Davis said yesterday it was "a poor choice of words" while discussing political and national security issues at an annual Republican dinner.

The quote had been widely reported on blogs and websites. Davis's campaign said it sent a letter of apology to Obama, who is seeking to become the country's first black president.

About 40 members of the Michigan and Florida Building and Construction Trade Councils and other unions wore signs and handed out leaflets. The union members, a core constituency of Democrats, did not prevent anyone from entering the party's offices.

The DNC stripped Florida and Michigan of their convention delegates, a total of 366, for holding primaries too early in the process in violation of party rules.

"To ignore just about 1 million votes I don't believe is something in our best interest," said Patrick "Shorty" Gleason, president of the Michigan construction union.

Hillary Clinton, who won both primaries, is also pushing hard for the delegates to be seated.