Is this a building worth saving?

Seattle board votes to block razing of 1960s-era Denny's 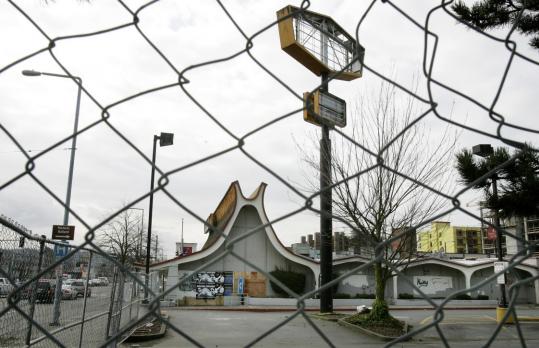 A boarded-up former Denny's restaurant has been designated as a landmark by Seattle's Landmarks Preservation Board, blocking construction of a condominium building on the site. (Associated Press)
Email|Print|Single Page| Text size – + By Gene Johnson Associated Press / March 21, 2008

SEATTLE - There's no question the graffiti-strewn, rain-rotted, boarded-up old is a landmark in the most basic sense: People refer to it when giving directions, as in, "Turn left at the Denny's."

But is the 44-year-old eyesore, with its swooping roof line, worthy of historical designation? Seattle's Landmarks Preservation Board thought so, saving the eatery from demolition and blocking construction of yet another condo complex.

The board's vote last month boggled many Seattleites, who consider the building tacky at best and don't buy the argument that it shares some architectural DNA with Seattle's most famous landmark, the Space Needle.

"They're saving something no one cares about," said Jed Lutge, who was walking near the building on the way to get a cup of coffee.

The developer that bought the property for $12.5 million in 2006 cried foul, noting that no one trumpeted the restaurant's historical value several years ago when it was going to be demolished for a monorail station.

The company, BCC Mikie Ballard, has appealed and promises a legal assault on Seattle's landmarks ordinance, prompting a philosophical debate over whether, in a cookie-cutter world of strip malls and big-box stores, something is worth saving just because it's different.

"We've heard the arguments before from people saying it's ugly, it's this, it's that," says Eugenia Woo, a preservation consultant who worked to save the Denny's. "We're not just looking at high-style buildings or buildings for the rich and famous as buildings that should be preserved. Seattle was a working-class city, and Ballard's history comes from that."

Though the Space Needle is a prime example, few people in Seattle had heard of "Googie" architecture, a subcategory of Modernism named for a Los Angeles coffee shop, before the Denny's debate. The style, popular for roadside attractions such as gas stations and drive-ins in the 1950s and early '60s, evokes "Jetsons" cartoons, characterized by soaring roof lines, boomerang-shaped elements, and bright colors.

The Denny's building was completed in 1964 at an intersection near downtown Ballard, then a blue-collar, Scandinavian enclave that has seen property values rise as boutiques, chic restaurants, and condos have moved in. It originally housed a local chain restaurant called Manning's Cafeteria; Denny's replaced it in 1983.

The architect, Clarence Mayhew, may have been influenced by a Polynesian-style information booth at the 1962 World's Fair in Seattle, where the Space Needle was unveiled. In its prime, the building featured a vaulted ceiling and "bubble lamps" by designer George Nelson.

Renovations have removed or masked those features, though.

The owners argue that the changes compromised the building's integrity, and note that it has no sprinkler system and isn't earthquake-proof. Also, landmark status wouldn't require them to restore the building, only to preserve it in its current boarded-up state, which no one wants.