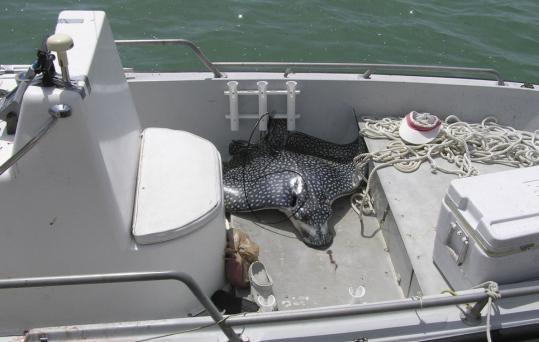 This spotted eagle stingray flew out of the water in the Florida Keys and struck a woman riding in the boat, knocking her over and likely killing her on contact, according to a state official. (Mark Coleman/Associated Press)
Email|Print|Single Page| Text size – + By Associated Press / March 21, 2008

MARATHON, Fla. - A 75-pound stingray killed a Michigan woman yesterday when it flew out of the water and struck her face as she rode in a boat in the Florida Keys, officials said.

Judy Kay Zagorski, of Pigeon, Mich., was sitting in the front seat of a boat going 25 miles per hour when the spotted eagle ray, with a wingspan of 5 to 6 feet, leaped out of the water, said Jorge Pino, spokesman for the Florida Fish and Wildlife Conservation Commission.

The 57-year-old woman's father was driving the boat on the Atlantic Ocean side of Vaca Key, Pino said.

"He had absolutely no warning," Pino said. "It just happened instantaneously."

The collision knocked Zagorski backward onto the floor of the boat, Pino said.

The impact likely killed the woman. She did not appear to have puncture wounds from the ray's barb, Pino said, adding that an autopsy is planned.

Zagorski's sister was standing next to her when the stingray appeared but was not injured, Pino said.

The stingray also died from the impact.

Spotted eagle stingrays can weigh 500 pounds and have a wingspan of up to 10 feet. They are known to occasionally jump out of the water but are not aggressive and use the venomous barb at the end of their tail for defense. The rays are protected in Florida waters and are typically seen swimming around on the water's surface.

"Rays jump to escape a predator, give birth, and shake off parasites," said Lynn Gear, supervisor of fishes and reptiles at Theater of the Sea in Islamorada.

"They do not attack people."