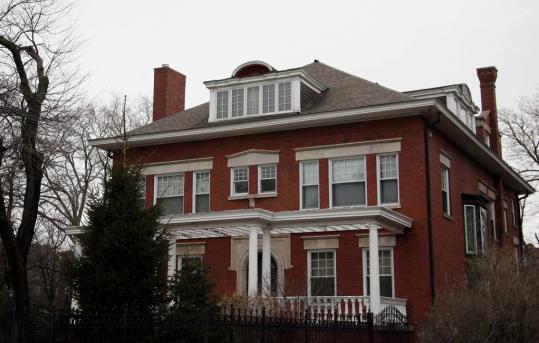 CHICAGO - The large brick house Barack and Michelle Obama bought in June 2005 sits in a neighborhood of historic mansions.

It was a fitting home for a new senator. And it was a good deal. The list price was $1.95 million, but the Obamas paid $1.65 million, the same price the sellers had paid five years before.

Now, as Obama fights for the Democratic presidential nomination, the deal is under scrutiny because of the help he received from a longtime friend and fund-raiser, Chicago developer Tony Rezko, who is currently on trial on federal charges that he attempted to profit from his relationship with another Chicago politician he befriended and supported, Illinois Governor Rod Blagojevich.

On Friday, Obama cast the home deal in an even sharper light by revealing that Rezko had raised up to $250,000 for his campaigns over the years - about $100,000 more than he had previously acknowledged.

Many Obama supporters say the candidate is being tarnished unfairly for his association with a man indicted for unrelated acts. Critics, however, say Obama showed questionable judgment by accepting a favor from a man under federal investigation so that he could purchase a dream house.

The issue has become a sore spot for Obama, some political analysts say, because he has raised public expectations by cultivating a reputation as an unusually clean politician.

"He's brought this on himself by the nature of his campaign," said Donald Kettl, a political scientist at the University of Pennsylvania. "The very fact that the question gets raised, 'Did Obama benefit from this personal relationship?' that's a problem for him, that's a kind of Achilles heel for anybody trying to make a campaign on the basis of integrity and leadership."

At the time they were looking at the house, the Obamas felt they could not afford the $1.95 million list price, Barack Obama has said. They also could not afford to buy the side yard, a buildable lot in its own right, listed separately for an additional $625,000. And the seller had stipulated that both properties close on the same day.

Obama called Rezko for advice. The men toured the property, and on the day the Obamas bought the house, Rezko's wife Rita bought the side yard. The Obamas negotiated a discount of $300,000. Rita Rezko paid full price.

Rita Rezko, Tony Rezko's lawyer, and the Obama campaign did not return calls for comment. Obama has said that his dealings with the Rezkos were ethical, but that he regrets the appearance created.

Friendship is formed
Rezko had cultivated a relationship with Obama beginning in about 1990, when he offered the new Harvard Law School graduate a job with his company, Rezmar Corp., which developed government-subsidized housing. Obama instead joined a law firm that often worked on Rezmar projects.

Rezko, a Syrian immigrant, and his partner Daniel Mahru, a Jewish businessman, worked in mostly black neighborhoods on Chicago's South Side. Obama, who had organized South Side tenants, may have seemed an ideal representative for the company, which relied on government support.

Rezko also had a knack for befriending politicians before they blossomed. A former Rezko employee, speaking on condition of anonymity, remembers meeting Obama around that time. "Tony was taking him around the office, introducing him and saying, 'He's going to do great things.' "

Obama wrote a letter in 1998 supporting a bid by a group including Rezko to secure public funding for a housing project. In 2004, he stopped by a dinner hosted by Rezko and shook hands with potential investors. Obama's representatives have said both instances were simply examples of a politician doing his job.

Several people familiar with Rezko's business, while not citing Obama specifically, said Rezko had relied upon his political relationships in winning government subsidies.

"He had little or no experience in housing, so why else they would have given him contracts is beyond me," said John Bartlett, executive director of the Metropolitan Tenants Organization, a Chicago tenant-advocacy group that has criticized Rezmar's subsidized-housing record.

From condo to house
During Obama's eight years as an Illinois state senator, the Obamas lived in a condominium they bought in 1993 for $277,500.

The decision to buy a house reflected newfound wealth. Barack Obama's salary as a US senator was $154,047, up from about $90,000 the previous year. His wife was promoted as an administrator at the University of Chicago Hospitals. She made $317,000 in 2005, up from $122,000. And royalties from sales of Barack Obama's first book and a deal to write three more netted about $1.2 million.

They found a home in Kenwood, a district of mansions built by Chicago merchants after the Great Fire, and now popular with wealthy black families.

Median home prices in Chicago increased about 50 percent between 2000 and 2005. Kenwood was no exception. Donna Schwan of MetroPro Realty, who listed the Obama house, believed it was worth $1.95 million.

But Schwan said the small pool of buyers for high-priced homes yields unpredictable results. And in this case, the sellers wanted to find a buyer as soon as possible, but didn't want to close until June.

The contracts with the Obamas and Rezko were signed in January. Schwan said it is her recollection that the Obamas may not have made the highest bid, and that other bidders may have matched Rezko's bid, but that the willingness of both to close in June was decisive. She has not kept records of the other bids.

The sellers did not respond to requests for comment.

'A mistake on my part'
By the time the deal closed, Tony Rezko's name was appearing in Chicago newspapers. He was linked to a federal corruption investigation. And he was reported to hold a city contract reserved for a minority-owned business. Chicago revoked the license of an O'Hare Airport food vendor after determining that the company was controlled by Rezko, who didn't qualify as a minority.

Rezko and Obama remained in touch. One month after the home sale, Obama gave the son of a Rezko associate an internship in his Washington office.

Then the Obamas asked to buy a piece of the Rezko property.

An independent appraisal completed in November 2005 judged the entire parcel was worth about $500,000 - $125,000 less than Rita Rezko paid for it. The Obamas wanted to buy about a sixth of the land to create a yard along the side of the house. The appraisal judged the strip was worth only $40,500 because it wasn't buildable. In January 2006, the Obamas cautiously paid $104,500, a proportionate share of what Rezko had paid.

"I misgauged the appearance presented by my purchase," Obama told the Chicago Sun-Times in November 2006. "For that reason, I consider this a mistake on my part, and I regret it."

The Obamas also worked with the Rezkos to build a fence between the properties. The Obamas spent a few thousand dollars on a lawyer and an architect. The Rezkos paid $14,400 for the fence, which included a gate that gave the Obamas continued access to the vacant lot. Barack Obama has said the family never used the land. But the Obamas' groundskeeper regularly used the gate to mow and care for the lot. Obama told the Sun-Times he meant to send Rezko a bill.

In October 2006, Tony Rezko was indicted on corruption charges unrelated to Obama. In December, Rita Rezko sold the remainder of the lot for $575,000 to Michael Sreenan, a lawyer who worked for Rezmar. She made a 9 percent profit in less than two years. Sreenan, in turn, has put the parcel back on the market for $995,000. He says he believes the value of the parcel has increased significantly because of the growing fame of the family next door.