McCain brother stays out of spotlight

But writing makes impact on Internet 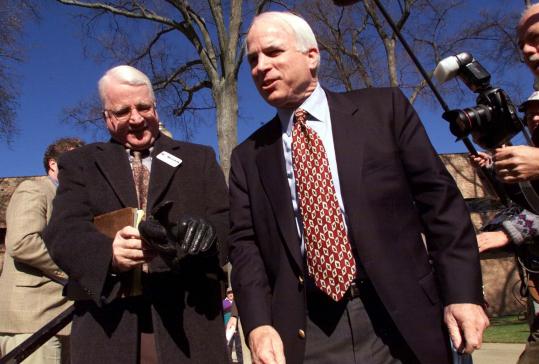 Senator John McCain (right) campaigned with his brother, Joe, at a Town Hall meeting in Greenville, S.C., in January 2000. Although he is not campaigning this year, Joe McCain's writing on anti-Semitism has been widely distributed on the Internet. (Monica Almeida/The New York Times/File 2000)
Email|Print| Text size – + By Michael Kranish Globe Staff / March 7, 2008

WASHINGTON - Joe McCain emerges from a Washington subway station looking quite like his famous brother, sporting a shock of white hair tucked beneath a cap emblazoned with the John McCain campaign logo.

But sometimes Joe McCain wishes his name was anything but McCain. "I'm very proud of him," he said of his brother, the presumptive Republican presidential nominee. "But having a last name of McCain can be tough."

This year, unlike his frequent appearances on the campaign trail in 2000, Joe McCain has not spent a single day on the stump. He worries that he might say something that will cause his brother a problem, and he doesn't want to violate his mantra: "Do no harm."

Instead, the former newspaper reporter has made his mark with the written word, including an essay on anti-Semitism, widely distributed on the Internet, which he says may have made more of an impact than his past appearances on behalf of his brother.

"I stood in the center of Dachau for an entire day, about 15 years ago, trying to comprehend how this could have happened," he wrote in the essay, referring to the Nazi concentration camp outside Munich. "I soon became engulfed in the enormity of what had occurred there nestled in this middle- and working-class neighborhood."

The emotional essay has been picked up in recent months by myriad websites, sometimes with commentary asking whether John McCain's brother in fact wrote the essay, and why.

Joan Rosenfelt, who posted the essay on the Jewish outreach website, www.ikehillah.org, said she gets e-mails every day asking about it. "What the man says is wonderful," said Rosenfelt, although it hasn't turned her into a McCain supporter. She said she is a liberal Democrat supporting Hillary Clinton.

Joe McCain, an Episcopalian, said he sent the essay in e-mails to friends several years ago and didn't realize it would end up online. He says he wrote it because "I think personally probably the most abused and mistreated people are absolutely and without question the Jews."

He calls himself a strong supporter of Israel and said he worries that if the United States pulls out of Iraq precipitously Israel will be harmed, a comment that dovetails with his brother's admonition about the broad dangers of such a pullout. He insists that there is no political calculation involved and that it is not part of any organized effort to win over Jewish voters for his brother.

As voters seek to learn more about John McCain, 71, few people can provide a better perspective than his 65-year-old brother, although he is the first to say that it is a wholly admiring view. "He is my hero. I think John will be one of the most interesting and productive presidents in history, and possibly a great president," Joe McCain said.

But he said he is taking nothing for granted. He said he recently watched Democratic candidate Barack Obama on television and couldn't turn it off. "I was mesmerized by the guy's speech," he said, before stressing that his brother would be a better president, if not a better speaker.

Ever since Joe McCain can remember, he has tried to be like his brother. He never quite caught up.

He vividly remembers his then-14-year-old brother reading Emil Ludwig's biography of Napoleon Bonaparte, and tried without success to make it through the text as well. He followed his brother to the US Naval Academy, but lasted only a year. He followed his brother to Vietnam, but says he was mostly on a battleship and never was in the line of fire. He became a newspaper reporter in San Diego and acted in dinner theaters in Washington, learning an endless number of accents, which he intersperses throughout a conversation.

But the brothers, who have a sister, shared a defining experience: being the sons of Navy Admiral John S. McCain Jr. Joe McCain is researching what he hopes will turn out to be a biography of his father, just as his brother wrote "Faith of My Fathers."

The brothers seem equally obsessed with what drove their father and how he influenced their lives. The family lived in Cambridge for nine months in the late 1950s when their father was stationed at a nearby naval facility, while John McCain was at the Naval Academy. "We lived near Hah-vad Square," Joe McCain said, mimicking a Boston accent.

Joe McCain's view is that the family's peripatetic experience of constantly moving around the world has shaped his brother to this day. John McCain ceaselessly tried to introduce himself to new people in new surroundings, not so different from courting voters on the campaign trail, Joe McCain said.

Being heard at a dinner table that featured boisterous debates similarly was preparation for the political fray. Even John McCain's low-key religious background can be traced to their father, according to Joe McCain. While their father rarely went to church on Sunday, Joe McCain said, he could often be found in his study, kneeling in private prayer.

One thing that Joe McCain said he will not do is try to profit off his brother should he become president.

Some years ago, he said, he was offered a lucrative corporate deal, but realized that the only reason he was being wined and dined was because his last name was McCain. The experience saddened him and made him wary, and he said he has rebuffed such overtures ever since. He is something of a student of the long, sad history of presidential brothers who caused problems, from Billy Carter to Roger Clinton.