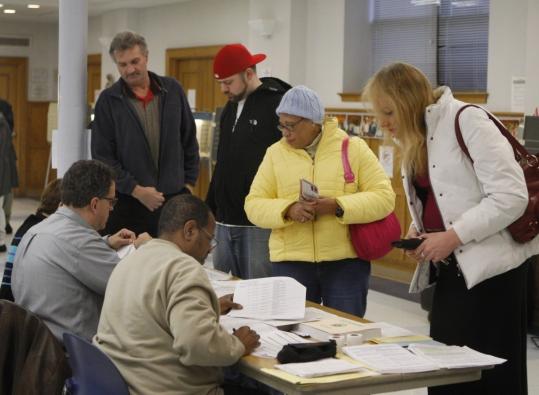 About 3.3 million Ohioans, including these in Cincinnati, cast ballots in Tuesday's primary, despite rain that later turned to sleet and ice. Some polls ran short on paper ballots. (Gary Landers/The Enquirer via associated press)
Email|Print| Text size – + March 6, 2008

COLUMBUS, Ohio - Despite an onslaught of rain and ice, a bogus bomb threat, and shortages of paper ballots that forced some polls to stay open late, Ohio voters set a record Tuesday for turnout in a primary.

Texas also set a turnout record Tuesday with more than 4.1 million voters, as people in both states were energized by a red-hot Democratic contest between Hillary Clinton and Barack Obama.

Roughly 3.3 million Ohioans cast ballots in the presidential primary that clinched the Republican nomination for John McCain and gave Clinton a crucial victory.

Results showed that the Clinton-Obama race drew the most voters in both states, with many unaffiliated and Republican voters choosing to vote on the Democratic side. In Ohio, Democratic candidates received more than twice the number of votes that Republicans did, with 2.2 million votes to Republicans' roughly 1.05 million. In Texas, about 2.8 million voters took part in the Democratic primary, compared with about 1.3 million in the GOP contest.

AFL-CIO now homing in on well-defined target
WASHINGTON - The AFL-CIO's leaders yesterday found a presidential candidate they can agree to focus on: John McCain.

The nation's largest labor federation announced at its executive council meeting in San Diego that it would continue to remain neutral in the Democratic race, but would begin training its political resources on McCain, the presumptive GOP nominee.

Political director Karen Ackerman said the opening salvo will be to link McCain to President Bush and what she described as McCain's antiworker record. "There are no jobs programs, his healthcare program is one that's based on individual health accounts and not in any way universal healthcare," she said. "So on every single measure on economic issues that working families care about, McCain really stands with the Bush administration policies."

The AFL-CIO and its 56 unions expect to spend an estimated $200 million on the 2008 presidential and congressional elections. The AFL-CIO eventually will endorse a Democrat for president, but neither Hillary Clinton nor Barack Obama yet has support from two-thirds of the union's 10 million members to win the labor federation's formal backing.

Rolling Stone finds 'New Hope' in Obama
WASHINGTON - Rolling Stone is backing Barack Obama for president, the first time the music magazine has endorsed a contender for the White House during the primary.

"The reason for the early choice is twofold," the editors explain in the publication's upcoming issue. "Undoing the damage of the disastrous Bush years will take a leader who can unite a deeply divided nation, and politicians with gifts like Obama's are so rare that it's imperative for each of us to do our part."

Jann Wenner, the magazine's editor and publisher, called Hillary Clinton a "capable and personable senator," but criticized the way she has run her campaign.

"Her campaign certainly proved her experience didn't count for much: She was a bad manager and a bad strategist who naturally and easily engaged in the politics of distraction, trivialization, and personal attack," Wenner wrote.

Obama appears on the magazine's cover next to the headline, "Barack Obama: A New Hope." In the image, his pose is like Superman's and an aura surrounds his frame.

Both Democrat Dennis Kucinich and Republican Ron Paul survived challenges for their congressional seats against opponents who argued that they were ignoring their constituents to seek the presidency.

Kucinich, who dropped out of the nomination race in January to focus on his House seat, bested four foes in his Cleveland district. He still faces a Republican in November to win reelection.

Paul, who focused on his House campaign in recent weeks, easily won his race in Texas and faces no Democratic opposition in November.

Rove's birthday note makes Clinton smile
Karl Rove has been like Darth Vader in the Democratic presidential race - as in, "That's an ad that Karl Rove would like," or "That's an attack from Karl Rove's playbook."

Rove is now an analyst for Fox News and while Clinton was being interviewed on "Fox & Friends" about her primary wins Tuesday, he handed a note to the host pointing out that more presidents have been born in October than any other month.

Clinton happily said that, yes, she was born in October. "Thank you, Karl," she said, a big grin on her face. "I mean, the omens are just stacking up. What can I say?"