To some, McCain's financial tangle ironic 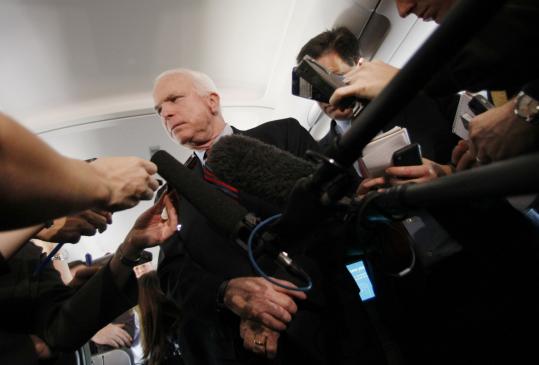 Senator John McCain of Arizona, on the trail in Texas yesterday, is the subject of a complaint filed with the Federal Election Commission by Democrats who seek to hold him to his pledge to accept campaign spending limits. (GERALD HERBERT/ASSOCIATED PRESS)
Email|Print|Single Page| Text size – + By Charlie Savage Globe Staff / February 29, 2008

WASHINGTON - Former Federal Election Commission chairman Bradley Smith, columnist George Will, and a host of other conservatives have spent years criticizing Senator John McCain's push for further rules on the nation's campaign-finance system. Now, McCain's critics on the right have new ammunition: the senator's own woes with the FEC.

"He wrote these laws, and one of the reasons I think people need to continue this discussion and this debate is, I think, one of the worst things that's ever happened to American politics is the McCain-Feingold campaign finance act," Huckabee said during a conference call with reporters. "It has created more problems than it has solved, and it may very well be that the law that he pushed comes back to bite him."

In fact, McCain has been ensnared by a public-financing law that dates to the Watergate era - not the extra rules he championed in 2001 banning use of unregulated "soft money" to influence elections. His ongoing battle to free himself from his 2007 commitment to take matching funds and abide by a spending cap, critics say, exemplifies the kind of regulations that they hate and that McCain has worked with Democrats to impose.

"There are a lot of ironies to this," said Smith, who repeatedly clashed with the Arizona senator over campaign-finance regulations. "McCain has been such a stickler for years in calling out everybody who does exactly what he has done - saying that they are corrupt, they are finding loopholes, making end runs around the law, that the FEC is not aggressively enforcing the law."

And Will, another influential critic of the McCain-Feingold law, wrote yesterday that McCain's predicament - including Democrats' contention that McCain is bound by his pledge - is justified punishment "for his argument that restricting spending does not restrict speech."

Brian Rogers, McCain spokesman, declined to comment yesterday on the criticism. But Rogers said everything McCain has done "is ethical, legal, and proper in using his constitutional right to opt out of public financing."

Last year, when his campaign was floundering and nearly broke, McCain applied for public financing. Candidates who opt into the system get portions of their privately raised donations matched with taxpayer dollars, but agree to abide by an overall campaign spending limit. This year, the cap for the presidential primaries is about $54 million.

But earlier this month, after he became the GOP front-runner and donations began pouring into his campaign, McCain decided to withdraw from the public financing system, even though he had not yet received any public money and his campaign has already spent nearly $50 million. Staying in the system would be crippling. His campaign would not be able to pay for ads, mailings, polls, or travel until September, when the primary campaign officially ends with the party convention.

Critics pounced on the announcement, saying it was too late for McCain to back out. And David Mason, the Republican chairman of the FEC, told the candidate that only the commission can decide whether McCain can be released from the federal funding system. But the commission is unable to vote because an impasse in Congress has left it with too few members for a quorum.

As a result, McCain is in a bind. His campaign says that he has a right to declare himself out of the system without an FEC ruling and that he will feel free to spend more than the cap allows in coming months. But the dispute has cast a cloud over the self-styled election-finance reformer.

Federal law makes it a felony punishable by a $25,000 fine and up to five years in prison if a candidate who opts into taking part in public financing spends more than the accompanying cap.

Legal specialists say it is highly unlikely that the Justice Department would prosecute McCain for exceeding the cap. But the issue has created a public relations headache for McCain. The Democratic National Committee kept up the pressure this week, filing an FEC complaint arguing that McCain must remain in the spending-cap system.

The McCain campaign dismissed the complaint, but some legal scholars say the issues are not as clear-cut as the Arizona senator says. Although his campaign has not received any government checks, McCain last year used his qualification for matching funds to automatically get on the primary ballots in Ohio and Delaware, instead of taking the time - and expense - of gathering signatures. And in December, when his campaign took out a $1 million bank loan, it cited its eligibility to apply for public matching funds as potential collateral.

Still, some election law specialists question whether McCain should be heavily penalized for his apparent strategic blunder in opting into the financing system at an earlier point in the campaign. They noted that McCain would still have to follow the basic clean-election rules when collecting private donations, including individual-donor limits and disclosure requirements.

"You don't want a sense that the choice of president is hamstrung by . . . rules that somehow stack the deck in favor of one candidate against another," said Ned Foley, a professor of election law at Ohio State University.

And McCain has already been hurt by his FEC problems in one respect, said Rick Hasen, an election law specialist at Loyola Law School in Los Angeles: He has lost leverage over Senator Barack Obama in a dispute over whether both campaigns will abide by spending limits should they reach the general election.

Last year McCain and Obama struck a deal:If they faced each other in the general election, they would both commit to the public financing system and its spending cap of about $85 million during the general election season. Since then, it has become clear that Obama could probably raise far more money if he stays out of the system, giving him a big advantage.

In recent weeks McCain has been pressuring Obama to abide by his earlier promise, but Obama has demurred.

"Once this FEC issue with McCain arose, I think he lost the moral high ground," Hasen said.

Smith, a Republican, said McCain's status as nominee-in-waiting has given conservative skeptics of campaign-finance regulations mixed feelings about his troubles with the campaign finance system. Still, Smith acknowledged some satisfaction at the appearance that their old foe may have been caught trying to "game the system."

"This certainly runs afoul of the broader McCain project and rhetoric," Smith said. "If the average person can't sort out the details here, that is classically the petard on which John McCain has hoisted others for years. 'Oh, it's got to be corruption if there is all this money [being donated].' . . . And now he will be the victim of that a little bit."

Correction: Because of a reporting error, a Page One story yesterday on the campaign finance system misstated the campaign-spending cap for any presidential candidate who accepts public financing for the general election. It is about $85 million.