For Ohio win, Clinton banks on the disaffected 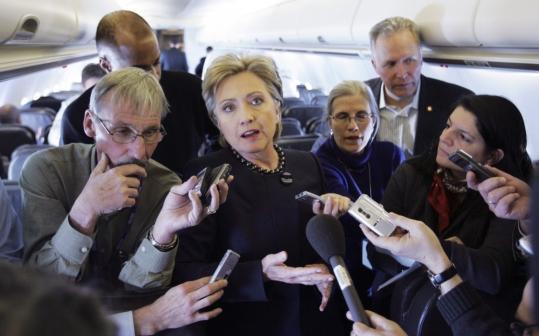 Senator Hillary Clinton spoke with reporters on her campaign plane en route to Ohio, where she convened an economic summit with Governor Ted Strickland and a host of other leaders. (CAROLYN KASTER/ASSOCIATED PRESS)
Email|Print| Text size – + By Scott Helman Globe Staff / February 28, 2008

ZANESVILLE, Ohio - James Zbinovec is 60 years old. His only income these days is unemployment, $139 each week.

Things used to be better. For 11 years, Zbinovec worked as an assembler at in Zanesville, making electrical parts for Detroit automakers. A week before Christmas, he was laid off. For a time, he earned the minimum wage making cardboard products. Now, nothing.

He has company: His wife, who worked at Lear for 17 years, and his sister, who worked there for 32, also lost their jobs at different points as American carmakers entered their sharp decline.

Zbinovec believes Senator Hillary Clinton, whom he came to see here yesterday at a satellite campus of Ohio University, is the Democrat who can turn things around.

Tales like Zbinovec's abound in Ohio, a state hit especially hard as the country's manufacturing base dried up over the past couple of decades. Residents tick off company after company that has shed jobs, moved overseas, or shut down altogether.

Clinton is banking on these disaffected voters to stand with her in Tuesday's Ohio primary, one she must win to remain competitive with Senator Barack Obama in the Democratic nomination race. She spent yesterday promising to be their advocate in the White House.

"It's time that we had a president who's going to be a fighter and a champion for our people again," Clinton said at an economic summit she convened here with Ohio's governor, Ted Strickland, and a host of other political and business leaders from across the country.

In contrast with her sharp words for Obama in other recent public appearances, Clinton offered little, and only implicit, criticism of him at the summit. Her goal was to demonstrate her mastery of the economy, economic development, and job creation, and to show her capacity for empathy. She said she would wake up every day in the White House and ask, "What are we going to do today to improve the lives of hard-working Americans?"

Clinton vowed to reinvest in manufacturing and reiterated her pledge to create 5 million jobs, and she cited Germany's public investments in solar power as a model.

"The government said, 'Look, we've got to help start the market for this,' " she said.

There was also a whiff of protectionism in the air as Clinton and the business and political leaders hashed out economic solutions and promoted her candidacy. Clinton vowed to "close every tax loophole that gives one penny of your tax dollars to any company that exports jobs." At least two of the panelists said it was critical that people buy products made in the United States.

"If we cannot buy American, fix America first, there's something wrong," said Gary Dwyer, secretary-treasurer for the Ohio State Building and Construction Trades Council. To which Clinton replied, "You're absolutely right - we have to create a new ethic."

Two of the featured speakers were a couple from Dayton, Robert Landry and Beth Dlabay, who had lost their home to foreclosure on Christmas Eve. "The bottom drops out of your whole life," Landry said, and Strickland leaned over and gave him a hug.

Clinton acknowledged the economic challenges facing Ohio, but she also sounded, as any presidential candidate would, a bullish note about America's prospects.

"At the end of the day we have to decide what kind of future we want. It doesn't happen by coincidence," she said. "It's our chance now to seize the 21st century."