THIS STORY HAS BEEN FORMATTED FOR EASY PRINTING
Campaign notebook 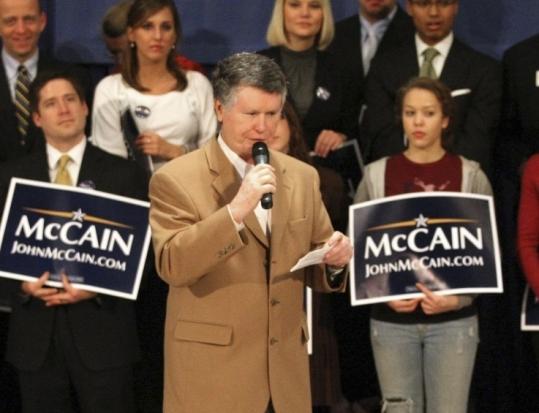 CLEVELAND - Senator Christopher Dodd endorsed one-time presidential rival Barack Obama yesterday and said it is time for Democrats to join forces to defeat the Republicans in the fall campaign.

"I don't want a campaign that is divisive here, and there's a danger in that," Dodd said, although he denied he was nudging Senator Hillary Clinton to end her candidacy.

Dodd said Obama is "ready to be president, and I am ready to support him in this campaign."

The two men appeared at a news conference.

He said Obama "has been poked and prodded, analyzed and criticized, called too green, too trusting and for all of that has already won" more than half the states and millions of votes.

Dodd said that he wasn't worried that the candidates would go too far in their pursuit of victory, but that their aides and supporters might. "We've witnessed a little bit of that" in recent days, he said.

That was an apparent reference to a photograph that shows Obama wearing a white turban and a wraparound white robe that was presented to him by elders in Wajir, in northeastern Kenya.

The gossip and news website The Drudge Report posted the photograph Monday and said it was being circulated by "Clinton staffers" and quoted an e-mail from an unidentified campaign aide. Drudge did not include proof of the e-mail in the report.

The Clinton campaign has said it did not sanction circulation of the photo.

Obama told reporters, "I don't think that photograph was circulated to enhance my candidacy, I think that's fair to say.

Hussein is Obama's middle name, but talk show host Bill Cunningham used it three times as he addressed the crowd before the likely Republican nominee's appearance.

McCain wasn't on stage or, he says, in the building when Cunningham made the comments, but he quickly distanced himself from the radio talk show host after finishing his speech. McCain spoke to a couple hundred people at Memorial Hall in Cincinnati.

"I apologize for it," McCain told reporters, addressing the issue before they had a chance to ask the Arizona senator about Cunningham's comments.

"I did not know about these remarks, but I take responsibility for them. I repudiate them," he said. "My entire campaign I have treated Senator Obama and Senator [Hillary] Clinton with respect. I will continue to do that throughout this campaign."

GOP front-runner beats both Democrats in poll
WASHINGTON - Despite Democrats' excitement over the presidential nomination battle between Barack Obama and Hillary Clinton, both candidates would lose to presumptive Republican nominee John McCain if the general election were held today, a new Los Angeles Times/Bloomberg poll has found.

The findings underscored the dramatic challenges facing Democrats as they hope to retake the White House during a time of war, with voters giving McCain higher marks when it comes to experience, fighting terrorism, and Iraq.

Obama and Clinton have made ending the war a centerpiece of their campaigns. But in hypothetical matchups against either Democratic senator, about half of voters polled said McCain, a Vietnam veteran, was best able to deal with the war. More than a third of voters polled favored the Democratic candidates on that issue.

Overall, McCain would beat Clinton 46 percent to 40 percent and Obama 44 percent to 42 percent. His lead over Obama is within the poll's 3-point margin of error.