Risky strategy that doomed Reagan in '76 could boost Democrats 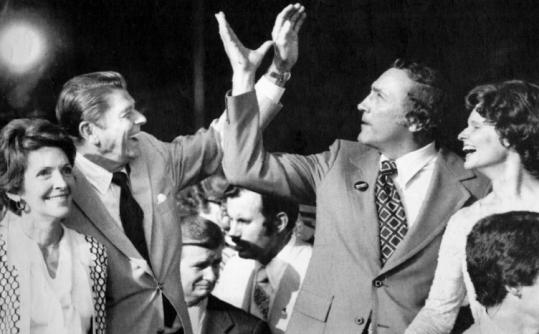 WASHINGTON - As the 1976 Republican National Convention approached, Ronald Reagan's campaign was facing almost certain demise. His rival, President Gerald Ford, seemed to have won over enough previously undecided delegates to be the nominee. Reagan had to shake things up, so he chose his running mate before securing the nomination.

Despite naming Senator Richard Schweiker of Pennsylvania the would-be vice president to shore up support among Republican moderates, Reagan lost the delegate race by a little more than 100. But picking a vice president while trailing in delegates was a bold technique that some political analysts think might repeat itself in this year's tight Democratic race, the first since the Reagan-Ford contest that could go down to the wire in the same way.

"It could be that a presidential candidate could in effect run with somebody and make it look like this is a winning ticket," said Jeffrey Bell, a 1976 Reagan campaign aide who was involved in "trying to sell" the Schweiker selection and now works for a Washington-based consulting firm.

In the 32 years since the Reagan-Ford campaign, no candidate has named a running mate before earning the party's nomination.

Senator Barack Obama of Illinois holds a narrow lead in delegates, with many of the party's superdelegates still undecided. Like Reagan in 1976, Senator Hillary Clinton of New York is trailing by just enough delegates to justify a possibly groundbreaking tactic, according to some analysts.

Selecting a popular vice presidential nominee could win over some superdelegates - uncommitted party leaders invited to the convention - while perhaps also attracting some voters in late primaries, analysts said.

"The element of surprise with that tactic is very important," said Paul Waldman, a political author and columnist for The American Prospect. "It would be a wise move for either Clinton or Obama to do."

But there would be significant drawbacks, many analysts pointed out. Schweiker, who is now retired and lives in northern Virginia, said the candidates may not want to consider such a move, because it blocks them from picking an ideal vice president: the primary runner-up.

"Unless they announce that they would support the losing candidate of the two for the vice presidency, I don't think it would help them," Schweiker said.

After a potentially divisive fight for the nomination, he said, the only way to unite the party might prove to be a combined ticket. Choosing a vice presidential candidate in advance would make such a move impossible.

"In order to unite the convention, I don't think that either of them can not take the other as their running mate," said Craig Shirley, a biographer of Reagan's 1976 campaign who is now president and CEO of a public affairs firm that aids conservative groups.

Nonetheless, an early designation of a running mate has helped candidates in gubernatorial races. In Maryland's 2006 race, then-Mayor Martin O'Malley of Baltimore picked Iraq war veteran Anthony Brown as his running mate nine months before the Democratic primary, and a year before the election. An African-American serving in the state's House of Delegates, Brown may have won over enough black voters to help the team defeat Republican incumbent Robert Ehrlich.

But if Clinton or Obama make a pick now, it could be seen as a desperate attempt to grab delegates, said Tom Schaller, a political science professor at the University of Maryland, Baltimore County. In the past, Schaller has argued that candidates would benefit from naming a vice president choice early - even before any votes are cast. In a June 2003 op-ed in The , Schaller pointed to many advantages in making an early vice presidential pick: It's twice as effective for campaigning, connections, and funds; it's creative and catches the eye of the media; and it's "presidential," appearing as a confident team.

But this year, facing a ticket of historic proportions - either the first woman or the first black candidate to vie for commander-in-chief - the hopefuls may want to be a bit more conventional in selecting a running mate, said Bill Bike, a senior vice president for a political consulting firm.

"Whoever gets the nomination will be groundbreaking. Maybe they ought to pick someone more traditional," like a white male, he said. Analysts said for Clinton, there's Evan Bayh, the Indiana senator and former governor of the state who endorsed Clinton early on. There's also Wesley Clark, the retired Army general from Arkansas who made a bid for the Democratic nomination in 2004 and endorsed Clinton in September 2007.

Both are from geographic regions that could be crucial for Clinton if she faces a general election against the presumptive GOP nominee John McCain, the senator from Arizona. Since naming a potential running mate before the convention may be targeted at specific states, picking Bayh could help Clinton win the Indiana primary on May 6.

Obama, analysts said, might look to Jim Webb, the junior Democratic senator from Virginia who in 2006 ousted Republican George Allen by less than one percent of the vote. Webb, a Republican until 2006, has ample military credentials from Vietnam and in many ways embodies Obama's critique of politics-as-usual.

The Illinois senator could also choose any Democratic governor from the West, Bike said, and have a geographical balance while gaining an executive appeal. And both contenders can consider John Edwards, the former North Carolina senator who dropped out of the race Jan. 30, or Governor Bill Richardson of New Mexico, who ended his White House bid Jan. 10.

Though Edwards did not help Senator John Kerry's 2004 presidential campaign win any Southern states, some analysts noted that his populist message in this year's primaries resonated with working-class families. Richardson, a Hispanic and former ambassador to the United Nations under President Bill Clinton, has one of the most extensive resumes of anyone to run for president.