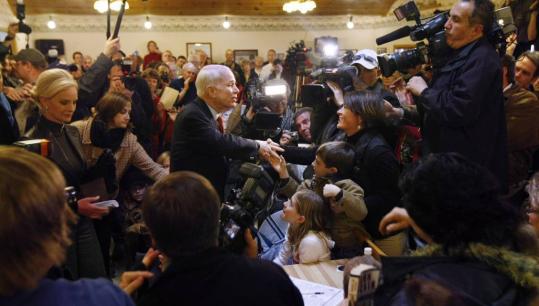 WASHINGTON - Aides to Senator John McCain confronted a female telecommunications lobbyist in late 1999 and asked her to distance herself from the senator during the presidential campaign he was about to launch, according to one of McCain's longest-serving political strategists.

John Weaver, who served as McCain's closest confidant until leaving his current campaign last year, said he met with Vicki Iseman at the Center Cafe in Union Station and urged her to stay away from McCain. Association with a lobbyist would undermine his image as an opponent of special interests, aides had concluded.

Members of the senator's small circle of advisers also confronted McCain directly, according to sources, warning him that his continued relationship with a lobbyist who had business before the powerful Commerce Committee he chaired threatened to derail his presidential ambitions.

The published a lengthy story on its website last night detailing McCain's ties to Iseman.

"It's a shame that the New York Times has chosen to smear John McCain like this," said Charles R. Black Jr., a top adviser to McCain's 2008 presidential campaign and the head of a Washington lobbying firm called BKSH & Associates. "Neither Senator McCain nor the campaign will dignify false rumors and gossip by responding to them. John McCain has never done favors for anyone, not lobbyists or any special interest. That's a clear 24-year record."

The McCain campaign put out a statement last night decrying "gutter politics" and saying the story - which had been reported on the Drudge Report website in December - was a "a hit and run smear campaign."

Iseman, 40, who joined the Arlington, Va.-based firm of Alcalde & Fay as a secretary and rose to partner within a few years, often touted her access to the chairman of the Senate Commerce Committee as she worked on behalf of clients such as , Echostar, Tribune Broadcasting, and , according to several other lobbyists who spoke on the condition of anonymity.

McCain, after his unsuccessful 2000 campaign, has emerged as the front-runner for the 2008 Republican presidential nomination. His reputation as a crusader for Washington reform - forged during almost 30 years in the Senate - is largely based on his stinging critiques of the role played by lobbyists. He routinely decries earmarks, or special pork projects inserted into legislation. He has said repeatedly that he has "never, ever" done a favor for anyone. It was this reputation that McCain's closest aides sought to protect.

"We were running a campaign about reforming Washington, and her showing up at events and saying she had close ties to McCain was harmful," said one aide.

The aide said the message to Iseman that day at Union Station in 1999 was clear: "She should get lost." The aide said Iseman stood up and left angrily.

Iseman could not be reached at her home or office last night. But in the Times story, Iseman wrote in an e-mail that, "I never discussed with him alleged things I had 'told people,' that had made their way 'back to' him." The Times reported that she said she never received special treatment from McCain or his office.

Three telecom lobbyists and a former McCain aide, all of whom spoke on the condition of anonymity, said Iseman spoke up regularly at meetings of telecom lobbyists in Washington, extolling her connections to McCain and his office. She would regularly volunteer at those meetings to be the point person for the telecom industry in dealing with McCain's office.

Concern about Iseman's presence around McCain at one point led to her being banned from his Senate office, according to sources close to McCain.

Iseman's biography on her lobbying firm's website notes, "She has extensive experience in telecommunications, representing corporations before the House and Senate Commerce Committees."

Her partners at Alcalde & Fay include L.A. "Skip" Bafalis, a former five-term Republican congressman from Florida, and Michael Brown, the son of former Commerce secretary Ronald Brown and a former Democratic candidate for mayor of Washington D.C.

Its client list is heavy with municipalities and local government entities, which suggests that its major emphasis is on the controversial business of winning narrowly targeted, or "earmarked," appropriations.

In the years that McCain chaired the Commerce Committee, Iseman lobbied for Lowell "Bud" Paxson, the head of what used to be Paxson Communications, now Ion Media Networks, and was involved in a successful lobbying campaign to persuade McCain and other members of Congress to send letters to the Federal Communications Commission on behalf of Paxson.

In late 1999, McCain wrote two letters to the FCC urging a vote on the sale to Paxson of a Pittsburgh television station. The sale had been highly contentious in Pittsburgh and involved a multipronged lobbying effort among the parties to the deal.