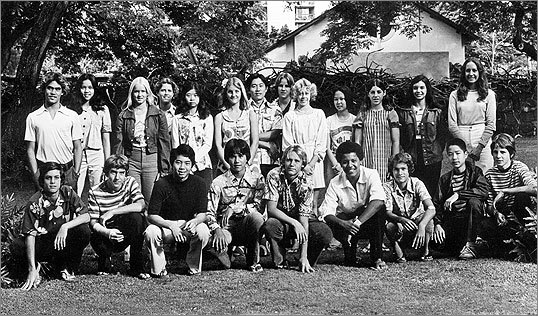 HONOLULU - In May, when his presidential campaign began organizing in Hawaii, Barack Obama declared the place of his birth "a fabulous model for the kind of America I hope this campaign will bring about."

Early yesterday, the "aloha spirit" that nurtured Obama during his childhood and remains the pride of this idyllic tropical island chain helped hand him one of his biggest victories yet as he swept Hillary Clinton 76 percent to 24 percent in the Democratic caucuses - and took him one step closer to achieving his goal of a new America.

A record 37,000 caucus-goers packed gymnasiums and stood in line for hours, nearly 10 times the number who turned out in 2004.

Obama, 46, who lived 14 of his first 18 years here, is seen by many of his fellow Hawaiians as the embodiment of their ancient creed of friendly acceptance and unity that has also become a central theme of his historic bid for the Democratic nomination.

Hawaiians boast that they have no ethnic majority. And many of them believe the state's numerous nationalities and ethnicities - including native islanders, Chinese, Filipinos, Japanese, and whites such as Obama's mother, who came here from Kansas, and Africans like his father, who came from Kenya - played a crucial role in shaping Obama's unifying message.

Still, some caution that the aloha spirit may not translate to support in the large parts of America with a far different history than Hawaii and with less diversity.

It's striking, she said, that the "first black candidate with a serious chance of winning the presidency is not from the large urban areas or grew up in the South."

While Obama is winning the vast majority of African-American voters, he has not made as many inroads with Asian-Americans and Latinos in some primary and caucus states. And this week, Democratic rival Hillary Clinton and Republican front-runner John McCain have both questioned whether his inspiring, inclusive rhetoric has any substance behind it.

But many who knew him during his childhood and have lived here for decades say Hawaii - highly isolated but also highly diverse - best explains the origins of Obama's vision of breaking down barriers and fashioning a new majority out of the nation's splintered political landscape.

"You learn quickly here that to get along you have to be sensitive to each other's feelings," said Bill Fay, 63, a retired programmer who came here from Chicago 40 years ago and was celebrating at the Obama campaign's victory party at the E&O Trading Company restaurant Tuesday night. "You learn that your point of view is not the only point of view. You have to listen to people who are not like you."

"If this Obama thing was going to come from anywhere I am not surprised it came from Hawaii," Fay added as Hawaiians young and old gathered to sing "Happy Birthday" to Obama's state coordinator, Andy Winer, basking in the glow of the Illinois senator's sweeping victory that guaranteed Obama most of Hawaii's 20 pledged delegates.

Charlene Cuaresma, 55, who was at the party with her 80-year-old father, Alberto - who came here from the Philippines in 1947 - could barely contain her excitement that the unifying message of Hawaii and its native son appeared to be capturing the hearts and minds of millions of Americans on the mainland.

"He embodies that aloha spirit," she said, standing behind a picture of Obama wearing a traditional Hawaiian shirt with a lei around his neck.

"He will take the aloha spirit to the rest of America, and people from many different ethnic groups can come together and work together for the common good."

Obama has been away for most of his adult life, but he remains closely linked to his birthplace. His frail maternal grandmother, Madelyn Dunham, who is in her 80s, still lives here. One Obama volunteer got a surprise last week when she dialed a phone number on her call list and Dunham answered.

"Honey, you don't have to convince me," Dunham replied when the volunteer began reading her support-Obama script. "Barack Obama is my grandson."

Obama's half sister, Maya Soetoro-Ng, the daughter of his Indonesian stepfather, is a Honolulu teacher and served as his chief surrogate in the days leading up to the caucuses, hopping from island to island to encourage Democrats.

It was here during a Christmas visit in 2006 that Obama decided to run for president.

Obama's campaign played up on his local ties ahead of the caucuses, airing ads playing up his Hawaii background. A widely circulated editorial cartoon that appeared in a local newspaper, The Honolulu Advertiser, showed Obama with outstretched arms and was titled "roots."

Despite Obama's roots, the Clinton campaign had still hoped to have a strong showing, dispatching daughter Chelsea to campaign last weekend and enlisting the help of the state's powerful senior US senator, Daniel Inouye, who returned for the caucuses for the first time in 40 years.

But the outpouring from Hawaiians of all walks of life proved to be a tidal wave, surprising even some longtime political watchers.

Jane Bond, a Democratic Party official who started "Kauai for Obama" on the northernmost island in the Hawaiian chain, could not recall any other political contest here that has energized voters like the 2008 presidential nominating process.

"I have 20-year-olds calling up saying we haven't voted before," Bond said in an interview on the eve of the caucuses. "People are involved who were totally disinterested before."

Inouye, who was awarded the Medal of Honor in World War II and who is referred to by many in the political establishment here as "Zeus" for his influence, acknowledged in an interview after the caucus that Obama's message of change through unity resonated with many Hawaiians.

While he expected Clinton to lose, he said, he did not think the margin would be so great.

Pacing quietly outside state Democratic Party headquarters Tuesday night, Inouye said the last time he had seen Hawaiians so energized was during the state's first congressional election after being admitted to the union in 1959.

"I had to wait in line for an hour and forty-five minutes," he said. "At one of the caucuses I attended people couldn't get in."

Inouye said that the aloha spirit is explained in part by the fact that Hawaii, 6,000 miles west of Washington, D.C., is insular in nature, forcing people from all backgrounds to try to live in harmony.

"There is a border called the ocean," he said. "You can't move to the suburbs and live in a mansion. You find it necessary to live with each other."

One consequence, he said, is that Hawaii has the highest rate of intermarriage between races - of which Obama is a product - and the lowest divorce rate in the country with the exception of Utah.

"The aloha spirit is real," said Kathy E. Ferguson, a professor of political theory at the University of Hawaii at Manoa who, drawn by Obama's message, participated for the first time in a presidential caucus on Tuesday.

Many Obama supporters believe that message will continue to define his presidential fortunes.

"Our diversity defines us rather than divides us," said US Representative Neil Abercrombie, who knew little "Barry" as a boy and was close friends with both of Obama's parents, who are deceased.

"And that is what this campaign is all about."