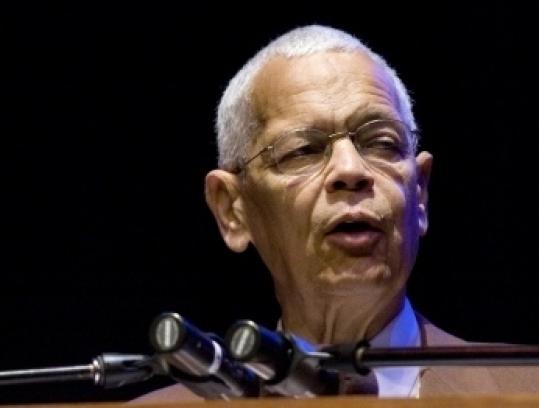 ALBANY, N.Y. - Two elected Hispanic leaders in New York said they would be distressed if Hillary Clinton's Hispanic campaign manager was replaced because of a string of losses when others, including former president Bill Clinton, should shoulder the blame.

Patti Solis Doyle stepped down Sunday after Clinton lost five Democratic contests over the weekend to Barack Obama. Clinton has said Doyle's decision was personal, not about job performance.

In a letter to Clinton dated Monday and obtained by the Associated Press, State Senator Ruben Diaz Jr. of the Bronx and Assemblyman Jose Peralta of Queens, both Democrats, say they are inclined to believe the explanation, but would be very troubled if they discover Solis Doyle was pressured to resign.

"She might be playing with fire with the Hispanic community," Diaz said yesterday. "I just wanted them to know that we are not innocent, to believe that the person resigned on her own. No one resigns when things are going good."

The Clinton campaign provided Solis Doyle for a response.

"This is my decision, my choice, my timing," she said. "I was really, really proud to be the first Hispanic woman to run a presidential campaign and particularly proud of the way Hispanics turned out and they turned out for Hillary."

"There was no pressure," Solis Doyle added. "And while I'm sad not to have the role, I am so happy to be able to be home more with my kids."

Governor says race may hurt Obama in Pa.
HARRISBURG, Pa. - Governor Ed Rendell, one of Hillary Clinton's most visible supporters, said some white Pennsylvanians are likely to vote against her rival, Barack Obama, because he is black.

"You've got conservative whites here, and I think there are some whites who are probably not ready to vote for an African-American candidate," Rendell told the editorial board of the Pittsburgh Post-Gazette in remarks that appeared in yesterday's edition.

Rendell cited his 2006 reelection campaign, in which he defeated Republican challenger Lynn Swann, the former Pittsburgh Steelers star, winning about 60 percent of the vote.

"I believe, looking at the returns in my election, that had Lynn Swann been the identical candidate that he was - well-spoken, charismatic, good-looking - but white instead of black, instead of winning by 22 points, I would have won by 17 or so," he said. "And that [attitude] exists. But on the other hand, that is counterbalanced by Obama's ability to bring new voters into the electoral pool."

Pennsylvania holds its primary April 22, and Clinton is heavily counting on winning it, after Ohio and Texas in March.

In a Feb. 8 letter to the DNC's chairman, Howard Dean, NAACP chairman Julian Bond expressed "great concern at the prospect that millions of voters in Michigan and Florida could ultimately have their votes completely discounted." Refusing to seat the states' delegations could remind voters of the "sordid history of racially discriminatory primaries," he said.

The DNC penalized Michigan and Florida for moving their primaries to earlier dates in violation of party rules. Both states were stripped of their delegates, and the party's presidential candidates signed a pledge not to campaign in either state. Florida lost 185 delegates, while Michigan lost 128.

Since then, facing the prospect of a drawn-out delegate battle with Barack Obama, Hillary Clinton, who won both the Michigan and Florida primaries, has pushed hard for both states' delegations to be seated.

In an interview, Bond said the NAACP had taken no position in the race between Clinton and Obama and would not endorse either candidate.

The DNC has said it would allow both states to hold a different contest, probably a caucus, that would comply with party rules.