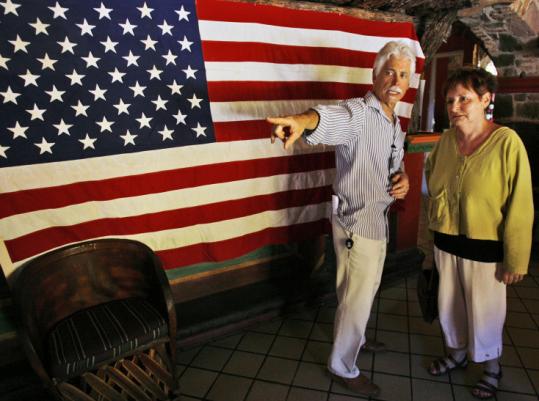 As Democrats went to the polls in 22 states last Tuesday, the party kicked off its first-ever "global primary," an eight-day event for members who live abroad.

Voters can participate by mail, fax, or the Internet at one of the Democrats Abroad centers set up in more than 30 countries. About 6 million US citizens living overseas are eligible to vote, but only about 1 million typically request absentee ballots from local election officials.

The lack of candidate appearances, television ads, and wall-to-wall cable TV coverage has hardly dampened foreign interest in the Democratic nomination battle, nor has it dulled the enthusiasm of expatriate supporters of Senators Barack Obama and Hillary Clinton.

Just seven pledged delegates are at stake. But in a tight contest, one American poet living in Prague could make all the difference.

Group pushes plan to skirt Electoral College system
If John R. Koza gets his way, American voters will never again have to wonder about the workings of the Electoral College and why it decides who sits in the White House.

Koza, chairman of National Popular Vote, is behind a push to have states circumvent the odd political math of the Electoral College and ensure that the presidency always goes to the winner of the popular vote.

Each state has a certain number of votes in the college based on the size of its congressional delegation. Often, all of a state's electoral votes are given to whoever wins that state's popular vote, even if the candidates are divided by just a single percentage point.

Under Koza's plan, states would promise to award their electoral votes to the candidate with the most support nationwide, regardless of who carries each particular state.

The proposal is aimed at preventing a repeat of the 2000 election, when Al Gore got the most votes nationwide but George W. Bush won a majority in the Electoral College.

Maryland and New Jersey have signed on to the plan. Legislation that would include Illinois is on the governor's desk. Dozens more states would have to join before the plan could take effect. The alternative is amending the Constitution, which takes approval by Congress and then ratification by 38 states.

Teachers' federation to run ads in support of Clinton
Remember a month ago when the airwaves and mailboxes of voters in Iowa and New Hampshire were loaded with appeals from a variety of "independent" groups advocating for one of the top-tier Democrats? Many of those outside organizations have fallen silent.

One group - the American Federation of Teachers - has persisted, announcing last week that it will fund radio ads supporting Senator Hillary Clinton in tomorrow's primaries in Virginia, Maryland, and the District of Columbia, as well as the Feb. 19 primary in Wisconsin. These will be the first ads sponsored by the teachers' group since the contests in Iowa, New Hampshire, and South Carolina.

The federation is spending more than $500,000 on the ads, according to financial reports filed with the Federal Election Commission.

That total included $200,000 for two weeks of radio spots running in advance of the Wisconsin vote, and a week's worth of radio in Virginia, Maryland, and D.C.

With no end in sight in the fight for the Democratic nomination, and with Senator Barack Obama holding a significant financial edge over Clinton, the continued spending by groups such as the federation may help Clinton level the playing field.