Las Vegas leaders are in a tizzy over multichapel brawls 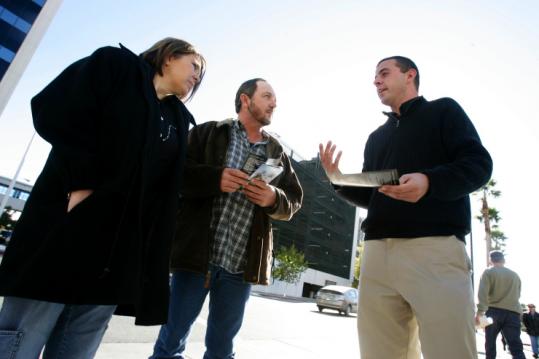 LAS VEGAS - Jed Matzke sets out each day to guide love-struck couples to happily ever after.

The first stop in Las Vegas for brides and grooms is the Clark County Marriage Bureau, at the corner of Clark and Third, down the street from a bail bondsman and the county jail. Matzke hangs out six days a week at the Pit, as some call the corner, smoking Marlboros, sucking Werther's candies, waiting for his shot.

It's been a slow afternoon, and half an hour has passed since the last pair of lovebirds. A casually dressed couple approaches the corner.

Matzke rushes the two, a flier in hand. His livelihood depends on the pair reading it and then committing to one of five weddings offered by Vegas Adventure Wedding Chapel, a short limo ride away.

As he starts to make his pitch, a half-dozen other men swarm the prospective bride and groom, shouting deals from different chapels. Larry Frias, 39, wraps his arm protectively around Neeve Gray, 46. "We've got your pamphlets!" he barks.

Gray flinches. "It's like [we] have french fries and all the sea gulls are fighting over them," she says, eyeing the men.

That's as apt a description as any of the Pit.

Las Vegas, which calls itself the Wedding Capital of the World, has more than 60 chapels where people can exchange vows - on gondolas, with an Elvis impersonator, aboard a pirate ship - almost any way they want. Competition for couples is fierce. In recent years, it has escalated to minor warfare, with the Pit the center of it all. Accusations have flown: slashed tires, death threats, homeless men paid to hassle competitors.

Many chapels advertise and take bookings online. But they also rely on a ragtag bunch of handbillers who stalk the lovelorn like paparazzi chasing stars.

The handbillers are a mix of miscreants and Las Vegans who want money badly enough to toil six days a week, from noon until the marriage bureau closes at midnight.

They endure triple-digit temperatures, rain, desert winds, and the occasional brawl. Last spring, a handbiller was accused of stabbing a competitor with a 2-inch buck knife - but said he was only defending himself because his rival had punched him in the face and scorched him with coffee in a quarrel over a customer. "I've never in my life seen anything so horrifying as I've seen in the last few years," said Charolette Richards, a nearly 50-year veteran of Las Vegas marriages and owner of the Little White Wedding Chapel. "People come to Las Vegas and get harassed by thieves, liars, and drug addicts."

The wedding industry is a mainstay of the Las Vegas economy, pumping an estimated $900 million a year into the region. So the chapel-on-chapel brawling has civic leaders in a tizzy.

"Somehow," the Las Vegas Sun wrote in an editorial, "love needs to be restored to an industry that thrives on it."

The city recently stripped the license of a chapel accused of thuggish tactics, including sending out handbillers who banged on car windows and badgered brides-to-be until they wept. Officials are discussing whether tougher regulations, including background checks for chapel workers, could keep wedding peddlers in check.

"People should be able to walk down the steps" of the marriage bureau, said City Attorney Brad Jerbic, "without getting a wedding deal shoved down their throats."

Recently, the half-dozen handbillers stand an arm's length apart, scouring the street for cabs and cars with out-of-state licenses.

"Usually anybody that's lost is looking for a marriage license," Matzke says.

He's ready. Three dozen Vegas Adventure Wedding Chapel fliers are tucked into his back pocket. The most expensive package, Chianti, promises a candle-lit ceremony, petal-strewed aisle, sparkling bubbly toast, bridal dressing room, lace garter, and a bouquet of nine roses - florist's choice of color - for $599. The cheapest, Amour, goes for $99 - five guests maximum, and the chapel loans a bouquet and a witness, if needed.

Carlos Arias, 52, who works for A Special Memory, wears slacks and a paisley tie. He warbles "Going to the Chapel" - off key - and flubs the lyrics. The men are paid about $10 an hour.