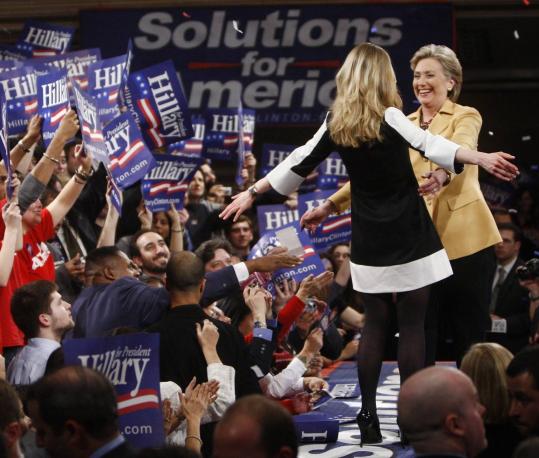 Chelsea Clinton was smiling at the crowd, but in a frozen way that suggested that she would rather be anywhere else on earth but the bitterly cold airplane hangar in Winterset, Iowa, where she had been pushed out into the presidential campaign as an antidote to Oprah Winfrey's appearance nearby that same day. The former first daughter, her arms braced stiffly at her side, didn't say a word.

Fewer than seven weeks later, on Jan. 24, a very different Chelsea Clinton led a lengthy question-and-answer session at Boston College. Unprompted, the 27-year-old took on the antiabortion protesters outside who held signs up to the cafe window. "I think someone is asking me to ask my mother to be prolife, so I think that's sort of a question," she said, before explaining that her mother wanted abortions to be "safe, legal, and rare."

Chelsea Clinton has emerged in a very short time as one of her mother's most important champions. The child whose privacy was so closely guarded for many years in the White House is now, it seems, a public figure.

Chelsea is touring college campuses across the country, including Bowdoin College in Maine, where she appeared last night in advance of tomorrow's caucus. She has called prominent Democrats who are superdelegates and even hosts of the talk show, "The View," to lobby for their vote. She tangled with Barack Obama supporters at a Nevada caucus site, and created a stir on Super Tuesday by bringing doughnuts and coffee to a Connecticut polling site that opened while she was still inside.

In the process, the public has gotten a glimpse of the sophisticated, polished, wonky, guarded, and sometimes glib grown-up child of Bill and Hillary. She easily summons the same detailed answers her mother gives to policy questions, and chats up voters with cute comeback lines and lots of exclamation points.

Her gradual emergence as a campaign figure seems to have been driven in part by her growing comfort with crowds, and in part by necessity as her mother has struggled to win the nomination. In many states, Obama has bested Clinton among young voters by large margins.

"It may not have been the role she was initially very comfortable with, but she has grown very fast into the role of spokesperson," said Peter Fenn, a veteran Democratic strategist who observed the young Clinton from a nearby seat at a recent debate in Los Angeles. "I've known a lot of kids of politicians. There are rebellious periods where they say, 'This is not fair to me,' but when you get older you see the complexities."

Chelsea Clinton has suddenly become such a presence that a reporter asked on an MSNBC political show Thursday night, "Doesn't it seem as if Chelsea is sort of being pimped out in some weird sort of way?"

That remark unleashed a torrent of criticism from the protective Clinton camp and its allies. The reporter was suspended and apologized last evening on air, but the campaign suggested the candidate might boycott the network by refusing to appear at a debate it is sponsoring later this month.

The Clintons have long tried to protect their daughter, even as she has been in the public eye since birth.

When she was born on Feb. 27, 1980, her father was already governor of Arkansas, though he lost his reelection bid that fall. In 1982, as Bill Clinton was fighting to win back the Governor's Mansion, Hillary Clinton greeted voters on the streets with Chelsea on her hip.

But once the family moved to the White House, Chelsea Clinton largely disappeared from view, although that didn't prevent sometimes hurtful media attention such as skits on "Saturday Night Live" that mocked her as an awkward adolescent with frizzy hair and braces.

Chelsea Clinton went to Stanford, studied at Oxford, and launched a business career while largely staying out of the media spotlight. She campaigned in New York when Hillary Clinton was running for US Senate in 2000, but only as the silent supporter, waving to the crowd but never taking the microphone.

As the presidential campaign ramped up last year, Chelsea Clinton was nowhere to be seen. As soon as she first appeared in early December, she became a ubiquitous, if reticent, presence, a breathing symbol of her mother's family values. With flowing blond hair, high heels, and subdued but fashionable clothes, she frequently sent middle-aged women into a photo-snaping frenzy.

At the end of December, she took a leave from her job at a New York hedge fund to campaign full-time at least through early March.

By then, Chelsea was easing into a more active role, shaking hands in New Hampshire coffee shops without either of her parents. After the New Hampshire primary, she began her college tour, and her more recent appearances have been trumpeted by press release. She has campaigned in 20 states so far.

"She's the only person in the world who can start a sentence about Hillary Clinton with, 'My mom,' and that unique perspective is what makes her such a compelling and effective voice," said Philippe Reines, a Clinton spokesman.

But she refuses to do any interviews, at one point drawing ridicule for turning away a 9--year-old reporter from Scholastic News who approached her in Iowa to ask if her father would be a good "first man." Reporters who try to speak to her on the trail - even with such questions as, "Are you having fun?" - are intercepted by vigilant aides.

Students say there is never a question to which Chelsea Clinton doesn't know the answer - her mother's answer. For example, the United States shouldn't borrow money from China to buy oil from the Saudis, she argues, or withdraw from Iraq without taking care of the American citizens there or Iraqi translators who have worked for the military.

Her own personality comes through more at informal moments with voters, although she seems to have a protective shell around her. Her comments tend to be a bit smooth, and markedly twenty-something.

Asked about her 88-year-old grandmother, Dorothy Rodham, Chelsea declared, "She's a rock star!" When a voter told her he loved watching her grow up, she responded, "I loved growing up."

When she crossed paths with Bill Richardson at a New Hampshire coffee shop, the New Mexico governor, who served in her father's administration, told her, "You're the best!" Without a beat, she answered, "I try!"

She has offered up a few crumbs of information about her own singular life. Her mother makes the best applesauce and still reads to her when she's sick, she told voters in Santa Barbara.

At a roundtable with young people on her mother's campaign bus in New Hampshire, she revealed that she went to math camp and "loved fractals when I was about 14."

She explained that she became a vegetarian at age 11 for health and ethical reasons, although she now eats fish.

"However," she said, "I think there was also some emergent rebelliousness."

The public may never know whether Chelsea Clinton relishes or loathes the thought of another stint as the daughter of the president. But one thing she did tell a campaign audience: She will never become a politician.