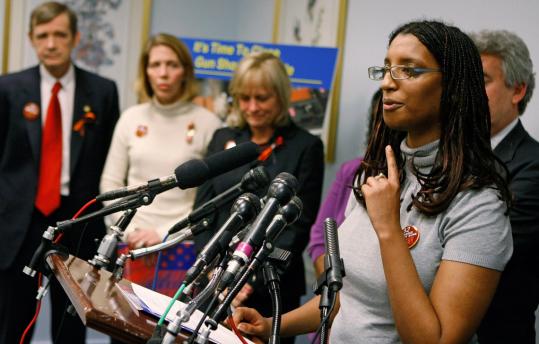 Elilta Habtu, a victim of the shooting at Virginia Tech, spoke Wednesday at a Capitol Hill news conference on the unveiling of legislation to close a loophole on firearms restrictions. (Mark Wilson/Getty Images)
Email|Print| Text size – + By Ben DuBose Los Angeles Times / February 2, 2008

WASHINGTON - Gun control advocates have largely been stymied in their efforts to get significant new firearms restrictions, but they still believe they can achieve one goal: closing a loophole that allows sales at gun shows without background checks on purchasers.

This week, two Senate Democrats introduced legislation to close that loophole in federal law despite a recent failure in Virginia, where a gunman massacred 32 students and teachers at Virginia Tech in April, to change a similar state law.

Accompanied by family members of some of the Virginia Tech victims, along with gun control advocate Paul Helmke of the Brady Campaign to Prevent Gun Violence, Senators Frank Lautenberg, Democrat of New Jersey, and Jack Reed, Democrat of Rhode Island, unveiled their proposal at a news conference Wednesday.

"It defies common sense that a loophole in federal law lets unlicensed dealers sell firearms at gun shows without running a background check on the buyer," said Lautenberg. "Our legislation would require background checks for every gun purchased at every gun show across America. Without this change in the law, felons, fugitives, and severely mentally ill people will continue to be able to buy guns - no questions asked."

Under current law, only federally licensed gun dealers, such as those at sporting goods retailers or gun shops, are required to make background checks. That doesn't cover informal situations, such as gun shows held on a field or in a facility rented for a weekend.

The senators pointed to the 1999 killings at Columbine High School outside Denver as an example. Three of the four weapons used that day were purchased at gun shows, and the young woman who bought them for the two shooters - because she was 18 and they were 17 - has said she would not have done so if a background check had been required.

Only weeks after the Columbine shooting, Lautenberg introduced a proposal to close the gun show loophole in federal law. It passed the Senate on Vice President Al Gore's tie-breaking vote but did not advance in the House.

This time, Lautenberg and Reed are using the Virginia Tech shootings to build their case, even though gunman Seung-Hui Cho bought his guns from a licensed dealer and underwent a background check. Mentally ill individuals are not permitted to buy firearms from licensed dealers; Cho had been ruled a danger to himself in a 2005 court commitment hearing, but Virginia never forwarded that finding to the national screening database.

Early last month, President Bush signed legislation to expand the federal database by requiring states to provide such information. Gun control advocates, however, argue that ensuring that the names are in the federal database means little, because someone on that list still can purchase firearms at a gun show without a background check.

Only 15 states require background checks for sales at gun shows. That is why federal law needs to be changed, according to Lautenberg and Reed.

"This legislation does not aim to prohibit people who are eligible to purchase a firearm," Reed said. "This legislation aims to stop firearm purchases by prohibited gun buyers such as convicted felons, fugitives, those found mentally incompetent, and juveniles, like those at Columbine High School. What we're about, starting today, is avoiding another situation where someone who is ineligible to buy a weapon does so at a gun show."

Between Columbine and Virginia Tech, the gun show loophole issue largely faded from the legislative agenda. Republicans frequently referred to it as compromising Second Amendment rights on the private sale of guns, while many Democrats attributed Gore's struggles in rural states in the 2000 election to his support for gun control and since then have backed away from gun issues for fear of a political backlash.

"It's simply a drive to make it impossible to have guns without being regulated by the government," said Larry Pratt, executive director of Gun Owners of America.