Democrats are mostly cordial in one-on-one 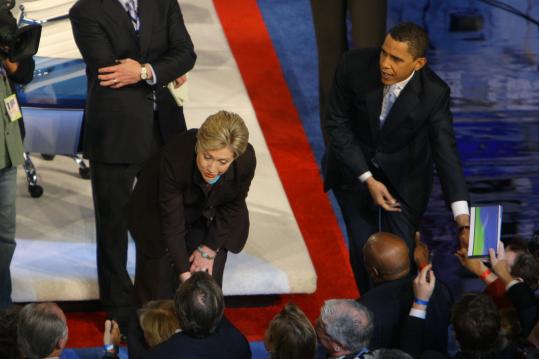 LOS ANGELES - Democratic Senator Hillary Clinton last night defended her 2002 vote to authorize force in Iraq as a "reasoned" decision at the time, while her primary opponent, Senator Barack Obama, said Clinton's vote raised questions about whether she has the judgment to lead the country.

In the last debate before Super Tuesday and the first two-person face-off since the campaign began more than a year ago, Iraq - long dormant as an issue in the Democratic race - returned to the forefront last night. Obama said his consistent antiwar stance would make him a stronger candidate against Senator John McCain of Arizona, the GOP front-runner. Clinton, meanwhile, portrayed herself as the contender with the experience and gravitas to confront a Republican opponent in the general election campaign.

"I've said many times that if I knew then what I know now, I would never have given President Bush the authority" to attack Iraq, Clinton said, declining to apologize for her vote. But there was "a credible case" for the resolution, Clinton said, adding that she did not expect Bush to invade Iraq in March 2003 without letting the weapons inspectors first finish their work.

Obama, an Illinois lawmaker who was not in the Senate when the vote was taken in October 2002, countered that "everybody, the day after the vote was taken, understood that this was a vote to go to war." While Clinton has "fairly" espoused her experience and ability to take charge from day one, he said, "it is important to be right on day one."

The debate represented an historic picture of a Democratic nominating contest that began with eight candidates and has come down to a woman and an African-American. Held at Hollywood's Kodak Theater, the event was attended by many entertainment luminaries who have sat in the same seats for the Academy Awards.

Democrats will vote in 22 states on Tuesday, and while it is not possible for either candidate to mathematically secure the nomination on that day, a strong showing by either could provide critical momentum toward becoming the Democratic nominee.

Saving most of their attacks for President Bush and the Republican candidates for president, the two Democratic senators struck a largely congenial tone, with Obama pledging to stay friends with his New York colleague after the campaign, and Clinton looking forward to the day when one of them would take the oath of office. Both seemed to be trying to appear presidential, with Obama talking in visionary tones and Clinton touting her experience and myriad plans to fix the nation's ills.

Asked whether either could imagine a "dream ticket" of the two of them, both candidates demurred - despite a rousing cheer of enthusiasm from the audience. "It's premature for either of us to start speculating on vice presidents," Obama said. Pressed further, he said, "I think Hillary would be on anybody's short list."

Clinton did not answer the question directly, saying she had "no doubt we will have a unified Democratic Party."

The two Democratic contenders sparred lightly on healthcare, foreign policy, and immigration. Clinton criticized Obama's healthcare plan, saying it would not cover all Americans, while Obama said the "mandates" in the New York senator's plan, requiring all people to buy health insurance, would not work without Draconian government-enforcement mechanisms.

On immigration, each accused the other of hedging a decision on whether to allow illegal immigrants to have driver's licenses.

Clinton "gave a number of different answers over the course of six weeks on this issue, and that did appear political," Obama said. Clinton said it was "inappropriate" to give driver's licenses to people here unlawfully, and said Obama, too, was "asked the same question and could not answer it" when the matter was first raised at a debate last year.

Tapping an issue important to Latino voters in California and several other Super Tuesday states, Obama also chided Clinton for not getting involved in the writing of an immigration reform bill - which ultimately failed - last year.

"Actually, I cosponsored comprehensive immigration reform in 2004 before Barack came to the Senate," Clinton shot back in one of several occasions in which she underscored her Senate seniority.

Both candidates slipped in references to former North Carolina senator John Edwards, praising him for his service and comparing Edwards's focus on poverty and healthcare to their own visions and plans. Both are hoping for an endorsement by Edwards, who dropped out of the race Wednesday after finishing third in early primaries.

And both candidates eagerly seized on opportunities to tweak Bush and other Republicans. Asked whether they each lacked the experience of running a business, Obama said the business experience of former Massachusetts governor Mitt Romney didn't appear to be helping him. "Mitt Romney hasn't gotten a very good return on his investment during this presidential campaign," Obama said, referring to the GOP candidate's heavy self-financing of his presidential bid.

And Clinton, asked whether voters should be given a choice that does not include a Bush or a Clinton - as has been the case since 1988 - turned the question against the sitting president.

In discussing Iraq, Clinton said the Democratic nominee would need to stand up to the likely Republican attack during the campaign. She said it was important "that our nominee be able to present both a reasoned argument against continuing our presence in Iraq and the necessary credentials and gravitas for commander in chief. That has to cross that threshold in the mind of every American voter."

Obama responded that it would be easier for a Democrat who had opposed the war from the outset to be the nominee, rather than one who had voted in favor of the resolution authorizing the war. "I think it is much easier for us to have the argument when we have a nominee who says, 'I always thought this was a bad idea, this was a bad strategy,' " Obama said.