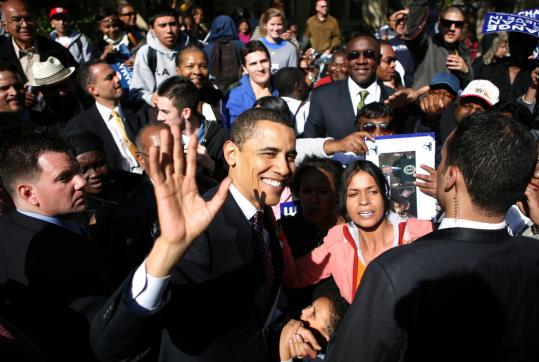 LOS ANGELES - Faltering in opinion polls among Latinos, Barack Obama took his campaign to heavily Hispanic south Los Angeles yesterday, telling a crowd made up mainly of technical college students that the struggles of blacks and Hispanics are the same.

"In the past few weeks, we've heard some cynical talk about how black and white and Latino folks cannot come together," the Democratic senator from Illinois told a boisterous crowd of about 1,600 at LA Technical Trade College. "I am reminded of the Latino brothers and sisters I worked alongside on the streets of Chicago decades ago," Obama said, recalling his days as a community organizer helping displaced steelworkers.

"One of the things that happened when the plants closed was that everybody lost their jobs" - blacks, whites, and Latinos, he said. "Because people were divided, they felt disempowered, and sometimes they turned on each other."

But "if we could bring people back together . . . they could recognize themselves in each other," Obama said.

Obama has trailed far behind fellow Senator Hillary Clinton among Latino voters, a factor that helped put the New York Democrat over the top in the Nevada caucuses last month. Obama is trying to shore up his relationship with Latinos before Tuesday, when many states with substantive Hispanic populations will hold primaries.

Senator Edward M. Kennedy stumped for Obama in New Mexico. The Obama camp hopes Kennedy's stamp of approval will help the candidate among Latinos, because Kennedy has a strong relationship with Hispanics. Many Latinos feel very close to the Kennedy family, said Cecelia Muñoz, senior vice president of the National Council of La Raza.

Obama pointedly noted his involvement in the immigration debate, a politically radioactive issue many other presidential candidates have largely avoided. "We are a nation of laws, but we are also a nation of immigrants," Obama told the crowd, which yelled, "Sí, se puede!" - Yes, we can - to punctuate Obama's remarks.

"My father, when he came here . . . he, um, he didn't look like he came off the Mayflower," said Obama, whose black father was from Kenya. The candidate wondered aloud why people were so focused on immigrants coming from south of the border, instead of from Poland or Ireland.

But the "town meeting" never turned into a Dr. Phil-style encounter about race relations between blacks and Latinos.

The audience - which included mainly Latinos and African-Americans - asked about education, Darfur, Latin America policy, and what qualities he'd like in a vice president. The last question brought a collective chuckle from the crowd, but Obama didn't bite.

"It's a little too early" to speculate on that, Obama said.

He added that he would make appointments to his administration who will restore "competence and respect" to government.

As for the second in command, "I want a candidate and a vice president that is reflective of the country," he added, without elaborating.