Expectations for campaign didn't pan out 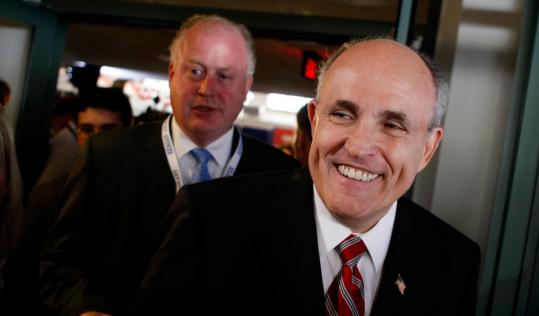 ORLANDO, Fla. - Rudy Giuliani's strange strategy was just one of many factors that contributed to his flop as a presidential candidate.

Entering the race a year ago, he was "America's mayor," a hero to many because of his conduct on and after Sept. 11, 2001, when Islamic terrorists attacked the city of New York. Six years after leaving office, the former mayor enjoyed a celebrity status and at almost every stop on the campaign trail, he was asked for autographs and posed for pictures.

Last September, while in London, Giuliani matter-of-factly told reporters: "I'm probably one of the four or five best-known Americans in the world." As mayor of New York and a hard-charging federal prosecutor before that, Giuliani cultivated an image of an intense and combative tough guy, a towering figure in a city of outsize characters.

But none of that was evident in the candidate who formally withdrew late yesterday after badly losing contests in six consecutive states. He rarely seemed comfortable with the rigorous campaigning required in Iowa and New Hampshire. He avoided confrontations with his opponents and, after a damaging duel with Mitt Romney in November over their records on immigration, government finance, and crime, Giuliani all but withdrew from the fight.

By the final week of his candidacy, Giuliani was citing his high-road approach as a virtue and was running as Mr. Positive, scolding Romney and John McCain for attacking each other's records. So much for the guy who was once the subject of a book titled "Nasty Man," written by one of his mayoral predecessors, Ed Koch.

"There's an X factor here, something inexplicable, a personal element," said Fred Siegel, an adviser to Giuliani's 1993 mayoral campaign and author of "The Prince of the City," a book that praised his mayoralty. "It's about him not being on his game, or being relatively passive . . . He didn't have the zip, the drive, and passion that people associated with him."

National poll numbers that showed him leading the GOP field proved illusory, as did what his campaign once claimed were "momentum-proof leads" in states like New York and New Jersey, which are among the 21 states that will hold Republican primaries or caucuses next week.

"His numbers were always based on name recognition," said John Zogby, a Utica, N.Y.-based pollster who has been conducting polls about him since Giuliani's first unsuccessful campaign for mayor in 1989. "His favorability ratings were always not bad, and he was always given credit for being a leader," Zogby said. "But by not being engaged in the whole process, he was bypassing the scrutiny, which was always going to come and which for him was always going to be rough - the relationships, the Bernie Kerik stuff, his family issues."

Kerik, once Giuliani's police commissioner, was indicted in November on federal tax and corruption charges. Three weeks later, The Politico reported that Giuliani's administration had buried expenses for his mayoral police security detail at a time when Giuliani was visiting his mistress, Judith Nathan, whom he later married. He called the story inaccurate and a cheap shot, but the damage was done.

Soon after the stories, a third of Giuliani's national support evaporated over a four-day period, according to the Rasmussen Reports daily tracking poll, the start of a long tailspin that ended with Tuesday's crash in Florida, where he finished a distant third with 14.6 percent of the vote.

Giuliani's campaign had plenty of money, and may have spent close to $60 million in pursuit of what turned out to be a single convention delegate, in Nevada. That puts him in a class with the late John Connally, a former Texas governor who won a single delegate after spending $11 million in his 1980 campaign.

For long stretches, Giuliani's campaign failed to create any news. Giuliani would merely rearrange his stump speech, adding emphasis at times on tax cuts and fiscal discipline or what he called "the terrorists' war on us" and strengthening the nation's armed forces.

Pundits and political analysts had long said a man favoring abortion rights, gay rights, and gun control couldn't win the Republican nomination. That was certainly a factor in the Giuliani strategy of limited engagement in some states, particularly Iowa, where religious conservatives are a huge force in the GOP caucuses. But the campaign wasted money on staff, mail, and radio ads in Iowa and Giuliani occasionally made dashes into the state, as if attempting to assert some relevance before he finished a dismal sixth there.

New Hampshire was different. There was an audience for his tough-on-taxes, tough-on-terrorists message. The campaign spent heavily on mail and television ads and Giuliani stumped often in the Granite State, though rarely for sustained periods. He failed to stop his slide.

With the Iraq war and terrorism receding from the public consciousness with the success of the military surge that McCain had championed, Giuliani became less of a factor.

"He's a man built for emergencies and the emergencies were fading," said Siegel. "There was nothing to remind people why they liked him."

Wayne Semprini, who was Giuliani's New Hampshire chairman, said McCain's phone banks were peeling away Giuliani supporters, with callers saying Rudy couldn't win and a vote for Giuliani would merely help Romney. "It was a smart tactic; I wish we had been in a position to do it ourselves," said Semprini, who was in Florida helping Giuliani in the days before yesterday's vote.

The campaign cut its TV budget at the end of the New Hampshire race and was outspent in the week before voting by Mike Huckabee, whose campaign was on a shoestring budget. Giuliani fell to fourth in New Hampshire, behind Huckabee.

Giuliani is not the first New Yorker who tried to bend the nominating process to perceived strengths, only to fail in Florida. In 1972, John V. Lindsay, in his second term as mayor of New York and running for president as a Democrat opposed to the Vietnam War, focused on the early caucus state of Arizona, then bypassed New Hampshire and headed to Florida, where his candidacy collapsed with a fifth-place finish.

Zogby said New York politicians suffer nationally because they face a bias based on stereotype. It's not a recent phenomenon, he said.