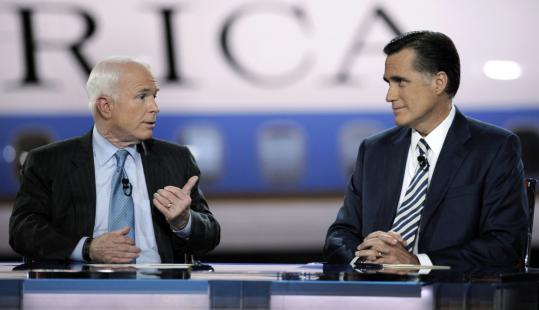 In their first confrontation in a recently narrowed field, John McCain and Mitt Romney last night traded attacks as each tried to paint the other as unreliably conservative.

The candidates participated in a Republican debate at the Ronald Reagan Presidential Library in Simi Valley, Calif., where 173 Republican delegates will be awarded Tuesday. The encounter took place just hours after Rudy Giuliani, a former New York mayor, withdrew from the race and endorsed McCain, setting up a direct confrontation between two rivals who just emerged from a combative Florida primary.

Romney described McCain as a legislator "outside the mainstream of conservative Republican thought," while McCain criticized the former governor of Massachusetts, saying he has presided over manufacturing-job losses, significant increases in fees, and a healthcare plan that has cost the state more than it can afford.

The exchange took place at the outset of the debate, just minutes after moderator Anderson Cooper of CNN quoted President Reagan's instruction to "not speak ill of any fellow Republican." As the two quickly violated Reagan's directive, they did so at first with broad smiles, while refusing to make eye contact.

Romney took issue with McCain's accounting of his economic and fiscal record and faulted him for misidentifying his lieutenant governor, Kerry Healey, mistaking her for his predecessor, Jane Swift.

"Facts are stubborn things," Romney said twice, responding to McCain's assertions about his gubernatorial record methodically and with poise, citing figures he appeared to compute on paper before him.

Later on they quarreled more aggressively over an allegation repeated by McCain that Romney once supported setting a date for a withdrawal from Iraq, based on a quotation McCain read from a nine-month old interview in which Romney discusses "timetables and milestones." At campaign stops in Florida, McCain said Romney's vague words indicated that he intended to "wave the white flag of surrender."

"I have never, ever supported a specific timetable for exit from Iraq," Romney said with exasperation as the two testily interrupted each other. "How is it that you're the expert on my position when my position has been very clear?"

Romney accused McCain of practicing "Washington-style old politics" and "the type of dirty tricks Ronald Reagan would have found reprehensible."

Reagan's name came up frequently as McCain; Romney; Mike Huckabee, a former governor of Arkansas; and Representative Ron Paul of Texas took their seats in an open-ended, 90-minute conversation held in front of a reassembled plane once used as Air Force One. Nancy Reagan sat in the front row, alongside California's governor, Arnold Schwarzenegger, who is expected to endorse McCain today, according to news reports.

Ten Republican candidates met in the same venue nearly nine months ago for their first debate of the campaign and similarly laid claim to the Reagan legacy. Although four remained last night, the debate was dominated by the two front-runners.

"And I want to make sure everybody understands this isn't a two-man race," Huckabee said.

The Reagan conservative coalition remains fractured, in part, because the party's two leading candidates have strayed in significant ways from party dogma during the careers. Each tried to suggest the other has pushed liberal policies.

"He has saddled the people of Massachusetts with a $245 million debt because of the big government-mandated healthcare system," McCain said.

Romney defended his health insurance plan by likening it to welfare reform, saying that it would lead to "no more free riders" by requiring those who could afford it to purchase insurance instead of relying on emergency room treatments.

McCain launched several attacks on Romney. "Ronald Reagan would not approve of someone who changes their positions depending on what the year is," McCain said, when asked whether Reagan would endorse him. (Only Romney unequivocally said yes.)

The current Republican president was spoken of far less approvingly; none of the candidates rushed to defend George W. Bush when asked whether the country was better off than it was when he came to office eight years ago.

"It's not going to get better unless we have some serious leadership in Washington," said Huckabee.