For Democrats, a new electorate

Spike in turnout could benefit both Clinton and Obama 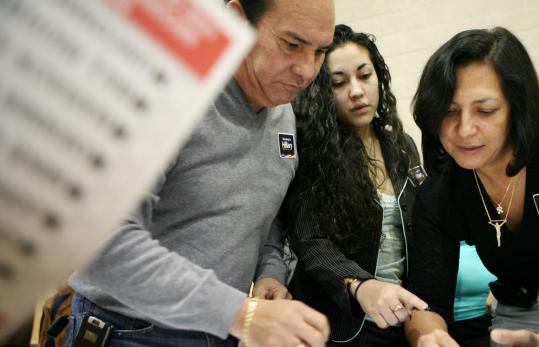 They are younger, more diverse, and less rigid in their party loyalty. More of them are women. And they are coming out in droves.

The voters who are shaping the Democratic primary race form a very different electorate than the one that awarded Senator John F. Kerry the party's nomination in 2004. But while it is evident that voters this year are changing the face of the Democratic Party, the beneficiary of their influence is difficult to predict.

The spike in Democratic voter turnout in primaries and caucuses from 2004 to 2008 is staggering - a 90 percent increase in Iowa, 30 percent in New Hampshire, and 83 percent in South Carolina. Florida Democrats were on pace last night to more than double their turnout from four years ago, while Nevada, whose noncompetitive 2004 caucuses drew only 9,000 people, this year saw 118,000 people vote.

A deeper examination of the numbers reveals trends in the early states that bode well for each of the two leading Democrats, Senators Barack Obama and Hillary Clinton, as their battle moves to the 22 states that vote next Tuesday. The key will be whether the dominant turnout trends on Super Tuesday favor Clinton, or tip toward Obama.

"Each of these candidates has somewhat different coalitions, and each of them has members of their coalitions who are often [from] low-turnout groups," said Mark Mellman, who was Kerry's pollster in 2004 but is unaffiliated this year.

Obama has benefited from a surge in turnout among younger voters, who have picked him overwhelmingly over his rivals. In Sat urday's primary in South Carolina, voters ages 18 to 29 made up 14 percent of the electorate, compared with 9 percent in 2004, according to exit polls. That means that 43,000 additional 18- to-29-year-olds cast ballots this year. That big increase contributed to Obama's 28-point victory over Clinton Saturday, because those voters picked Obama over her, 67 percent to 23 percent. Obama's strong appeal among younger voters helped him cut into Clinton's advantage among white voters: Though she racked up big margins among older white South Carolinians, Obama beat her among white 18- to 29-year-olds, 52 percent to 27 percent, exit polls show.

Getting young people to the polls and maintaining such wide margins will be key for Obama. His challenge is that he cannot possibly devote as many resources to mobilizing young voters in 22 states as he did in the handful of early-voting states.

Obama is also emboldened by his success among independents and Republicans, who have voted in Democratic primaries and caucuses in unprecedented numbers, and among black voters, who propelled him to his huge victory in South Carolina. Obama's campaign manager, David Plouffe, told reporters on a conference call yesterday that the expanding universe of Democratic primary voters was a good sign for their campaign.

"I think you're going to see very strong turnout across the board next Tuesday, and we think that's good for the party and the country," Plouffe said. Clinton's campaign sees good omens in other trends that have emerged from the early-voting states. One is her success in the Nevada caucuses among Latino voters, who made up 15 percent of caucus-goers. Latinos in that state chose Clinton over Obama 64 percent to 26 percent.

Exit polls from 2004 are not available for Nevada, so it is difficult to measure increased participation among Hispanics there. But the campaigns are courting Hispanics heavily this cycle, believing they will have a significant presence at the ballot boxes in Feb. 5 states such as Arizona, New Mexico, and California.

Another thing to watch next Tuesday is how Clinton fares among women, who have made up roughly 6 in 10 Democratic voters in the early-voting states. Her performance among women has mirrored her fate in the primaries and caucuses to date: She beat Obama handily among women in New Hampshire and Nevada, the two states she won, but Obama beat her among women in Iowa and South Carolina, the two states he won.

Adrienne Elrod, a Clinton spokeswoman, said one way the campaign is targeting women is by emphasizing Clinton's plan for universal healthcare and her proposal to improve education, including by making college more affordable.

"Those two issues are important to the women that we're targeting," she said.

John Della Volpe, polling director at Harvard University's Institute of Politics, said one important element of the two candidates' strategies over the next week will be to blunt each other's success among their core supporters. He said it was no coincidence that Clinton won New Hampshire, a state where she captured more of the 18- to 29-year-old crowd than she has elsewhere.

"Hillary knows she does not have to win the youth vote; she has to suppress the margin," Della Volpe said.

By the same token, Della Volpe said, Obama is unlikely to beat Clinton among Latinos, but he can work to close the gap. "That's the chess game," he said.

Both campaigns are scrambling to shift from the sequential, state-by-state phase of the race to Tuesday's mega-primary. Clinton and Obama must now rely more on surrogates, TV ads, and media coverage than they ever have. The breadth of states that will vote then also makes it much harder, not to mention prohibitively expensive, to run an extensive ground operation everywhere that matters.

But Mellman said the increased turnout among Democratic voters could have as much to do with the historic, hard-fought, closely watched race as it does the campaigns' get-out-the-vote campaigns. That would mean that turnout could remain high going forward even without the intense neighborhood canvassing and voter-outreach activities the campaigns engaged in in Iowa, New Hampshire, and South Carolina.

Many Democrats and political analysts believe that excitement has major implications for the general election, too. The surge in Democratic voter participation, which far outpaces the Republicans, augurs well for the party's chances in November, they say.