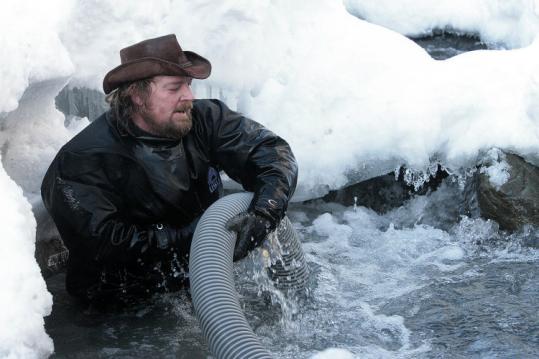 GIRDWOOD, Alaska - The snow is still knee-high along the banks of Crow Creek, where men are crouching up to their chests in near-freezing water, and the air is several degrees colder.

But for Mike Telgenhoff and his companions, this is a fine day to look for gold.

"We do real good in the wintertime because the crick's so low," said Telgenhoff, dressed in a sopping leather hat and drysuit. "I've made a lot of money at it, but I've spent a lot, too. You don't get rich doing this."

But with gold prices reaching an all-time high of $900 an ounce and the economy slumping, Alaska expects to see more and more people trekking to the edge of the continent in search of gold.

Telgenhoff and two other miners normally have this narrow valley southeast of Anchorage all to themselves after the winter freeze. But once the spring thaw arrives, they anticipate seeing additional prospectors.

Membership in gold prospecting clubs is climbing nationwide, along with sales of pans, dredges, metal detectors, and other small-scale mining equipment. A trade show recently hosted by the Gold Prospectors Association of America in Orange County, Calif., typified the trend.

"I saw more people walking out with more metal detectors and sluice boxes than I can remember in a long time," said Ken Rucker, general manager of the 45,000-member association. "That $900 is really getting to people."

The group has received hundreds of calls and e-mails from interested gold seekers. New memberships are increasing, and the number of membership renewals at the close of 2007 was twice as high as the year before, said Brandon Johnson, the director of operations. As a result, the association is preparing to hire more staff.

Investors typically turn to gold during times of political and economic instability. The falling dollar, threat of a recession, political troubles in the Middle East, and rising oil costs have raised the metal's appeal as a safe investment.

The heightened interest is nowhere near that of the famous 19th-century gold rushes in California, Alaska, and Canada's Yukon Territory. Those grizzled prospectors have long since been replaced by recreational gold hounds - mostly seasonal workers and retirees.

Roughly 150 families in Alaska live off gold they have collected, according to state officials. But longtime prospectors say small-scale mining is generally unpredictable, tough on the body, and yields little to no profit.

"If you love ditch-digging, you'll just love gold mining," said Steve Herschbach, owner of Alaska Mining and Diving, a mining-supply shop in Anchorage. "It's just hard labor. I knew a guy up in Nome who did really, really well, but he was like a human backhoe. The guy could just shovel all day long."

Mining clubs are popular with hobbyists who want to avoid paperwork and fees required to stake claims to gold. The groups have forged various agreements that allow members to mine on government or private land.

"It's great to just go out and maybe find a little bit and just enjoy being out in nature," said Rick Segebrecht, a plumber in Oregon, Wis., who started prospecting there five years ago. "And there's always that chance every time we go out, you could find the big one."

The Gold Prospectors Association, the largest gold-prospecting group in the country, lets members operate dredges and sluice boxes, which are metal or plastic channels designed to catch gold.

A club called the New 49ers in the former gold mining settlement of Happy Camp, Calif., has access to 70 miles of federal mining claims along the Klamath River.

"That's almost the only way to get into mining anymore because there are so many bureaucratic steps," said New 49ers President Dave McCracken. "We take care of all the legal and political stuff that surrounds this activity."