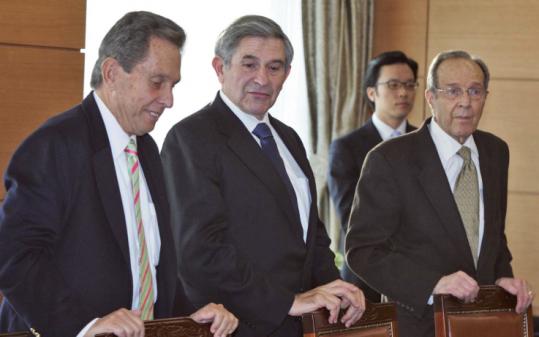 WASHINGTON - Paul Wolfowitz, the former World Bank president and former deputy secretary of defense who was instrumental in the US decision to invade Iraq in 2003, has been named chairman of a panel that advises the State Department on arms-control issues.

Wolfowitz, now a visiting scholar at the American Enterprise Institute in Washington, will head Secretary of State Condoleezza Rice's International Security Advisory Board, the State Department said yesterday in a statement.

"The ISAB provides the Department of State with a source of independent insight, advice, and innovation on all aspects of arms control, disarmament, nonproliferation, political-military issues, and international security and related aspects of public diplomacy," the State Department said.

Wolfowitz was among the senior US officials who warned of Iraq's alleged weapons of mass destruction capabilities, a key justification for invading Iraq and toppling the late dictator Saddam Hussein.

"Disarming Iraq of its chemical and biological weapons and dismantling its nuclear weapons program is a crucial part of winning the war on terror," Wolfowitz told the Council on Foreign Relations in New York in January 2003, two months before the US-led invasion of Iraq.

A United Nations report in September 2004 found that Iraq possessed no weapons of mass destruction at the time of the invasion.

A US-appointed fact-finding commission reached the same conclusion in March 2005.

"The advice given by Paul Wolfowitz over the past six years ranks among the worst provided by any defense official in history," Cirincione said. "I have no idea why anyone would want more."

Veronique Rodman, a spokeswoman for the American Enterprise Institute, said she had no comment on Wolfowitz's appointment.

Wolfowitz, 64, resigned from the World Bank presidency in May, less than halfway through his five-year term, amid criticism over his securing a pay raise for his companion.