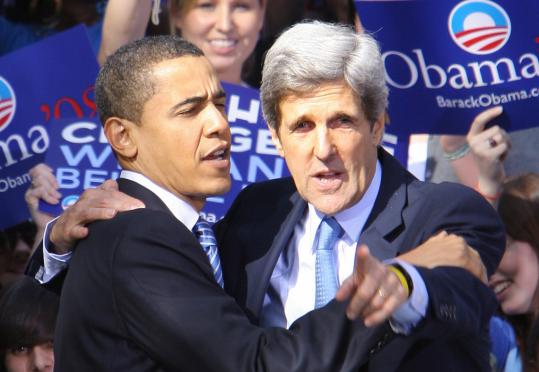 WASHINGTON - Senator John F. Kerry, who believes his failure to respond forcefully to attacks on his military record when he ran for president in 2004 contributed to his defeat, has embraced a new role as chief defender when his Democratic Party colleagues - including presidential candidate Barack Obama - are dogged by smear campaigns.

Since President Bush defeated him four years ago, the junior senator from Massachusetts has come to the defense of House Speaker Nancy Pelosi, US Representative John Murtha, and an Iraq war veteran running for Congress. Kerry has aggressively defended them when conservative activists and anonymous detractors targeted them with rumors.

Kerry's latest mission: taking on what he calls the "disgusting lies" on the Internet and in the right-wing media questioning Obama's patriotism and faith. Kerry, who recently endorsed Obama, vowed yesterday to use his unique experience to defend the Democrats from the same kind of "swift boating" tactics that Republican operatives used to help sink his presidential campaign.

"Whoever our nominee is, I will absolutely do whatever is necessary to fight and condemn these smears," Kerry told the Globe yesterday. "We are going to push back and try to hold people accountable. The worst thing you can do is be silent. You have to stay at it. That was [our] mistake [in 2004]. There should have been more dollars spent putting out the truth."

During the 2004 race, a group called Swift Boat Veterans for Truth aired television ads saying that Kerry, the Democrats' presidential nominee, had made "exaggerated claims" about his four-month tour of duty as the skipper of a Navy patrol-boat crew in South Vietnam. The group said Kerry - who won several medals while serving in Vietnam but later became an outspoken opponent of the war - made "phony" charges that US troops committed war crimes.

The ads, paid for by leading Republican contributors but not directly linked to the Bush campaign, made headlines and led nightly newscasts. Kerry, according to top aides, deeply regrets that he did not aggressively confront the Swift Boat Veterans for Truth attacks. He said yesterday he is still trying to set the record straight.

But Kerry has also sought to vindicate himself by coming to the aid of fellow Democrats who find themselves in similar predicaments.

In the fall of 2005, for example, Kerry was among the first to defend Murtha, a Pennsylvania Democrat and decorated former Marine Corps officer, against right-wing attacks following Murtha's vociferous opposition to the Iraq war. Kerry took the Senate floor to defend Murtha, a fellow Vietnam veteran, and took part in grass-roots efforts to highlight Murtha's courageous military service.

"It disgusts me that a congressman who has never worn the uniform of our country stands there in silence as a veteran home from Iraq has his service disparaged," Kerry wrote at the time in a statement posted on numerous blogs and published in news reports.

Salacious political rumors and whisper campaigns are as old as American politics, but the advent of the Internet has made it more difficult for a candidate to bring them under control.

The falsehoods about Obama are the latest example. A chain e-mail falsely reports that Obama is a Muslim who was indoctrinated as a youth in a radical Islamist academy when his family lived in Indonesia. It also incorrectly alleges he was sworn in as a senator using a Koran and is anti-American for refusing to put his hand over his heart during the Pledge of Allegiance.

Obama is a member of the United Church of Christ in Chicago, used his family's Bible for his Senate swearing-in ceremony, and has led the pledge in the Senate.

Though the rumors have repeatedly been debunked, the e-mail that spread them has reportedly shown up recently on a Republican Party website and has been widely distributed in South Carolina, where Democrats vote in a primary Saturday.

In a taped telephone message, Kerry tells South Carolina voters: "I can assure you, [Obama] lives his Christian faith, and that's the only faith he's ever practiced. So if you get an ugly e-mail with false rumors, do your part to shoot down 'swift boating.' "

But Kerry worries the political smear tactics will only get worse.

"The attacks in 2004 started as an anonymous e-mail campaign," he said in the interview yesterday. "This is a highly developed process by which [Republicans] try to destroy people on a personal level. l think it's cowardly and I dislike it intensely."