Obama ties to embattled donor go back over 15 years 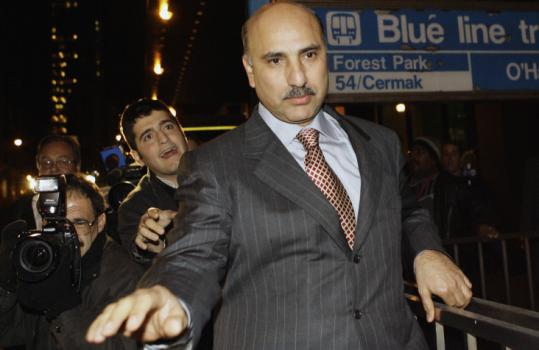 But these days Rezko is snared in a nasty political scandal and facing a federal corruption trial that begins next month. Senator Hillary Clinton invoked his name and his "slum landlord business" in a Democratic presidential debate Monday night with Obama. Obama has been sending the campaign money to charities in an effort to distance himself from the Chicago businessman, including $41,000 over the weekend.

Obama has also been forced to explain how Rezko got tangled in the purchase of the Obama family home and other ties to Rezko, some of them going back more than 15 years. If federal prosecutors are right, his ties to Rezko may mean Obama's campaign unwittingly accepted money generated by illegal activities.

Obama, who has an unblemished reputation after 11 years in public office, has been accused of no wrongdoing involving Rezko.

"The senator exhibited some bad judgment in continuing the relationship once it became clear that Tony Rezko had such serious clouds overhead," said Cindi Canary, director of the nonpartisan Illinois Campaign for Political Reform.

The facts of the relationship between the two men have been public record for more than a year and so far have not hurt Obama with voters.

State Senator John Cullerton, a Democrat, said that voters will realize that Obama is blameless and that the only one charged with corruption is "this Rezko, who thank God I've never met."

"He was a guy with money who glommed onto up-and-coming young politicians like Barack," Cullerton said.

Rezko faces a Feb. 25 trial. He is charged with fraud, attempted extortion, and money laundering for allegedly plotting to get campaign money and payoffs from firms seeking to do business before two state boards.

Rezko, 53, faces a separate federal charge of cheating out of $10 million in connection with the sale of pizza restaurants.

Obama's name has not come up in connection with any of the corruption charges swirling around Rezko. In fact, prosecutors indicate that the source of Rezko's clout was somewhere within the administration of Governor Rod Blagojevich, a Democrat.

On Oct. 11, 2006, the day federal prosecutors unsealed the major corruption charges against Rezko, Obama immediately sent $11,500 in contributions to charities ranging from Habitat for Humanity to the Boys & Girls Clubs.

Obama aides say that is all the money that Rezko has contributed to Obama's campaigns since he first ran for the Illinois Senate in 1996. They say there's no telling for sure how much additional money Rezko has raised for the senator over 15 years by putting the arm on friends and business associates. Obama's aides estimate the amount at $60,000, though the Chicago Sun-Times reported last year that Obama has received at least $168,000 from Rezko and his associates over the years.

Some $86,000 has been sent by the Obama campaign to various charities after the money was linked in some way to Rezko.

On Nov. 1, 2006, three weeks after the Rezko indictment, the Chicago Tribune reported that Rezko was involved in the Obama family's purchase of a red-brick home on a quiet South Side street near the University of Chicago, where Obama has taught law and wife Michelle is a vice president.

The Obamas closed on the house on June 15, 2006, for $1.65 million. The same day, Rezko's wife, Rita, bought a lot next door from the same sellers for $625,000. Obama later told the Sun-Times that the sellers had required that both of the lots be sold simultaneously.

The Rezkos later sold the lot, and also sold the Obamas a 10-foot-wide strip of land from the property for $104,500.

Obama called that a "boneheaded" mistake.

"It was a mistake to have been engaged with him at all in this or any other personal business dealing that would allow him, or anyone else, to believe that he had done me a favor," Obama said in a written statement. "For that reason, I consider this a mistake on my part and I regret it."