He will address black voters in S.C. 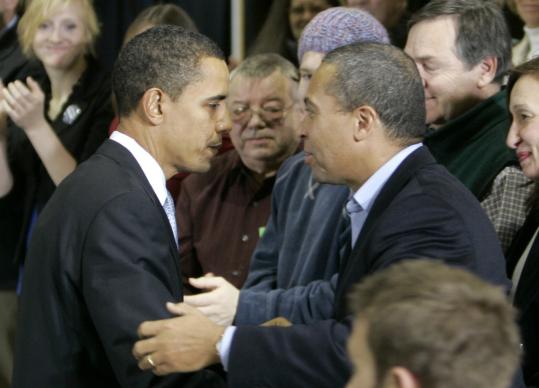 They share life trajectories and campaign messages. To try to make sure they share the same success, Governor Deval Patrick will stump for Barack Obama in churches and town hall meetings across South Carolina next weekend.

His very presence could be a rebuttal to black voters' doubts that an African-American candidate can win in a majority-white electorate, a former Patrick adviser said yesterday.

"If Barack had won New Hampshire, like the polls said, then probably that would be enough" to reassure voters that Obama can win the Democratic nomination and then the White House, said John Walsh, chairman of the Massachusetts Democratic Party and Patrick's former campaign manager. "But now there's this, 'Maybe he can, maybe he can't.' "

Patrick is one of the country's most successful African-American politicians - he is the nation's only black governor and just the second elected since Reconstruction - and "who he is could really help," Walsh said.

Patrick is emerging as one of the Illinois senator's most visible campaigning surrogates. In Iowa, he campaigned by Obama's side, charming audiences who didn't know him with his up-from-poverty life story and message of hope that neatly dovetailed with Obama's. In New Hampshire, Patrick knocked on doors and spoke at house parties on Obama's behalf. And on political shows on CNN and other national cable networks, he has spoken glowingly of Obama. They share a common political vision and vocabulary, which enhances Patrick's effectiveness as a surrogate.

"In Governor Patrick, you've got somebody who believes in the same ideals the senator does, so he's a very persuasive surrogate to deliver that message," Doug Rubin, Patrick's chief of staff and formerly his senior campaign strategist, said yesterday.

Now, Patrick is being dispatched to campaign in South Carolina, whose Jan. 26 primary is a critical test for Obama, who saw his momentum from winning the Iowa caucuses last week stall after his surprise loss to Clinton in New Hampshire this week.

One of two states where the Democratic candidates are competing before Super Tuesday on Feb. 5, South Carolina is one of the few places in the country where African-Americans are expected to make up more than half of the electorate.

Polls show Obama with a comfortable lead in South Carolina, due to the surge in support from African-American voters following a football stadium rally with Oprah Winfrey in December and his win in Iowa. But last fall, African-American voters' doubts about Obama's electability in the general election dragged down his numbers in the Palmetto State, and it remains uncertain whether those doubts could be revived by his New Hampshire loss.

Jen Psaki, a spokeswoman for Obama, said yesterday that Obama had proven he could win over a predominantly white electorate with his first-place showing in Iowa.

But she said that Patrick's willingness to campaign for Obama "speaks to his commitment to furthering our message that anything is possible, and that we believe that people of all backgrounds and races can come together and support a candidate who doesn't look exactly like them."

Patrick is scheduled to appear at town hall meetings and churches in South Carolina next Saturday and Sunday, and part of his mission is to reach out to African-Americans, said Liz Morningstar, who runs Patrick's political committee.

Patrick, a first-term governor who could be vulnerable to accusations that he is neglecting his duties if he spends too much time on the presidential campaign trail, has restricted his out-of-state appearances for Obama to weekends. He will fly home next Sunday night and spend Martin Luther King Day in Boston, Morningstar said.

The governor has also been working for Obama in his home state, one of 22 Democratic primaries or caucuses on Feb. 5. He endorsed Obama at a rally on Boston Common last October that drew thousands. The day after the New Hampshire primary, he attended a fund-raiser for Obama in downtown Boston.

And his political committee is now at work helping the Obama team prepare for the Massachusetts presidential primary. Morningstar said Obama's ground team met yesterday with her and representatives from the offices of Senator John F. Kerry, who endorsed Obama this week, and Congressman William Delahunt, another Obama supporter.

"We're working at making sure we have a Commonwealth-wide organization that is based on the same principles that we practiced in our own campaign - grass-roots discipline and person-to-person politics," she said.

The Patrick political committee has not shared its voter list with Obama's campaign, Morningstar said, but it has sent several e-mails to 45,000 Patrick supporters. She said Patrick has been careful not to alienate people backing other candidates, asking them to consider Obama but adding that he understands the choice is very personal.

Last month in Iowa, a state where few voters recognized his name, Patrick gave a version of his stump speech from the 2006 gubernatorial campaign, echoing Obama's themes of hope and unity. Patrick told Iowans he believed that "we don't have to agree on everything before we can work together on anything," much as Obama talks about the need to "disagree without being disagreeable."

Friends for more than a decade, Patrick and Obama have much in common - they were both raised by single mothers, made their way to Harvard Law School, and worked as civil right lawyers. They both launched improbable campaigns for statewide public office with relatively little political experience against establishment figures, in Patrick's case Attorney General Thomas F. Reilly. Both used Chicago-based David Axelrod as their top strategist.

Any Massachusetts resident who watched Obama's primary night speech in New Hampshire might have felt a jolt of recognition when Obama led the crowd in chanting, "Yes, we can!" It sounded like an echo of Patrick's campaign slogan, "Together, we can."

"Yes, we can!" was the signature line of Patrick's first major speech at the state Democratic Party convention in Lowell in 2005. As it turns out, Obama had used it in his 2004 US Senate campaign.

Patrick advisers said they discovered this when a Boston reporter asked at the time whether Patrick had cribbed it.

In response, Patrick's aides produced a long list of others who had used the line rhetorically, from farm worker activist César Chávez to the children's television character Bob the Builder.

"It's not like it's 'Fourscore and seven years ago,' " said Larry Carpman, a Democratic consultant in Boston who advised Patrick in his campaign. "It's a fairly common three words to put together."