Embarrassed by predictions on Clinton, Obama 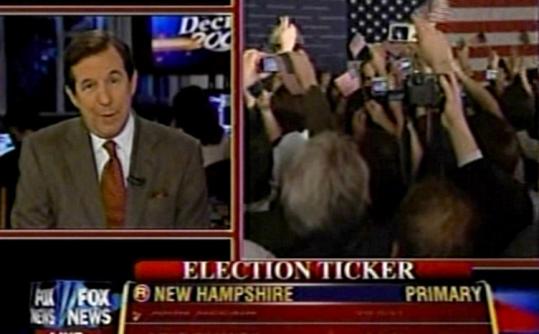 Fox News anchor Chris Wallace was philosophical about the nature of predicting election results: "I love it. One of the great things about politics is that it doesn't stay on a script."
Email|Print| Text size – + By Joanna Weiss and Amy Farnsworth Globe Staff and Globe Correspondent / January 10, 2008

If there were multiple winners and losers in Tuesday's New Hampshire Democratic primary, the class of political pundits took one of the more resounding losses.

For days, newspapers, blogs, and TV stations had pounced on poll numbers showing a 13-point lead in New Hampshire for Barack Obama. There were seemingly endless reports about a quick Obama coronation in a key state - and a once-vaunted Clinton campaign in disarray.

Then came the results: Hillary Clinton 39 percent, Obama 36. And then, the self-loathing, as scores of pundits wondered aloud how they could have been so wrong.

Arnie Arnesen, a New Hampshire talk-show host and frequent commentator who expected an Obama win, said she went into a brief state of panic as she granted interviews Tuesday night. She was captured on film by staff from Britain's Guardian newspaper, saying, "How can I answer when I can't explain?"

"I'm thinking, I need to retire," Arnesen recalled yesterday, after the dust had settled. "I've got to shoot myself and take myself out of this business! How can I not know my state?"

But when exit polls showed Clinton ahead in a closer-than-expected race, Wallace said, it was clear that the widely predicted, sure-thing Obama win was in doubt.

"My immediate reaction was excitement," Wallace said by telephone from South Carolina, where he is preparing for today's Republican presidential debates. "I love it. One of the great things about politics is that it doesn't stay on a script."

Apparently, though, the script was hard to abandon.

As evidence mounted that Clinton would sustain her lead throughout the night, reporters, TV anchormen, and commentators were reluctant to change the storyline. At 8:25 p.m., the Associated Press moved a story hedging its bet for Obama.

At the same time on MSNBC, political analyst Charlie Cook was still forecasting a big Obama win. "I wish I could say I predicted it, but I didn't," Cook said. "This Obama thing, it turned out to be a hell of a lot bigger than I ever thought."

On CNN's Larry King Live, journalist Bob Woodward seemed both chastened and irritated: "We all have mud on our faces in the predicting business, in the polling business, and this sense of certainty and momentum and inevitability. And it's garbage."

On MSNBC, anchor emeritus Tom Brokaw said if journalists don't "temper that temptation to constantly try to get ahead of what the voters are deciding," then viewers and readers "are going to begin to make some judgments about us, if they haven't already."

Democratic blogger Markos Moulitsas, founder of the popular website dailykos.com, said in an e-mail that he takes issue with pundits "who proclaim stuff as if theirs is the word of God. . . . I've learned in my years that politics is too unpredictable to ever get a solid handle on things. Thus, any proclamations of certainty are doomed to eventual failure and, in a just world, ridicule."

That's why Moulitsas's own predictions, posted to his blog Tuesday morning - Obama 45 percent, Clinton 26 percent - came with a hefty caveat.

"Can I successfully pull out numbers from you-know-where two elections in a row?" he wrote. "I would certainly bet against it."

At least one pundit who predicted an Obama win in newspaper interviews had an escape hatch.

Wayne Lesperance, a political science professor at New England College, said a reporter from the Denver Post called him at midnight on Tuesday to ask if he wanted to change his quote anticipating an Obama win.

"It was very generous of them to let me do that," Lesperance said, "because I had it completely wrong."