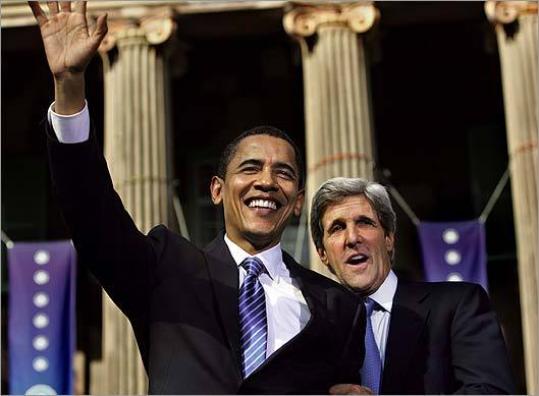 Bringing his fat fund-raising Rolodex and foreign policy gravitas, John F. Kerry, the Democratic nominee for president in 2004, endorsed Barack Obama today, declaring that the Illinois senator has "the greatest potential to lead a transformation, not just a transition."

The junior US senator from Massachusetts was joined in the Obama camp later in the day by Senator Tim Johnson of South Dakota and veteran Congressman George Miller of California. After Obama's surprise defeat in the New Hampshire primary on Tuesday, the flurry of big-name endorsements may help him pick up steam again heading into a long, hard fight with Hillary Clinton in Nevada and South Carolina later this month, and then in 22 states that vote on Feb. 5.

Kerry dwelled on Obama's inspirational power, saying Washington will have "no choice but to listen." He scoffed at the idea -- which Clinton has promoted -- that Obama is offering false hope and is too young and inexperienced for the Oval Office. Thomas Jefferson was just 33 when he wrote the Declaration of Independence, and Martin Luther King Jr. only 26 when he led the Montgomery bus boycott, Kerry noted.

"My friends, when we choose a president, we are electing judgment and character, not years on this earth," he said at a rally in Charleston, S.C.

Kerry has an unparalleled list of three million supporters from 2004, a rich resource for Obama's fund-raisers. He sent an e-mail to them on Obama's behalf yesterday, and Obama is expected to send an appeal today.

Kerry, who lost narrowly to President Bush in 2004, passed over his running mate, John Edwards -- all the more stinging since Kerry made his endorsement public in Edwards' native state of South Carolina, which Edwards won in 2004 and where he needs to vault ahead to revive his flagging campaign.

The two men have been on less-than-close terms since Edwards complained after they lost the White House that Kerry would not let him fight back against the "Swift Boat" attacks on Kerry's record of service in Vietnam. Kerry retorted that it was Edwards who refused to wade into the fight.

Edwards issued a statement this afternoon that was by turn gracious and dismissive. "Our country and our party are stronger because of John's service, and I respect his decision," he said, but added: "I continue to believe that this election is about the future, not the past."

Kerry and Clinton also have bad blood going back to 2006, when Kerry made a gaffe when he suggested that young people who don't do well in school get "stuck in Iraq." Although Kerry aides said he had misspoken and meant to poke fun at Bush, not the troops, Clinton quickly deemed the remark "inappropriate."

By contrast, Kerry did an important favor for Obama by asking the young Senate candidate to be the keynote speaker at the 2004 Democratic National Convention in Boston, giving him the national platform to begin establishing his reputation as a rising star.