THIS STORY HAS BEEN FORMATTED FOR EASY PRINTING
MOVING SOUTH

Thompson vows to 'make my stand' for a strong showing in S.C. 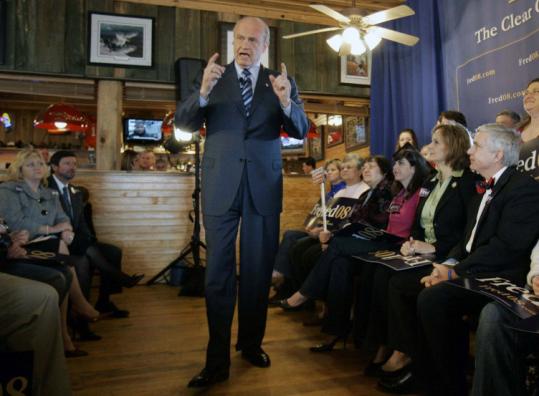 GREENVILLE, S.C. - With his Republican rivals jockeying for victory in New Hampshire, presidential hopeful Fred Thompson sought yesterday to boost his support in the state considered critical to his campaign.

"I don't know of any better place to stand my ground and test my case than in South Carolina," Thompson told about 200 people at a pancake house in the northern part of the state as he began an 11-day bus tour.

Several hours later, he said primary results in New Hampshire and in Michigan next Tuesday will factor into whether he stays in the race - but that South Carolina will be key.

"This is where we make our stand - this is where I have chosen to make my stand," Thompson told a crowd at a barbecue restaurant. He later told reporters he needs to do well in South Carolina, which votes Jan. 19.

"There's no question about it. It could prove at the end of the day that South Carolina is determinative as far as I'm concerned, but we're not there yet," he said.

In November, one state poll had the former senator from Tennessee in a virtual tie for the lead in South Carolina with former New York mayor Rudy Giuliani and former Massachusetts governor Mitt Romney. But recent polls show Mike Huckabee leading in South Carolina, with Thompson's support tough to read. In one survey, he placed second; in two others, he placed fourth and fifth. Analysts and Thompson supporters say he must do well in the Republican primary here to continue a viable campaign through Feb. 5, when more than 20 states hold primaries or caucuses.

"If he does not do well here, it's pretty much over," said Larry Grooms, a South Carolina state senator and a regional chairman for the campaign.

The urgency is not lost on either the candidate or his backers. Yesterday, Thompson supporter Chris Rush asked the candidate how to gain more media attention.

The bus tour strategy worked well for Thompson in Iowa, where he finished ahead of the fourth- or fifth-place slot that had been predicted, said Thompson campaign spokesman Jeff Sadosky.

"I feel like he's the one candidate who has the courage to tell it like it is," she said. "I just wish he'd announced a little sooner."

But some who attended Thompson's appearances yesterday said they were still making up their minds.

"We like what he says and how he says it," said Carole Crow. But she said she was leaning toward Senator John McCain of Arizona or Romney.

"You feel like you want to support somebody who can make it all the way," Crow said.