THIS STORY HAS BEEN FORMATTED FOR EASY PRINTING
OUTSPENT

A comeback - even in S.C. - seen as unlikely 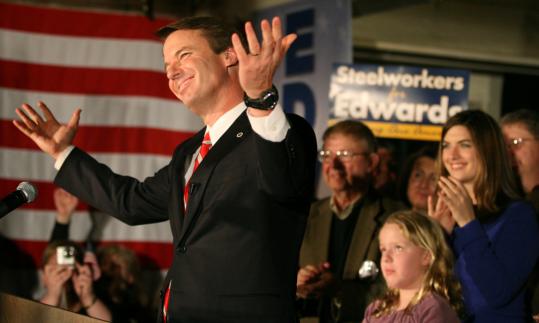 Former senator John Edwards accepted his third-place finish last night in Manchester but vowed he would stay in the race "until we have actually restored the American dream." (Dominic Chavez/Globe Staff)
Email|Print| Text size – + By Bryan Bender Globe Staff / January 9, 2008

MANCHESTER, N.H. - John Edwards vowed yesterday to continue his populist struggle for the Democratic presidential nomination despite a distant third-place finish in the nation's first primary, vowing to keep alive his passionate campaign against corporate interests in Washington that he insists have a death grip on working-class Americans.

"I am in the race until we have actually restored the American dream and strengthened and restored the middle class," Edwards told cheering supporters last night. "I have met too many Americans whose voices have not been heard in this democracy."

But facing more popular and better-financed rivals in Hillary Clinton and Barack Obama, it seems unlikely that Edwards can reverse his political fortunes - even in his native South Carolina, where the next Democratic primary is Jan. 26 and where he won four years ago - according to several political scientists who have followed his career.

Edwards's strategy coming out of New Hampshire appears to rest on the hope that one of the two leading candidates will falter and he will emerge in later primaries as the only alternative for Democrats, according to Alan Abramowitz, a political science professor at Emory University in Atlanta.

"His options for going on are just to stay in the race and run a low-budget campaign and hope . . . something happens that opens things up again," said Abramowitz. "But it is a pretty remote chance."

J. David Woodard, a political science professor at Clemson University in Clemson, S.C., where Edwards is scheduled to hold a noontime rally today, said Edwards is airing a lot of television ads in the state playing up his Carolina roots. He was born in South Carolina but has struggled to gain traction and remains significantly behind Clinton and Obama in recent polls.

Beyond taking on yesterday's winner, Clinton, Edwards also must contend with the widely popular Obama, who won a surprise victory in the Iowa caucuses last week and ran a close second in New Hampshire.

"With half the Democratic electorate African-American down here, he has a huge mountain to climb," Woodard said of Edwards. "They have Barack Obama now. I can't imagine why they would want a rerun like John Edwards when they have a real alternative."

The mood in the Edwards camp was subdued yesterday afternoon when the candidate appeared briefly at his Manchester headquarters to thank volunteers for their efforts in the Granite State. Even Edwards appeared to see the writing on the wall.

"Thank you guys. Thank you so much. Thank you for doing this," he said somberly at one point.

To his disappointed supporters in New Hampshire - including many who remained loyal since voting for him in the 2004 primary, when he came in fourth - Edwards's anticipated loss began to hit home yesterday afternoon.

Michael O'Rourke, a 40-year-old software designer from Manchester who works in Boston and supported Edwards four years ago, said he was hoping Edwards would at least come in second. "He seems more personable than the others," said O'Rourke.

The Edwards campaign, for its part, put forth a brave face.

But he had little to say about Edwards's chances in South Carolina or in the 22 primaries on "Super Tuesday" on Feb. 5.

But facts are facts, Abramowitz said. "It is going to be very difficult for him to go on [after South Carolina] because he is going to run out of money," he said.