THIS STORY HAS BEEN FORMATTED FOR EASY PRINTING
Television coverage

Analysts and anchors struggle to reconcile predictions and results 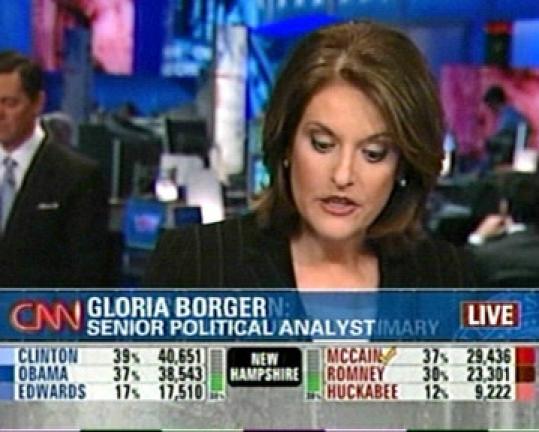 They spent most of the evening, live, trying to square the past week's soaring coverage about Barack Obama's campaign - the general predictions of a broad Obama victory - with the fact that Clinton led Obama at the polls throughout the night.

When the early returns came in, and Clinton was up by a few percentage points, the networks and cable news anchors said it was too early to even suggest she might win. Then, as she sustained her lead, there were acknowledgments of confusion: "The statistical models are not yielding a clear winner," muttered Michael Barone of Fox News.

Soon, though, as Clinton's victory became clear, the anchors and political analysts scrambled for explanations.

By about 10:30, both the Associated Press and MSNBC announced that the New York senator had won; Fox and CNN held off on their projections, but only for about 20 more minutes.

In a sense, the networks must have been relieved, given how quickly the election-night drama ended on the Republican side.

Fox News called the GOP primary for John McCain at 8:10, barely 10 minutes after the polls closed, followed within minutes by MSNBC and CNN. Then, coverage of the GOP primary became a matter of drop-ins to headquarters; the countdown to McCain's victory speech; the reviews of the speech itself.

Fox's Brit Hume said McCain made "a speech at some length" that aimed at "being noble."

The NBC anchor emeritus seemed to want to fill the newsman-of-the-colorful-metaphor role vacated by CBS's Dan Rather. After McCain's speech, Brokaw said that he'd received an e-mail from a friend in Montana panning McCain's speech. Brokaw quoted the e-mail: "I'll bet McCain's victory speech drove his supporters into deep regret and the owners of NyQuil into despair."

"Nobody here tonight," MSNBC anchor Keith Olbermann quipped shortly afterward, "can be accused of kicking this man while he's down."

How else to pass the time before the results of the Democratic race was in? Viewers could marvel at CNN's massive, multileveled set. Or get dizzy looking at Fox News's graphics.

In the end, the Clinton campaign was celebrating long before the networks acknowledged it could. At one point, Hume interrupted his own analysis to chuckle at live footage from Clinton headquarters in Manchester.

"The Clinton people, they're jumping and dancing," he said. "It's nice to see a little joy, you know."

Ultimately, the TV news folk seemed to share that joy. NBC's Tim Russert, subdued for most of the night, resumed some of his post-Iowa-caucus exuberance shortly after Clinton's victory speech. "One of the greatest political upsets in American political history. Underscored," he said on MSNBC. "This is the political equivalent of Ali-Frazier."