Backers say Obama can regain world's respect for US 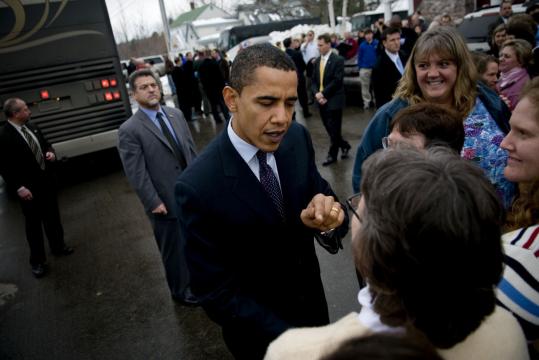 CONCORD, N.H. - Ever since 2004, when Democrats barely mentioned America's declining popularity in the world, the conventional wisdom in Washington has been that US voters don't really care what people in other countries think of them. It may have been sound politics in a country that remained in a post-9/11 defensive crouch, but much has changed over the last four years. Now, restoring America's esteem in the world is a prime motivation of voters supporting Barack Obama for president.

To most appearances, the Iraq war has faded as a political issue, with all the major presidential candidates in each party agreeing on a strategy - withdrawal for the Democrats, maintaining the gains of the troop "surge" for the Republicans.

But even as candidates discuss healthcare and energy independence and global warming, the war looms behind every position. It is the money that would pay for healthcare, the reason to reduce dependence on foreign oil, and the greatest illustration of the Bush administration's unilateral approach to foreign policy that some blame for US inaction on global warming.

And ending those unilateral policies is the most visible reason that voters are flocking to Obama's promise of a new era in politics: Democrats are hungering for Obama as an international symbol of change.

It's a deceptively risky line because Republicans and some Democrats have long equated any acknowledgment of America's responsibility for its low image in the world with siding with US enemies and/or condescending European allies. And other countries have been as unpopular as ever in this year's presidential race, at least within the GOP.

In the Republican presidential race, some American allies have become so demonized that they're invoked as punch lines: France, as a symbol of arrogance and socialism; India, as a threatening economic competitor (along with China); and Mexico, as the prime source of illegal immigrants.

It's a rare campaign appearance at which Rudy Giuliani, Mitt Romney, or John McCain doesn't mention all of those countries in vaguely ominous ways - except France, where all the Republican candidates joke about the irony of a pro-American president, Nikolas Sarkozy. "It shows if you live long enough, anything can happen," quipped McCain.

But Democrats aren't laughing along. For some Democratic voters interviewed on the streets of New Hampshire, the need to change America's image in the world is the best reason to support Obama over Hillary Clinton or any other Democrat.

Both candidates have vowed to change President Bush's policies and take quick action to change the image of the United States, with Clinton promising to take action even before taking office. She has a plan to send famous Americans overseas as good-will ambassadors immediately after November's election.

But many Democrats believe that the symbolism of having Obama - the son of a "father from Kenya and a mother from Kansas," as he puts it - as the commander in chief would have a greater impact on America's image than all of Clinton's outreach efforts.

"I think people think of the president of the United States as a white Anglo-Saxon all-American boy," said Nancy Harris, 46, of Manchester, who is volunteering for a presidential candidate - Obama - for the first time in her life. "To see someone who is a man of color will make a difference. It will create a positive image - that America isn't stuck up."

Charlie Anderson, a 25-year-old student at the Kennedy School of Government, said he volunteered with Obama in part because he read Obama's first book, "Dreams From My Father," and felt the senator from Illinois would be an instant curative to the Bush foreign policy.

"Reading 'Dreams From My Father' made me feel, wow, this is a man who can walk in many people's shoes," said Anderson, who is from North Carolina.

Added another Obama volunteer, Maria McNaught, 59, of Merrimack: "We are isolating ourselves more and more. This isn't a kingdom. We're supposed to do things with other countries."

If Obama wins the Democratic nomination, his internationalism will face a tough test in the general election. Clinton and some other Democrats balked at his eagerness to negotiate with Iran's president, and Republicans will do all they can to convince voters that Obama thinks American arrogance is responsible for its low popularity in the world.

That's not precisely what Obama's saying. But he comes close enough to saying it that the 2008 presidential election could yet become a referendum on Bush's foreign policy - and how far America should go to reconnect with the world.

Peter S. Canellos is the Globe's Washington bureau chief. National Perspective is his weekly analysis of events in the capital and beyond.