THIS STORY HAS BEEN FORMATTED FOR EASY PRINTING
REPUBLICAN RACE 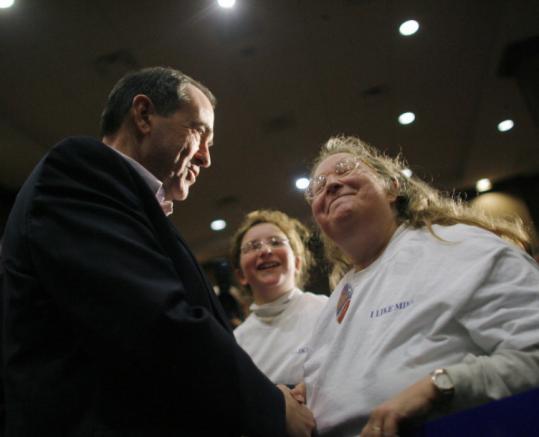 "I wasn't sure I'd ever be able to love a state as much as I love my home state of Arkansas, but tonight I love Iowa," Huckabee said. "Tonight what we've seen is a new day in American politics. . . . We've learned that people really are more important than the purse."

The Iowa results left Mitt Romney, who led in the polling here for months before being overtaken in a late push by Huckabee, a distant second and needing to find a way to keep alive his strategy of securing the nomination by building momentum in the early primary and caucus states.

Preliminary results showed Senator John McCain of Arizona, who barely campaigned in Iowa and instead focused on New Hampshire, locked in a tight race with former senator Fred Thompson of Tennessee over third-place bragging rights.

Representative Ron Paul of Texas, an antiwar libertarian, was close behind them in fifth place. Former mayor Rudy Giuliani of New York, who also skipped campaigning in Iowa, trailed far behind in sixth.

The unexpected twists of the Iowa caucuses left GOP candidates across the board scrambling to figure out their next move. Conceding the victory to Huckabee on Fox News, the well-funded Romney emphasized that he sees the race as a "50-inning" baseball game that has only just begun. He noted that when the campaign began, he polled in the single digits.

"I'll come in number two [in Iowa] and that's a lot better than where I started," said Romney, whose concession filled a huge television screen in the corner of Huckabee's post-caucus headquarters and prompted cheers of "We like Mike!" among his volunteers.

But as focus shifts to the Granite State, the former Massachusetts governor also faces a resurgent challenge from McCain, whose campaign appeared to be on life support last summer but in opinion polls has pulled within striking distance of besting Romney in New Hampshire - a potentially devastating blow in Romney's backyard.

McCain last night issued a statement congratulating Huckabee and thanking his own Iowa supporters and staff, then quickly turning the focus to New Hampshire, whose primary voters gave him a victory over then-Texas governor George W. Bush in the 2000 campaign.

"We started this together, New Hampshire, eight years ago. In five days, we're going to send the same message we did then: Change is coming," McCain said.

But the big story of the night on the GOP side was Huckabee and the passionate following of evangelical Christians who propelled him from an asterisk to the top of Iowa's results. Huckabee's shoestring-budget campaign used an army of volunteers to outpace the better-funded campaign of Romney, who barraged Huckabee with negative ads in the closing week.

A Fox News entrance poll indicated that late-deciding voters broke Huckabee's way 27 percent to 20 percent, suggesting that the attack ads did not work.

"This is the beginning of a great, great march to the presidency," said Huckabee's national campaign chairman, Ed Rollins. "The voters of Iowa are to be congratulated because they didn't pay attention to the millions of dollars spent on negative advertising."

Still, despite his popularity in Iowa, Huckabee faces a less sympathetic audience in New Hampshire. Entrance polls suggested that three out of five Republican caucus-goers yesterday identified themselves as evangelical Christians, but New Hampshire Republicans are driven more by fiscal conservatism than social issues.

"The more people listen to Huckabee, the more they like him, so [the caucus results] will say to the people of New Hampshire that hey, this guy is not a fluke," Crawford said.

The Thompson and Paul camps, meanwhile, weren't eager to talk last night. Darrel Ng, a Thompson spokesman, wrote via e-mail, "We aren't saying anything until all the votes are counted."

Paul's Iowa spokesman also declined to comment on the fifth-place finish, referring calls to a national spokesman who did not answer his cellphone. Still, Paul's campaign has a life of its own. His unconventional mix of views has attracted a small but passionate following in New Hampshire, and he raised more money than any other candidate in the fourth quarter of 2007.

The flurry of attention to the other candidates left Giuliani, who lagged far behind in polls in Iowa, out in the cold. With his stance advocating abortion rights, Giuliani has had trouble winning voters in the earliest primary states, and largely abandoned campaigning in Iowa in the hope that he will instead score big in Florida at the end of the month.

Without naming the former mayor, Rollins suggested last night that Giuliani's strategy might have been a mistake.

"Iowa is always going to be the road to the White House," he said. "Anyone who ever again says 'I don't have to come to Iowa' does so at their own peril."

But some analysts said Giuliani could benefit from upsets and upheavals in both Iowa and New Hampshire - any scenario that would keep the race open enough for him to make a comeback later this month.