THIS STORY HAS BEEN FORMATTED FOR EASY PRINTING
THE RUNNER-UP

Says Huckabee is not polling as well in N.H. 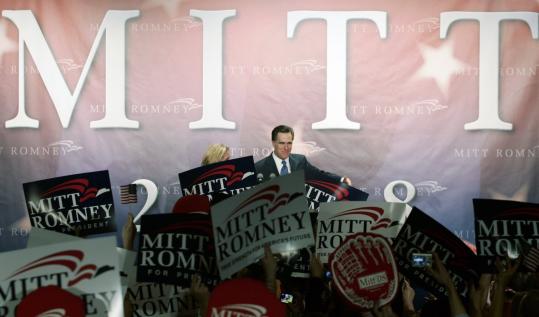 WEST DES MOINES - Mitt Romney held 237 meetings with Iowa voters, visited 67 Iowa counties, aired $7 million worth of TV ads, and vastly outspent his rivals to vault himself from the Massachusetts State House to the White House.

But last night his presidential bid appeared more tenuous after he failed his first test: to convince the conservative Republicans and evangelical Christians who dominate Iowa's caucuses that he is their champion, ready to lead the nation after President Bush.

Mike Huckabee, who campaigned on a shoestring budget, won the Iowa caucuses decisively, despite Romney's withering attacks on his record of tax increases, pardons, and tuition breaks for illegal immigrants. With 86 percent of precincts reporting, Huckabee had 34 percent to 25 percent for Romney.

Last night, Romney congratulated Huckabee, took pride in his second-place finish, and noted that Huckabee is not polling as high in New Hampshire, which holds its primary on Tuesday.

"Well, well, we won the silver," Romney told hundreds of sign-waving supporters at the Sheraton West Des Moines, where he was joined by his wife, five sons, their wives and children, and the Olympic speed skater Dan Jansen. "But just as Dan Jansen pointed out - you win the silver in one event, it doesn't mean you're not going to come back and win the gold in the final event."

Putting the best spin on his loss, Romney noted that Huckabee, and the Democratic winner in Iowa, Barack Obama, are both considered Washington outsiders, a mantle he has claimed. Looking ahead to the race in New Hampshire against longtime US Senator John McCain, he said: "We need new faces in Washington, and I intend to be one of them."

But the loss represented a stinging defeat for Romney, who poured $17 million of his own fortune into his campaign as of Sept. 30, and outspent Huckabee 17 to 1 in Iowa. He had also been campaigning in Iowa vigorously and methodically, enlisting hundreds of volunteers, and barnstorming the state by plane and Winnebago.

"Almost anyone can salvage some hopeful statement," Rutgers University political scientist Ross K. Baker said last night. "But I think Romney is the one who is going to have a hard time spinning this into anything but a very shocking defeat. He planted the flag in Iowa, he planted it on that mountaintop, and someone came and took it away."

"What you have is a lot of voters who are evangelical who identify with someone who is evangelical," Madden said. "I don't know if that made the difference. But based on what we do know, I think there are a lot of people who will make that assessment."

At the Sheraton, supporters somberly watched as the results scrolled across TV screens.

"This country needs a leader and Huckabee is not the type of leader we need," Aldrich said. "I'm a Christian, but I think there are too many people for Huckabee who got wrapped up in the Christian part of this."

Romney has had his eyes on Iowa since 2004, when he made his first speech before the Iowa Republican Party. Back then, he was best known for helping to rescue the 2002 Winter Olympics in Salt Lake City from scandal. But he began to transform himself from "an unknown governor in the bluest state in America," as he called it last night, to major contender for the GOP presidential nomination.

Over the years, Romney gave dozens of speeches nationwide, raising his profile. He formed a political action committee that doled out millions to Republicans. He sharpened his positions on guns, gay rights, and immigration. He switched from supporting to opposing abortion rights. And he embraced a tone of optimism that recalled Ronald Reagan's campaign slogan, "Morning in America."

He lined up prominent supporters from the party's religious, economic, and national security wings, bolstering his claim to represent the "three legs" of the Republican coalition built by Reagan.

In his most closely watched speech, he confronted concerns about his Mormon faith by declaring that Jesus is his savior and that he wants to nourish the role of religion in public life. "Freedom requires religion," he told the invited audience last month at the George H. W. Bush presidential library in College Station, Texas.

Challenged by the rise of Huckabee in Iowa and McCain in New Hampshire, he launched ads criticizing their records on taxes and immigration. The ads helped him stay competitive in both states but tested voters' patience.

"I just don't like negative campaigning," said Alexis Warden, 32, who questioned Romney about his ads during one of his final campaign appearances yesterday. "I think they should focus right now own what they can do and not what the other person is doing."

Richard Land - the president of the Southern Baptist Convention's Ethics & Religious Liberty Commission, who had urged Romney to give the speech addressing his Mormonism - said the results showed the continued power of conservative Christian voters.

"The message coming out of Iowa is that the headlines about the demise of the so-called values voters and religious voters have been greatly exaggerated," Land said by phone last night. "[Romney] is going to have to rely on other elements of the Reagan coalition in states where Huckabee has had the opportunity to campaign on a sustained basis."