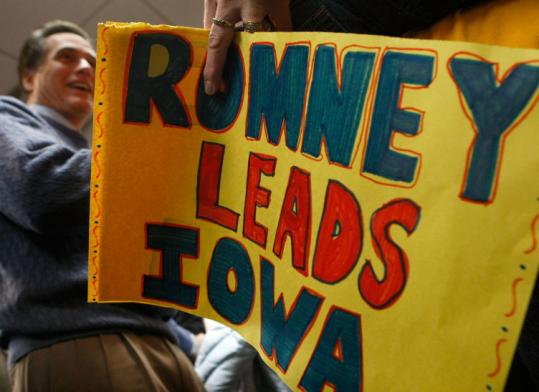 OTTUMWA, Iowa - Mitt Romney had just listened to his wife, Ann, tell about 100 people at the Ottumwa Country Club about their "five wonderful sons" when the subject turned to the Iowa caucuses.

"I remember what Yogi Berra said," Romney said. "He said 'I don't like forecasting, particularly if the future's involved.' "

Romney has been telling the joke all week, as he crisscrosses the state in a Winnebago dubbed the Mitt Mobile. But his refusal to make predictions has only added to the sense of uncertainty surrounding his final, crucial push to Thursday's caucuses.

The latest polls show the former Massachusetts governor at the top or within striking distance in Iowa and New Hampshire. But he is also being dogged by questions about his shifts on issues, questions his aides had confidently predicted would have vanished by now. Rather than being put to rest, the queries have mushroomed into new attacks on Romney's character.

His chief rival in Iowa, Mike Huckabee, a former governor of Arkansas, all but called him a liar last week. Romney's chief rival in New Hampshire, Senator John McCain of Arizona, likened him to a pig. Meanwhile, an independent group supporting Huckabee launched an ad replaying clips of Romney making varying statements on abortion.

"I've been pretty blunt about it: If you aren't being honest in obtaining a job, can we trust you to be honest if you get the job?" Huckabee said yesterday on NBC's "Meet the Press," in comments aimed at Romney.

Romney is fighting back in two ways. He is running hard-hitting ads criticizing McCain and Huckabee for their records on taxes and immigration. And he is barreling into coffee shops and community centers across the state with an unflappably sunny message of love for family and readiness to lead.

Throughout the campaign, Romney's smiling family has been his most important calling card - a way of defusing concerns about his Mormon faith and implicitly drawing attention to the more chaotic personal lives of some of his GOP rivals. Now, as his trustworthiness is being questioned, Romney invokes his family as his greatest character witness.

"There's no question in my mind that the greatest accomplishment and source of happiness and joy in my life is our five sons - they're all married, they have their kids," he said in Ottumwa. "Family - and the values that families teach children - is what gives us our greatest source of joy in this country and gives me my sense of optimism."

Racing from tiny farming towns in the state's far northwest to the country club ballroom in the far southeast, Romney regaled audiences with tales of his father's proudest accomplishment (raising four children), his 38-year marriage to his "sweetheart," and his son Josh's visits to all 99 Iowa counties in the Mitt Mobile.

When Romney mentioned other issues, it was only to list those he wishes to tackle: radical violent jihad, the economy, dependence on foreign oil. He shook hands and posed for photos, but took no questions and never mentioned McCain or Huckabee by name, ensuring he stayed upbeat.

"No one votes for yesterday. We vote for tomorrow," Romney told a packed house at the Smokey Row coffee shop in Pella. "Elections are about the future. Our future, our families' future, our nation's future."

The pitch represented the culmination of a candidacy first envisioned four years ago by a few advisers jawing over steak at Morton's in Washington, D.C. Right from the start, the goal was to position Romney as the strongest conservative in the race. In his first speeches in the national spotlight, he joked that governing liberal Massachusetts made him feel like a "cattle rancher at a vegetarian convention."

But unlike with Reagan, Romney's shift on abortion sparked greater scrutiny of his evolving views on gay rights and illegal immigration, and cast more attention on his misstatements about his hunting and his claim to have seen his father march with Martin Luther King Jr.

Some analysts say Romney left himself open to questions about his character because he never established a compelling narrative about his life story as a successful businessman, chief of the 2002 Winter Olympics, and governor.

"A lot of Republicans were hit with these flip-flops and said, 'We've got John Kerry, basically' - he was for abortion before he was against it - and they were confused," said Daron Shaw, a University of Texas political scientist who worked on President Bush's campaign in 2000. "He's had to work furiously to give them some context, to dirty up some of the other guys, to level the playing field a little bit. So, he's in trench warfare."

A Los Angeles Times survey published this month suggested voters still harbor doubts. The survey asked Republican voters: "Regardless of your choice for president, who do you think has been best at saying what they believe, rather than saying what they think the voters want to hear: Rudy Giuliani, Mike Huckabee, John McCain, Mitt Romney or Fred Thompson?"

Some Iowa voters have forgiven Romney for his shifts and others say he has hurt his credibility. Wherever they stand, thousands have seen Romney up close: He has visited 67 Iowa counties and held more than 200 meetings with Iowa voters.

But Mel Kiner, 74, a retired school administrator, shrugged off such concerns.

"Hey, if you're going down the wrong road, and you don't turn around, that's not very smart, either," Kiner said after a Romney rally in Altoona. "I think he will live by what he says."

Ron Kaufman, a Romney adviser who was George H.W. Bush's White House political director, said questions about Romney's character will disappear - if Romney can win the Republican nomination. A McClatchy/MSNBC poll released yesterday showed Romney has gained ground on Huckabee in Iowa and the two are now statistically tied, at 27 and 23 percent, respectively.

"Nothing changes the dynamic of races more than someone winning," Kaufman said. "All of a sudden, they view you differently. It raises your stature. It changes the way people look at you."

Romney said he is doing all he can to win.

"I'm not just fighting here in Iowa," he said in Pella. "I'm also fighting in New Hampshire to make sure I can win there, too. . . . If I get this nomination, I can win the presidency."