From Dean stumble, a lesson that careful canvassing is key

Out-of-state volunteers given a lower profile 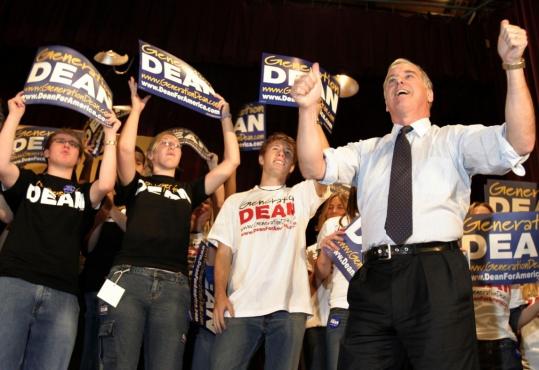 Howard Dean was cheered by hordes of volunteers after his introduction Oct. 5, 2003, at the University of Iowa. His campaign's "perfect storm" strategy in Iowa backfired, however. (Getty Images file photo)
Email|Print| Text size – + By Sasha Issenberg Globe Staff / December 27, 2007

DES MOINES - Volunteers who accept Barack Obama's invitation to "change the world" and want to start by helping him in the must-win Iowa caucus are not asked by the campaign for evidence of their enthusiasm, but for a travel itinerary. If they don't have transportation or a place to stay in the state, the Obama campaign gently tells supporters to stay home.

Ever since hordes of "Clean for Gene" college students came to New Hampshire and helped Eugene McCarthy shock President Lyndon B. Johnson in the 1968 primary there, Democrats have seen youthful vigor and youthful free time as the fuels of a successful candidacy.

This year, however, campaigns are looking less at the McCarthy model and more at the cautionary tale of Howard Dean's ambitious and high-profile effort in 2004 to draw supporters nationwide to Iowa - a project the campaign proudly branded "The Perfect Storm" and one that ultimately backfired and is thought to have contributed to his loss there.

"From the Dean experience, there was some concern that out-of-state volunteers can be very helpful but they can also be a drain," said Gordon Fischer, a former Iowa Democratic Party chairman supporting Obama.

As the caucus season enters its final week, campaign strategists - typically more astute in their analysis of success than of failure - are reexamining Dean's 2004 collapse and taking away lessons, about everything from media strategy to door-knocking etiquette to staff dress codes, shaping the way they approach the closing days of the race.

The "perfect storm" strategy called for thousands of volunteers to blow into Iowa to turn out the 50,000 or so votes that had reportedly been pledged to Dean. But as the onetime front-runner began to stumble on his way to a third-place finish, those volunteers - distinguished by their glowstick-orange hats, stubborn fervor, and unfamiliarity with local concerns - seemed to represent all that was wrong with the campaign.

"It was sort of an invasion," said Andy McGuire, a Dean activist and former lieutenant governor candidate now supporting Hillary Clinton. "Iowans shun that. They don't appreciate being told how to vote."

For the Obama and Clinton campaigns, which appear to have drawn particular interest across the country from new voters and would-be volunteers, the intimate character of the Iowa caucuses presents a particular challenge of integrating grass-roots zest into the corporate hierarchy of a campaign organization.

While not turning away out-of-state supporters, the Clinton campaign is using them for low-profile roles such as driving vans or holding signs outside events. "They're much more likely to be doing things that are removed from voters," said Hicks. "They're not doing a lot of door-to-door."

It is difficult today to find anyone who was around the caucuses in 2004 who doesn't have a story of the doorstep culture clash: Dean canvassers with piercings and colored hair, unable to pronounce the town's name or respond to questions about the candidate's platform. Instead, they were instructed to emphasize the extent to which they didn't belong.

"I dropped everything and drove/came all the way from ___," read a telephone script given to Dean's supporters. "I'm volunteering here because we need a candidate who can stand up to George Bush and take our country back. That's why so many of us have come to Iowa." If voters "get upset and try to cut you off," callers were instructed, "assertively tell your story."

To Iowa caucus-goers - who tend to be older, insular, and serious - those stories were not well received. "Iowa can be a little parochial, but we are friendly, polite, welcoming folks," said Fischer. "It is a problem if folks can't articulate specific positions of the candidate."

Now the canvassing stories that circulate are about Clinton workers braving the snowy Iowa winter in jackets and ties. "People are expected to look tidy and professional," said Hicks. "They're representing the next president of the United States."

As campaigns attempt to impose standards on what volunteers say or do, they run the risk of discouraging their supporters, said Matthew Hindman, a political scientist at Arizona State University. "All three of the major Democratic campaigns are trying to walk the line between energizing the base and giving up too much control over your message," said Hindman. "They clearly understand that better than they did four years ago."

Some voters who had committed to Dean early had wavered by the caucus date, confusing his campaign's efforts to turn out confirmed supporters. This year, canvassers have been returning frequently to voters to check their commitment.

"There's not a two-week period where we're not talking to a supporter personally," said Hicks, "rather than talking to somebody back in May and assuming they're with you in January."

"Campaigns are being more cautious and conservative about their hard counts" of certain votes, Fischer said. Instead of accepting verbal commitments, canvassers say they are not identifying a voter as a definite supporter until he or she has personally signed a card pledging support.

Like Obama and Clinton, polls showed Dean with particular appeal among those unfamiliar with the state's peculiar caucus system, which requires voters to show up at a particular time and publicly declare their preference. But many of Dean's volunteers, who had as little as 15 minutes of training, focused their attention on persuading voters instead of on the complex mechanics of voting in Iowa.

This year, time at rallies that might once have been spent trying to energize a crowd is devoted to asking how many attendees had ever caucused before and explaining the differences between a caucus and a standard election day. Ordinary caucus-goers are invited to receive more training than many of Dean's volunteers did, thanks to training videos and "mock caucus" events that are designed to demystify the process.

McGuire, recalling the problems she encountered in 2004 while supporting Dean, said: "I don't think we realized how much people wouldn't show up. They would vote for Dean - but even though they were for him, they didn't know about caucusing at all. You can support someone all you want, but unless you caucus, it doesn't mean a thing."