Both say they have greater backing 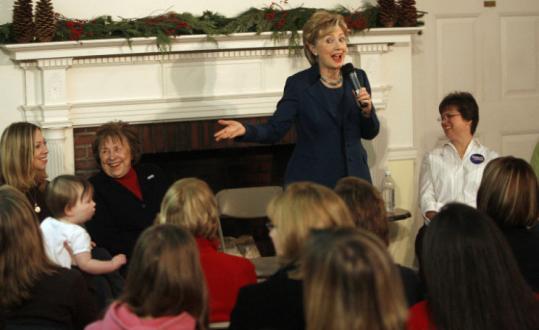 MILFORD, N.H. - Barack Obama and Hillary Clinton have opened a new front in their battle over who is best equipped to lead American foreign policy.

The latest skirmish started when Obama boasted that he has more support than Clinton does from foreign policy specialists who served in President Bill Clinton's administration.

"Why is the national security adviser, the secretary of the Navy for Bill Clinton, the assistant secretary of state for Bill Clinton, why are all these people endorsing me?" Obama asked in Iowa on Friday. "It's not just because I give a good speech. They apparently believe that my vision of foreign policy is better suited for the 21st century, and is not caught up in the politics of fear that we've been seeing out of George Bush for the last seven years."

Visiting a diner here yesterday, Hillary Clinton waved away that assertion as something that "was easily disproved," and said she had far more support in the foreign policy community. But more fundamentally, she tried to turn the issue around and use it against Obama, suggesting his crowing about his advisers was a way to mask a personal lack of experience on the issue.

"I'm not holding myself out by leaning on advisers. I'm saying, here I am, here's what I believe, here's what I've done for 35 years," she said in response to reporters' questions. "When the door closes, and when you're having to make those difficult decisions that presidents confront every day, ultimately there is no adviser."

On the question of who has more Bill Clinton foreign policy veterans, both sides could be accused of fudging. The Obama campaign said his assertion was based on a Magazine article that described an enormous reservoir of support for Obama in foreign policy circles, but that story was based in part on anonymous sources and did not say it represented a specific count.

In response, the Clinton campaign offered a list of 83 foreign policy advisers. But some of them were minor ambassadors or people who made their names primarily in other arenas or other eras, such as Walter Mondale, former vice president.

After Hillary Clinton's remarks yesterday, Obama spokeswoman Jen Psaki shot back again, saying, "If Senator Clinton wants to make this election about who's made the best decisions on foreign policy, that's a comparison we're happy to make since Barack Obama is the only major candidate who opposed the war in Iraq and refused to give George Bush the benefit of the doubt on Iran."