In N.C., drought puts a damper on sales of real Christmas trees 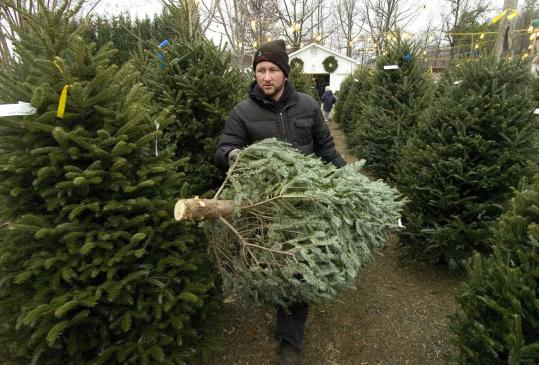 GREENSBORO, N.C. - Carli Bailey is getting an unwanted gift under her 6-foot Christmas tree in Durham, N.C.

"The needles are falling off awfully fast," said Bailey, 28, who is eight months pregnant and still vacuums daily.

"It's making me a little crazy. Every time I walk into the room, there seems to be a big pile of needles."

A record North Carolina drought and temperatures close to 80 degrees Fahrenheit this month are creating trees like the one in "A Charlie Brown Christmas," the 1965 animated television classic in which a forlorn fir's branches are bare.

North Carolina, the largest US seller of cut trees last year for the holiday, may contribute to a second straight season of declining sales, the National Christmas Tree Association predicts.

More consumers are skipping outdoor lots and buying artificial trees. Some who choose real ones are paying higher prices after the drought pushed up farmers' costs.

The state's crop of 5 million Christmas trees sold for $134 million last year at retail. Its 1,600 growers raised about the same number this year, shipping them across the country. Most are Fraser firs grown in the western mountainous area around Asheville.

"They are drying out quickly," said Eric Cobb, manager of the Fred & Dot Wagoner Christmas Trees lot in Greensboro, where buyers shopped in shorts and flip-flops.

Cultivating trees has been a struggle. The lack of rain, which also caused water shortages in Florida, Georgia, and Alabama, killed as many as 40 percent of saplings. Money spent on fertilizer was wasted because the parched earth couldn't absorb it. Rainfall in Asheville was 35.4 inches through Dec. 17, a quarter less than normal, according to the National Weather Service.

Governor Michael Easley called on residents to cut water use by half in October, saying the drought is the worst on record.

Two-thirds of North Carolina is in an "exceptional drought," the most severe category, according to the US Drought Monitor in Lincoln, Neb.

Higher costs for fertilizer, fuel, and labor prompted James Pitts in Plumtree to increase prices on his trees for the first time in four years. An 8-foot tree sells for about $76 retail, 19 percent more than last year.

Most farmers held the line on prices to remain competitive with artificial trees. Consumers paid an average of $40.50 for cut trees last year, according to the Christmas tree association.

"We don't expect a tremendous increase in sales because we are combating the artificial trees," said Linda Gragg, executive director of the North Carolina Christmas Tree Association in Boone.

Dry or shedding trees could persuade more consumers to switch to artificial ones next year, said Chris Wilcox, 43, owner of Appalachian Evergreens in Boone. He started shipping his products to nurseries in Chicago, St. Louis, and Indianapolis in early November.

"It's not Christmas if you don't have a real tree," said Bailey. "I'll never buy an artificial tree."

Jeff Owen, a North Carolina State University forestry specialist in Fletcher, visited mountain farms in October and concluded that 6 inches of rain that month replenished trees. A cold snap set the needles, making them less likely to fall out, Owen wrote in an Oct. 30 advisory posted on the North Carolina growers association site.

Growers say that when retailers keep trees in the sun, the needles can become pale or brittle. "We try to encourage retailers to display the trees in shade and keep them in water," Gragg said.

Bill Shea, a Greensboro mortgage banker, said his 7 1/2-foot tree is holding up well, thanks to daily watering. "I've never had a tree drink so much," he said.

Others aren't faring as well.

"I have never had the needles drop off this quickly," said Aimee Bostic, a Greensboro church secretary who bought hers Dec. 1. "I hope my tree is still green at Christmas."

One North Carolina tree had no trouble getting enough water despite the drought - the one displayed in the White House.

Joe Freeman, owner of Mistletoe Meadows Christmas Trees Farm in Laurel Springs, used 250 gallons a week to water the tree with a garden hose and sprinkler before it was cut down.

"I wanted to be sure it had a nice green color," he said.