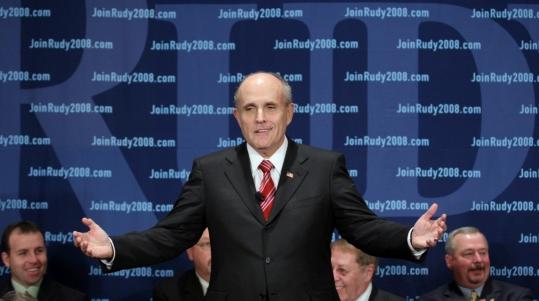 His national front-runner status evaporating and his fortunes fading in the early-voting states, Republican presidential candidate Rudy Giuliani spent yesterday not in Iowa or New Hampshire - where his major GOP rivals are trying to create their own tailwind - but in Missouri.

As new polls released yesterday showed him falling to a distant fourth in Iowa and a distant third in New Hampshire with only two weeks before the first votes are cast, his campaign has all but written off Iowa while simultaneously cutting its advertising budget in New Hampshire, where the first primary will occur on Jan. 8, five days after Iowa. Even Florida, where he is counting on a big win, looks less like a sure bet. Also, a new national poll shows him in a tie with Mitt Romney.

Missouri is one of the more than 20 states that will vote on Feb. 5, the Super Tuesday primary day that has become the cornerstone of the unconventional Giuliani strategy: Weather losses in some or even all the early contests, but recover on Feb. 5 in states such as New York, Illinois, and California, with their large blocs of delegates to the Republican National Convention next summer.

Giuliani's campaign schedule indicates that he will spend this weekend in New Hampshire, pause Monday and Tuesday for the Christmas holiday, and then spend the next three days in Florida, which votes Jan. 29 and where some new polls suggested his once solid double-digit lead has shrunk to single digits. The schedule says he might be in Iowa on Dec. 28, but the campaign has not disclosed any public events in the six-day period leading up to Iowa. He continues to set aside more time than the rest of the Republican field for fund-raising.

"What you're seeing is normal behavior for an abnormal strategy," said Stuart Rothenberg, the editor and publisher of the nonpartisan Rothenberg Political Report. "This is like people came down from another galaxy, and they have a whole different strategy, and the mortals on earth are scratching our heads. Maybe they're clueless; maybe they're brilliant. We won't know for another month."

Giuliani defended his game plan yesterday, unwilling to concede that he would lose in the early states and expressing confidence that he is ahead in many other states.

"I kind of look at it as a nine-inning baseball game," he said on CNN's campaign bus in Missouri. "And I know I'm going to lose a few. And I'm hopefully going to win most of them."

He still makes the same case that many analysts believed - that he could be the most formidable Republican in the general election because of his more moderate views on social issues and his performance as New York's mayor after the Sept. 11 terror attacks. But the most recent national polls indicate that the rest of the Republican field has gained on Giuliani.

After a tough three weeks during which his polling numbers tumbled in key states and nationally, he is often absent from the day-to-day media coverage of the campaign and has made little effort to engage his opponents or generate news. While his rivals have bagged endorsements, made headline-grabbing speeches, and laid out policy plans, Giuliani has pursued his own course. He hasn't announced a major initiative in months, hasn't fleshed out the details of many proposals he sketched early in the campaign, or added new material to his basic stump speech.

Last week, his campaign tried to attract media coverage by promising what it called a "major" address in Tampa on Saturday. He took the wraps off a new slogan - "Tested. Ready. Now." - and reframed the essence of his 50-state strategy. But the speech broke no new ground in terms of policy or politics. Reporters who attended said it appeared the campaign was using the event to provide material for a future television commercial.

Giuliani's campaign did not respond to an e-mail seeking comment on the Florida speech.

Being out of the news may not be all bad, however.

Until late November, Giuliani had a clear lead in the national Republican polls, was generally above 20 percent and in second place in New Hampshire, and was in the double digits in Iowa polls. But since then, he has faced scrutiny and tough stories about his messy personal life, his footloose use of facts and statistics, his relaxed immigration policies while mayor, and the shadowier aspects of his consulting business and its clients, whose identities he has refused to divulge, citing confidentiality agreements.

A new Wall Street Journal/NBC News poll shows he has lost his national lead, and the race could be the most competitive in decades. Conducted from Dec. 14-17, the national poll found Giuliani with 20 percent, Romney with 20 percent, and Mike Huckabee with 17 percent. John McCain was fourth with 14 percent, and Fred Thompson trailed with 11 percent. Giuliani's favorable and negative ratings were even, down from highly positive assessments earlier in the year. The poll had a margin of error of 5.2 percentage points.

His slugfest intensified with Romney over their records on immigration, taxes and spending, and personnel appointments. And he spent days responding to a Nov. 28 report in The Politico that linked Giuliani's extramarital affair while mayor to expense records of his security detail being scattered among obscure city agencies.

As Giuliani began to slide in the polls, others, particularly Huckabee, have gained.

Romney has maintained his lead in New Hampshire polls, but has fallen behind Huckabee in Iowa and has been unloading on the former Arkansas governor at every opportunity. Huckabee has also leapt to the top in recent polls in South Carolina, which holds its GOP primary on Jan. 19.

In the meantime, McCain, the senator from Arizona who has landed a bundle of prized endorsements, has revived his candidacy, pulling ahead of Giuliani into second place behind Romney in New Hampshire in five of six recent surveys. Unless the trends change, Giuliani could finish no better than third in any of the early states before the must-win primary in Florida, and he is in danger of dropping even lower in some.

The theory that Giuliani could be shut out in the early states but somehow emerge stronger than candidates who actually won one or more of those contests defies history. "It's never worked before, but it is their strategy," said Jennifer Donahue, senior adviser at the New Hampshire Institute of Politics at Saint Anselm College in Manchester.

Donahue is perplexed by the pullback, at least in terms of ad dollars, of Giuliani's campaign in New Hampshire, where a TV ad blitz in the last month failed to improve his poll standing.

"It doesn't make sense, to be honest with you, because there are plenty of reasons for him to think that independents here are going to like him," Donahue said. Giuliani's fiscal conservatism and moderate social views are a better fit in New Hampshire, where "undeclared," or independent, voters may vote in either the Republican or Democratic primary, than in other early states, she said.

One problem in how Giuliani has been received by voters is the way he campaigns in the Granite State, she said. His campaign tends to hold events where there are more reporters in attendance than voters and where voters have little opportunity to connect with Giuliani, Donahue said.

"It's exactly the model of Bush 2000," she said. That year, McCain blindsided the then-Texas governor with an 18-percentage-point victory in the primary.

She was referring to the large number of Giuliani "town hall meetings" held at local businesses, where virtually all of the attendees are employees and unlikely to ask contentious questions in front of their bosses. On Monday, Giuliani had one publicly scheduled event in the state, a town hall-style meeting at Goss International in Durham. He arrived a half-hour late, spoke for about five minutes, took a half-dozen questions, and left quickly. "At a real town meeting, you post it up in the town, and the people come and you answer all their questions," Donahue said. "It's not a corporate event; they're different, though important too."

Romney has done that type of traditional retail campaigning with his "Ask Mitt Anything" events, Donahue said, and McCain is the master of the art form with his forums where he invites voters to criticize. Face-to-face campaigning in New Hampshire "offers a lot to the candidates," she said. "But if they don't take advantage of it, they come out weaker."