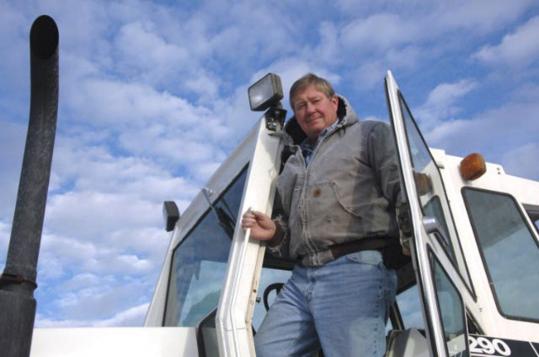 Jerry Peckumn, a farmer in Jefferson, Iowa, grows thousands of acres of corn but says he is worried about the impact his farming has on the dead zone in the Gulf of Mexico. (Henry Jackson/Associated Press)
Email|Print| Text size – + By Henry C. Jackson Associated Press / December 18, 2007

JEFFERSON, Iowa - Because of rising demand for ethanol, American farmers are growing more corn than at any time since the Depression. And sea life in the Gulf of Mexico is paying the price.

The nation's corn crop is fertilized with millions of pounds of nitrogen-based fertilizer. And when that nitrogen runs off fields in Corn Belt states, it makes its way to the Mississippi River and eventually pours into the Gulf, where it contributes to a growing "dead zone" - a 7,900-square-mile patch so depleted of oxygen that fish, crabs, and shrimp suffocate.

The dead zone was discovered in 1985 and has grown fairly steadily since then, forcing fishermen to venture farther and farther out to sea to find their catch. For decades, fertilizer has been considered the prime cause of the lifeless spot.

With demand for corn booming, some researchers fear the dead zone will expand rapidly, with devastating consequences.

"We might be coming close to a tipping point," said Matt Rota, director of the water resources program for the New Orleans-based Gulf Restoration Network, an environmental group. "The ecosystem might change or collapse as opposed to being just impacted."

Environmentalists had hoped to cut nitrogen runoff by encouraging farmers to apply less fertilizer and establish buffers along waterways. But the demand for the corn-based fuel additive ethanol has driven up the price for the crop, which is selling for about $4 per bushel, up from a little more than $2 in 2002.

That enticed American farmers - mostly in Iowa, Illinois, Minnesota, North Dakota, and South Dakota - to plant more than 93 million acres of corn in 2007, the most since 1933. They substituted corn for other crops, or made use of land not previously in cultivation.

Corn is more "leaky" than crops such as soybean and alfalfa - that is, it absorbs less nitrogen per acre. The prime reasons are the drainage systems used in cornfields and the timing of when the fertilizer is applied.

The Environmental Protection Agency estimates that up to 210 million pounds of nitrogen fertilizer enter the Gulf of Mexico each year. Scientists had no immediate estimate for 2007, but said they expect the amount of fertilizer going into streams to increase with more acres of corn planted.

Farmers realize the connection between their crop and problems downstream, but with the price of corn soaring, it doesn't make sense to grow anything else. And growing corn isn't profitable without nitrogen-based fertilizer.

The dead zone typically begins in the spring and persists into the summer. Its size and location vary each year because of currents, weather and other factors, but it is generally near the mouth of the Mississippi. Soil erosion, sewage, and industrial pollution contribute to the dead zone, but fertilizer is believed to be the chief factor.

Fertilizer causes explosive growth of algae, which then dies and sinks to the bottom, where it sucks up oxygen as it decays. This creates a deep layer of oxygen-depleted ocean where creatures either escape or die.

Given the market pressure to grow corn, the Natural Resources Defense Council and others say the nation needs a comprehensive, federal approach to the problem.