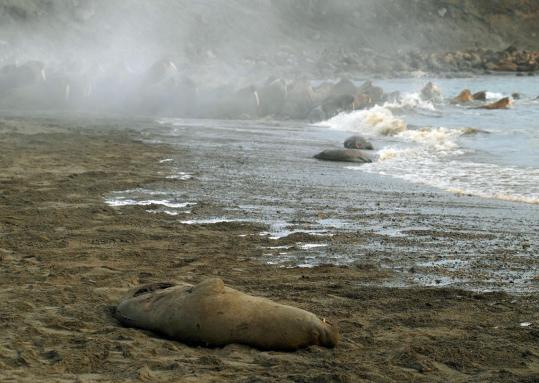 This photo showed a dead walrus after a stampede on Cape Vankarem, Russia, in March. Thousands of Pacific walruses above the Arctic Circle died in stampedes earlier this year.
Email|Print| Text size – + By Dan Joling Associated Press / December 15, 2007

ANCHORAGE - In what some scientists see as another alarming consequence of global warming, thousands of Pacific walruses above the Arctic Circle were killed in stampedes earlier this year after the disappearance of sea ice caused them to crowd onto the shoreline in extraordinary numbers.

The deaths took place during the late summer and fall on the Russian side of the Bering Strait, which separates Alaska from Russia.

"It was a pretty sobering year - tough on walruses," said Joel Garlach-Miller, a walrus specialist for the US Fish and Wildlife Service.

Unlike seals, walruses cannot swim indefinitely. The giant, tusked mammals typically clamber onto the sea ice to rest, or haul themselves onto land for just a few weeks at a time.

But ice disappeared in the Chukchi Sea this year because of warm summer weather, ocean currents, and persistent eastern winds, Garlach-Miller said.

As a result, walruses came ashore earlier and stayed longer, congregating in extremely high numbers, with herds as big as 40,000 at Point Shmidt, a spot that had not been used by walruses as a "haulout" for a century, scientists said.

Walruses are vulnerable to stampedes when they gather in such large numbers. The appearance of a polar bear, a hunter, or a low-flying airplane can send them rushing to the water.

Sure enough, scientists received reports of hundreds and hundreds of walruses dead of internal injuries suffered in stampedes. Many of the youngest and weakest animals, mostly calves born in the spring, were crushed.

Biologist Anatoly Kochnev of Russia's Pacific Institute of Fisheries and Oceanography estimated 3,000 to 4,000 walruses out of population of perhaps 200,000 died, or two or three times the usual number on shoreline haulouts. He said the animals only started appearing on shore for extended periods in the late 1990s, after the sea ice receded.

"The reason is the global warming," Kochnev said.

The reports match predictions of what might happen to walruses if the ice receded, said wildlife biologist Tony Fischbach of the US Geological Survey. "We were surprised that this was happening so soon, and we were surprised at the magnitude of the report," he said.

Scientists said the death of so many walruses - particularly calves - is alarming in itself. But if the trend continues, and walruses no longer have summer sea ice from which to dive for clams and snails, they could strip coastal areas of food, and that could reduce their numbers even further.

No large-scale walrus die-offs were seen in Alaska during the same period, apparently because the animals congregated in smaller groups on the American side of the Bering Strait, with the biggest known herd at about 2,500.